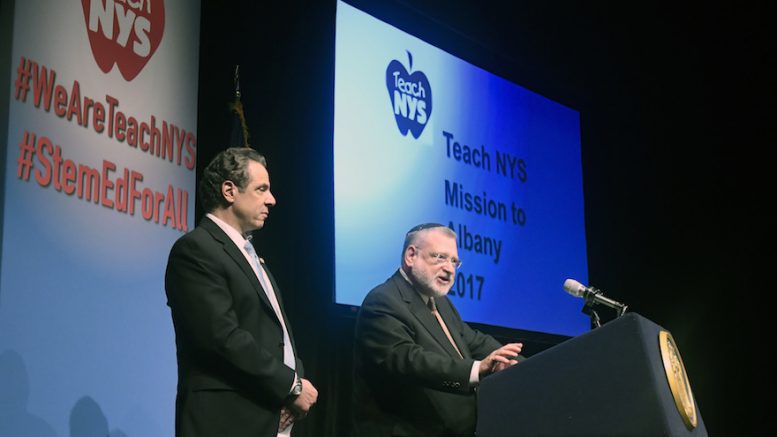 (JTA) – Even before the coronavirus pandemic hit the New York region in March, the Orthodox community was on edge.

A surge in anti-Semitic incidents targeting visibly Orthodox Jews climaxed with an attack in which a man was killed by a machete at a Hanukkah party in December. Then the virus hit, forcing the closure of many of the mainstays of Orthodox Jewish life, including synagogues and summer camps. Even with the closures, the virus exacted a deadly price in the community.

Through it all, the Orthodox Union, a synagogue membership organization that runs a range of programs and services along with the world’s largest kosher certifying agency, offered guidance to the community even as it struggled itself, furloughing 125 employees as the pandemic took hold in April.

For Allen Fagin, who has led the Orthodox Union as executive vice president for the past six years, it’s a strange time to retire – again. Fagin first retired from a decades-long law career before assuming the O.U. position.

“My wife and I came up with a whole list of things we wanted to do now that I’ve retired a second time,” he said.

For now, those will have to wait, at least until they can venture past their front yard.

We spoke with Fagin about what’s changed in the Orthodox community during his tenure and in the last few turbulent months, and the challenges it faces moving forward.

JTA: What are the biggest changes you’ve seen in the Orthodox world in the last six years?

Fagin: One relates to the issue of anti-Semitism. Anti-Semitism affects all of us, the entire Jewish community, but there are certain aspects to its resurgence that I think affect the Orthodox community in particular.

You walk on the street with a yarmulke on, and you know that everybody knows that you’re a Jew. And certainly in the last couple of months if you look in New York City at the rash of attacks on Orthodox Jews and even much more subtle comments, like the brouhaha over the mayor’s remarks targeting the Orthodox community, I think there’s an aspect to this that’s uniquely felt by the Orthodox community.

The Orthodox community over the last several decades in the United States prided itself on being able to live a full and complete and successful life in any area of endeavor that they chose. And therefore when anti-Semitism rears its head and one is easily identifiable as Jewish, that sense of achievement and the satisfaction that comes with it, becomes part and parcel of a much greater sense of unease.

When it comes to Israel and American politics, how does the O.U. represent the wide range of political opinion within the Orthodox community at a time of such intense polarization in this country?

We’ve put out very few statements on issues of the type that you’re asking about. And that’s in keeping with a longstanding policy of the O.U. that we do not take positions or comment on issues of foreign policy on the State of Israel, that we believe rightly belong to the duly elected government of the state. So we support what the Israeli government and its elected officials support as their policy. But it’s not a significant area of our advocacy efforts.

The cost of Orthodox life has risen dramatically in recent years. What do you think can be done to make an Orthodox lifestyle more affordable?

There is no question that the affordability of an Orthodox lifestyle is one of the most important and probably one of the most intractable problems that we face. Almost by definition, Orthodox communities need to be within walking distance of a shul. There is very little that can be done other than continuing to try to find new areas to expand to where housing costs can be more affordable. The other is the staggering cost of Jewish education. That’s an area that we have devoted enormous resources to over the last six years in an effort to try to bring state and local funding to parochial education.

In many respects, how people choose to educate their children might become one of the most important civil rights issues that we will confront over the next decade. In New York state, based on enrollment numbers from New York state’s Department of Education and according to the state’s latest budget, 15% of the school-age children do not attend public school and approximately 1% of state aid for education goes to private schools.

That is so far out of balance as to really question the fundamental fairness of a system that could permit that result. The other side of the coin is the enormous amount of money being saved by states who are relieved of the burden of having to educate children in non-public schools without passing on any of the benefit to the parents who have chosen to educate their kids in non-public school. Some of those savings should be coming back to non-public schools.

In light of the George Floyd protests over the last several weeks, how is the O.U. thinking about its role in addressing racism?

We issued one of the strongest statements that I’ve seen Jewish groups issue in the aftermath of the Floyd killing. Beyond that, it’s important for us to be thinking about how we foster conversation within our community, particularly among young people. Just a few weeks ago we had a very well-attended Zoom seminar for high school students exploring issues of racism and reactions to that.

I think our statement tried to reflect at least two very important considerations. The first is that racism of any kind is contrary to our religious principles, so as an organization of Orthodox synagogues, it was important to add a religious dimension to the conversation that was taking place. We as Orthodox Jews believe that racism is contrary to our Jewish values. Second, we felt strongly that racism of any kind, that hate of any type, can’t go unanswered. When we suffer from anti-Semitism, it’s our hope that other people of good will everywhere will stand up and say that’s wrong. Likewise, when we see racism rearing its ugly head, we need to stand up and say that’s wrong.

In April, the O.U. furloughed 125 employees. Can you explain what led to that and how the O.U. is doing financially at this point?

Every one of our staff members is precious to us, but there was no question when we pivoted from what had been an almost exclusively face-to-face service model to a new model that was entirely virtual, there were a number of employees who really had no function that they could play in a virtual program environment. We also selected employees who we believed would not suffer any economic loss by virtue of the furlough in terms of the state and federal benefits that they would be entitled to as a result of the furlough. The decision to bring back furloughed employees is now under active consideration.

As you can imagine, program fees, which had become an increasingly large part of our budget, essentially came to an end, including things like summer programs. And our philanthropic income, charitable giving, has diminished substantially. We’re seeing it come back slowly compared to where it was in March. We track it on a regular basis and it seems to be coming back a bit, but certainly not at the levels we saw last year.

How do you think the pandemic might shape the future of Orthodox life?

I don’t know anyone who has a crystal ball that’s good enough to help us figure out what the effects are going to be. Among those that are clear, I think we certainly have to put in that category the enormous economic dislocation that will be felt, and therefore the effects of that economic dislocation on institutions that are particularly significant for our community, included among them shuls and yeshivot and day schools.

There are many schools where applications for tuition assistance are going up – and they were already at record levels. And that means that those institutions are going to have to come up with the wherewithal to meet those requests or that some number of parents might get priced out of the ability to provide the Jewish education for their children that they desperately want to provide. Those are both tremendous concerns for all of us.

Then there’s going to be the whole panoply of mental health issues that result from social isolation. In the Orthodox community, I think there are questions about whether this profound absence from shul will have an effect. That, I think, remains to be seen. But it’s hard to imagine that after months of isolation and inability to be in that setting that that’s going to leave us with no effects whatsoever.

Be the first to comment on "Allen Fagin, head of the Orthodox Union, reflects on how the pandemic has changed Orthodox life"