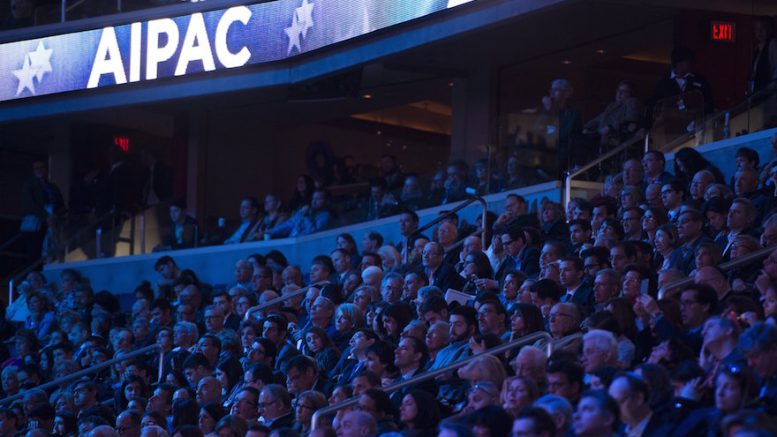 WASHINGTON (JTA) – Maintaining Iran sanctions, crushing BDS and ensuring aid to Israel are high on the agenda, of course.

But the overarching message at this year’s conference of the American Israel Public Affairs Committee is, if you want a break from polarization, come join us.

“This is an unprecedented time of political polarization, and we will have a rare bipartisan gathering in Washington,” an official of the lobby told JTA about the March 26-28confab. “One of the impressive aspects of our speaker program is that we will have the entire bipartisan leadership of Congress.”

That might seem a stretch following two tense years in which AIPAC faced off against the Obama administration – and by extension much of the Democratic congressional delegation – over the Iran nuclear deal.

But check out the roster of conference speakers and you can see the lobby is trying hard.

Among Congress members, for instance, there are the usual suspects, including stalwarts of the U.S.-Israel relationship like Rep. Steny Hoyer, D-Md., the minority whip in the U.S. House of Representatives, and Rep. Ed Royce, D-Calif., the chairman of the House Foreign Affairs Committee. Vice President Mike Pence is speaking, and so are the leaders of each party in both chambers.

But also featured is Rep. Jamie Raskin, D-Md., a freshman who had the backing of Bernie Sanders, the Democratic presidential candidate who had his request for a satellite feed at last year’s conference turned down. Also present this year and absent last year, for the most part: Democrats who backed the Iran deal.

Among the other speakers are Obama administration architects and defenders of the nuclear deal, which traded sanctions relief for a rollback of Iran’s nuclear program.

One striking example is Rob Malley, a National Security Council official who didn’t join President Barack Obama’s team until his second term in part because pro-Israel objections kept him out in the first four years. (Malley, a peace negotiator under President Bill Clinton, had committed the heresy of insisting that both Israelis and Palestinians were to blame for the collapse of talks in 2000.)

If there’s a let-bygones-be-bygones flavor to all this, it results in part from anxieties pervading the Jewish organizational world about polarization in the era of Trump. Jewish groups get their most consequential policy work done lining up backers from both parties.

“We continue to very much believe in the bipartisan model because it is the only way to get things done,” said the official, who like AIPAC officials are wont to do, requested anonymity. “This is the one gathering where D’s and R’s come together for high purpose.”

J Street, the liberal Middle East policy group, demonstrated at its own policy conference last month that it was only too happy to lead the resistance to President Donald Trump, who has appalled the liberal Jewish majority with his broadsides against minorities and his isolationism. J Street’s president, Jeremy Ben-Ami, explicitly said he was ready to step in now where AIPAC would not.

AIPAC is also under fire from the right. Republican Jews who consider the lobby’s bipartisanship a bane rather than a boon were behind the party platform’s retreat last year from explicit endorsement of the two-state solution. More recently, Trump has also marked such a retreat, at least rhetorically.

The Israeli American Council, principally backed by Sheldon Adelson, the casino billionaire who in 2007 fell out with AIPAC in part over its embrace of the two-state outcome, has attempted to position itself as the more conservative-friendly Israel lobby. The right-leaning Christians United for Israel is similarly assuming a higher profile on the Hill.

And so, in forging its legislative agenda, AIPAC is doing its best to find items both parties can get behind. There are three areas:

* Iran: Democrats are still resisting legislation that would undo the nuclear deal, but are ready to countenance more narrowly targeted sanctions. AIPAC is helping to craft bills that would target Iran’s missile testing and its transfer of arms to other hostile actors in the region.

* Boycott, Divestment and Sanctions: AIPAC will back a bill modeled on one introduced in the last congressional session by Sens. Rob Portman, R-Ohio, and Ben Cardin, D-Md., that would extend to the BDS movement 1970s laws that made it illegal to participate in the Arab League boycott of Israel.

* Foreign assistance: AIPAC activists will lobby the Hill on the final day of the conference with a request to back assistance to Israel (currently at $3.1 billion a year, set to rise next year to $3.8 billion). Support for such aid is a given, despite deep cuts to diplomatic and foreign aid programs in  Trump’s budget proposal.

Also a given will be the activists’ insistence that aid to Israel should not exist in a vacuum and should be accompanied by a robust continuation of U.S. aid to other countries. With a Trump administration pledged to slashing foreign assistance by a third and wiping out whole programs, AIPAC is returning to a posture unfamiliar since the early 1990s, when it stood up to a central plank of a Republican president.

Notably absent from the agenda is any item that robustly declares support for a two-state outcome. AIPAC officials say the longtime U.S. policy remains very much on their agenda, but the lobby’s apparent soft pedaling of the issue is notable at a time when other mainstream groups, including the American Jewish Committee and the Anti-Defamation League, have been assertive in urging the U.S. and Israeli governments to preserve it.

Be the first to comment on "AIPAC 2017 preview: Seeking a bipartisan spirit in an extremely polarized capital"