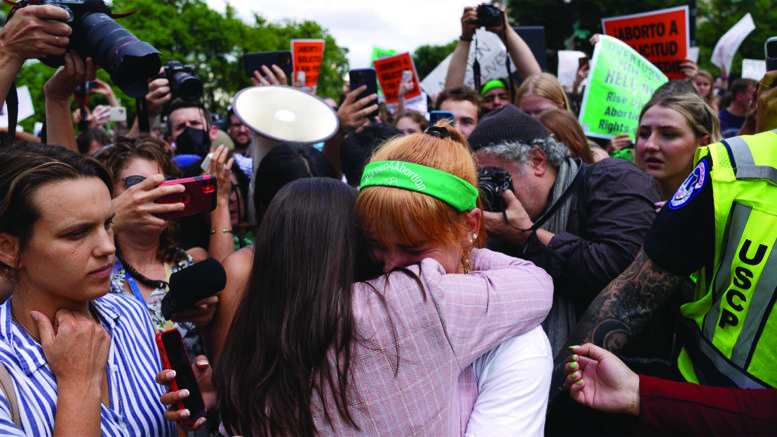 WASHINGTON (JTA) — An array of Jewish groups across the country are kickstarting into action to protest and potentially challenge the Supreme Court’s decision to overturn Roe v. Wade, the landmark 1973 case that had enshrined the right to an abortion in the United States.

The 6-3 decision released Friday has many Jewish activists buzzing about how to respond to the bombshell ruling that they find a major setback to women’s rights and in some cases an infringement on religious Jewish law.

The National Council of Jewish Women, a Jewish women’s rights group founded in 1893, said it would hold a virtual vigil on Friday afternoon before launching into actions next week that would include training Jewish groups on how to mount challenges.

“Today is a time to mourn,” said NCJW’s CEO, Sheila Katz. “After Shabbat, we will act.”

The decision also portends profound differences among Orthodox groups over how to function in a post-Roe world. The haredi Orthodox Agudath Israel of America welcomed the decision, while the Orthodox Union stood by its statement from May, when a draft version of the decision was leaked, saying that the umbrella group could neither “mourn or celebrate” the reversal of the 1973 ruling.

But most American Jews back abortion access, and Jewish groups have already taken steps to counter the decision after the draft decision was leaked.

RELATED: What do Jews say about abortion? Your primer as the Supreme Court has overturned Roe v. Wade

Katz said her group would launch briefings for Jewish organizations on the ramifications of assisting women seeking an abortion, state by state.

“We can’t provide legal advice to organizations but we can recommend that organizations seek out legal advice, particularly if they are in states where abortion has been overturned,” she said, referring to a number of states that have enacted “trigger” bans on abortion to go into effect once the Supreme Court overturned Roe v. Wade. “In some of these states, there’s legal ramifications for trying to help somebody have an abortion and everybody should know what that looks like in their states and how they’re impacted.”

The Women’s Rabbinic Network, a constituent of the Reform movement’s Central Conference of American Rabbis, in a statement pledged continued support for women seeking an abortion, and for those providing the service.

“We fully support those who have sought and are seeking abortion care and will continue to advocate for a world where they are able to do so safely, wherever they are, without fear of retribution,” it said. “We pray for the safety and wellbeing of the abortion care providers and health care workers who will be forced to decide what they are willing to risk in order to serve their patients and communities in places where abortion is now illegal.”

Rabbi Jill Jacobs, CEO of the liberal rabbi activist group T’ruah, tweeted: “Remember that when Roe v Wade came out, the right wing refused to accept their loss. They spent 50 years laser focused on un-losing. We must do the same in order to protect lives and bodily autonomy. The road will be long, but we cannot give up or turn away.”

While there is broad religious Jewish objection to abortion in cases without serious cause, Jewish law prioritizes the life of the mother.

Some commentators have already noted how this could allow for Jewish-based challenges to the state abortion bans that will quickly snap into place. A synagogue in Florida this month sued the state to stop a new anti-abortion law from going into effect in July. The suit is filed on the grounds of religious discrimination.

A number of Orthodox groups and figures argue that liberal Jewish groups overstate the protections Jewish law offers to pregnant women. These groups argue that state laws with exemptions considering the life of the mother are adequate and that abortion under Roe v. Wade was constituted, devalues life.

The statement from Aguda, the umbrella group for haredi Orthodox synagogues and organizations, wholeheartedly endorsed the Roe v. Wade reversal as a celebration of life.

“Agudath Israel of America welcomes this historic development,” a statement said. “We pray that today’s ruling will inspire all Americans to appreciate the moral magnitude of the abortion issue, and to embrace a culture that celebrates life.”

Yet even among the Orthodox, there were differences and a degree of anxiety at what the overturn of Roe v. Wade could bring. Jewish scholars across the religious spectrum agree that mental health should precipitate an exemption to abortion bans, although they disagree about what may constitute a mental health crisis. Not every state includes a mental health exemption for pregnant women seeking an abortion, and at least one, Georgia, explicitly excludes it.

Some Orthodox scholars hold that rape triggers an exemption; a number of states also lack an exemption for rape.

“Jewish law prioritizes the life of the pregnant mother over the life of the fetus such that where the pregnancy critically endangers the physical health or mental health of the mother, an abortion may be authorized, if not mandated, by halacha and should be available to all women irrespective of their economic status,” the Orthodox Union said in its May statement.

Rabbi Moshe Hauer, the Orthodox Union’s executive vice president, said in an interview that states excluding mental health from the abortion calculus, as Georgia does, would be a cause for concern.

“Absolutely, when there will be mental health issues that impact the life of the mother” abortion should be allowed, “and, yes, in that event we would we would be concerned about that,” he said.

But he added that the court’s decision was an opportunity to consider the value of life in a number of spheres.

“You know, there are definitely concerns,” he said. “But there may also be an opportunity here to shift the discussion of life to a more responsible space.”

NCJW was also planning a rally in Washington, D.C., when Congress reconvenes after the summer; their rally in May attracted more than a thousand protesters. Democrats have said they will make the repeal of Roe v. Wade an issue in the midterm elections.

Katz also wants Jewish organizations to set an example by giving women reproductive leave that would accommodate the extended time needed to get an abortion the reversal of Roe. v Wade would trigger. 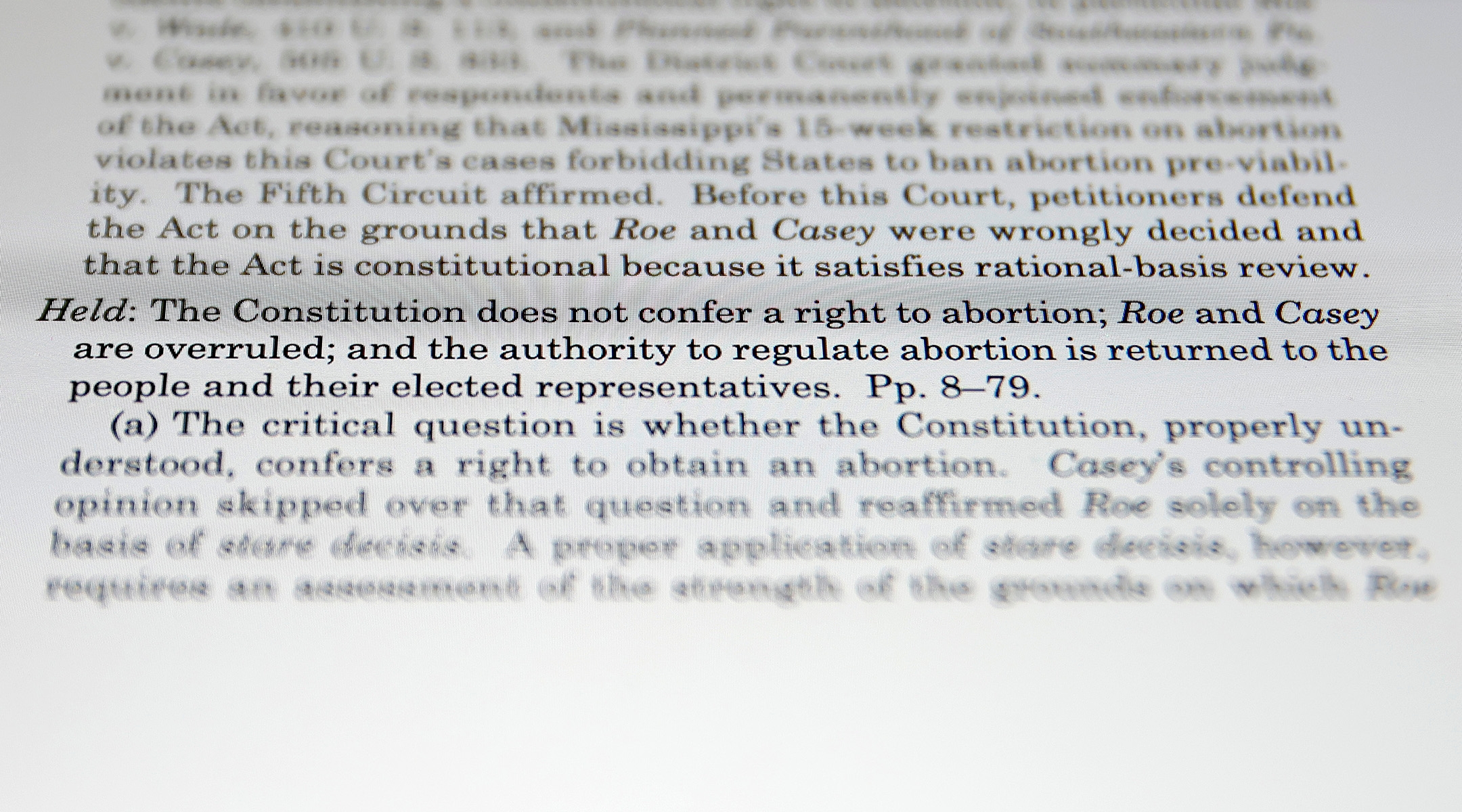 Within a week or so of the leaked decision in May, the NCJW almost immediately entered a partnership with the National Abortion Federation, which raises funds for women who want abortions. That process is set to become more expensive in states with restrictive laws ready to kick in, requiring women seeking abortions to take time off work and pay for travel to where it is permitted.

The funds the NCJW raises for the National Abortion Federation “will help people across state lines, it’ll help fund abortions for people who can’t afford it,” Katz said.

Within minutes of the court decision, the Jewish Community Relations Council of Greater Washington said that it was ready to assist such actions: Maryland, one of the JCRC’s constituent states, has liberal abortion laws and is the closest state to a number of states that do not.

“We will work in coalition to ensure that the state is prepared to welcome and serve the thousands of additional women who will travel to our state to seek medical care and exercise reproductive rights,” the JCRC said in a statement.

The Washington D.C.-area JCRC said it would push back against further restrictions on abortion access in Virginia, and it would lobby to keep Congress, which has a degree of jurisdiction over the District of Columbia, from imposing abortion restrictions on an overwhelmingly liberal population there that rejects such restrictions.

“We will also mobilize our local Jewish community at the grass-roots level, connecting synagogues and individuals to meaningful opportunities to support women seeking abortions in our region,” the D.C. chapter’s statement said.

Such grass-roots initiatives may soon proliferate in Jewish communities. “We are outraged by this decision, which we do not believe represents the will of the people nor is in the best interest of the country,” said the Jewish Council for Public Affairs, the umbrella body for Jewish public policy groups.

Be the first to comment on "‘After Shabbat, we will act’: American Jews gear up for wave of post-Roe activism"