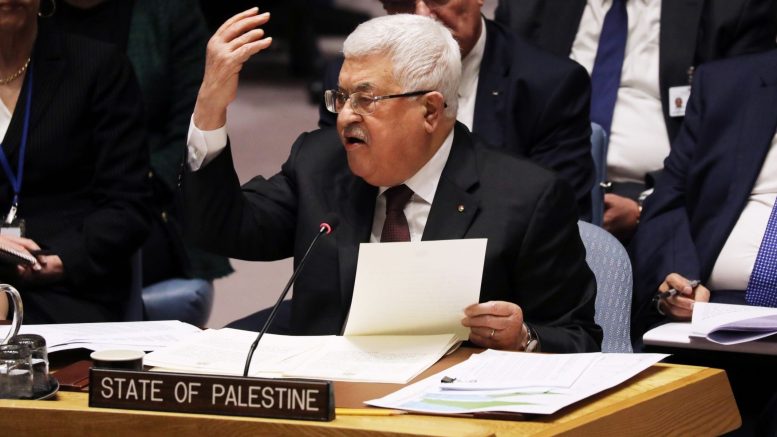 By Ron Kampeas, WASHINGTON (JTA) — Palestinian Authority President Mahmoud Abbas declared an end to all agreements with Israel, including security cooperation, effectively turning over to Israel’s government the running of the entire West Bank.

“The Palestine Liberation Organization and the State of Palestine are absolved, as of today, of all the agreements and understandings with the American and Israeli governments and of all the commitments based on these understandings and agreements, including the security ones,” Abbas said in a speech in Ramallah, which functions as the capital of the Palestinian Authority.

“The Israeli occupation authority, as of today, has to shoulder all responsibilities and obligations in front of the international community as an occupying power over the territory of the occupied state of Palestine, with all its consequences and repercussions,” he said, according to the Wafa news agency.

It’s not clear what steps Abbas will take next. In the past he has threatened to end agreements that he claims Israel has already abrogated before retreating from the threats. The finality of this statement, however, seems to be heralding the collapse of the Palestinian Authority, the last vestige of the Oslo peace talks, as well as the dismantling of security cooperation with Israel, which Israeli security chiefs have said has been critical in keeping the West Bank relatively quiet.

Abbas said Israeli Prime Minister Benjamin Netanyahu’s plans to annex parts of the West Bank left him no choice, and he blamed the Trump administration’s “peace vision” unveiled in January. The plan allows Israel to annex some territory, but in coordination with the Palestinians.

Abbas said the PLO remained committed to the two-state outcome, adding that he planned to seek recognition of statehood in a number of international forums.

The Trump administration and Israel have cautioned the Palestinians against seeking statehood recognition, describing it as a unilateral act — the same term Palestinians use to describe Netanyahu’s annexation plans.

The U.S. has little leverage to use on Abbas, with the administration having cut almost all assistance, except money for security cooperation.

Be the first to comment on "Abbas ends Palestinians’ agreements with Israel, including security cooperation"