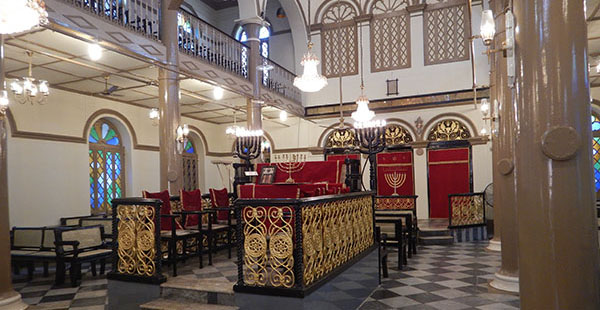 An interior shot of the Musmeah Yeshua Synagogue in Yangon. Photo courtesy of Milt Fischbein.

(AJNews) – A beautiful synagogue amidst mosques and Hindu temples in a city most famous for its shimmering pagodas, Musmeah Yeshua is the most notable reminder of the vibrant Jewish life that once existed in Rangoon, Burma (now Yangon, Myanmar).

Our arrival in Yangon at the tail end of January, 2020 fulfilled a dream.  Our family had lived in Malaysia for a remarkable year in the mid-1990s and travelled extensively there and in Thailand.  Burma then languished under martial law and it would be many years until we could take a boat ride on the Irrawaddy or travel the poetry-inspiring road to Mandalay.

As we packed for the long-anticipated adventure, my husband and I felt anxiety too.   We had routed our flights so as to avoid mainland China.  Canadians Michael Spavor and Michael Kovrig were already victims of Beijing’s rage over the detention of Huawei’s Chief Financial Officer Meng Wanzhou, making our Canadian passports potential liabilities.

Meanwhile, a mysterious virus said to have originated in a wet market in Wuhan, China was spreading, though the devastating COVID-19 pandemic had not yet been declared.

We took a deep breath, packed some face masks and flew through Hong Kong toward a remarkable adventure that began, counterintuitively, in Myanmar’s only remaining Synagogue. 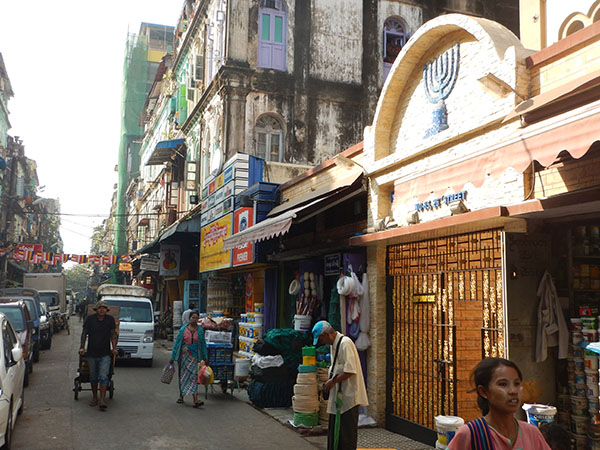 A street shot of the Musmeah Yeshua Synagogue in Yangon. Photo by Milt Fischbein.

While researching for our trip, I had come across a company called Myanmar Shalom.  At first I figured that some enterprising Israeli had found a way to capitalize upon the wanderlust of post-army Israeli youth.

I was mistaken.  Myanmar Shalom is owned by Sammy Samuels, the fourth generation 30-something patriarch of the dwindling Jewish community in Yangon.  A graduate of Yeshiva University in New York, Sammy is keeping the doors of Musmeah Yeshua open, as his late father Moses once did, so that Jewish visitors can be greeted and services held when a minyan materializes.

Arriving in Yangon several days ahead of our four-country tour of Southeast Asia, we took a Myanmar Shalom day tour featuring the Jewish sites of Yangon.

Our guide, Soe Yee, picks us up in front of the Chatrium Royal Lake Hotel wearing his traditional Longyi, an ankle-length sarong that provides blessed ventilation in the smothering heat blanketing Yangon even in the early morning hours.

We drive past the shimmering Shwedagon Pagoda (which we explore in amazement later in our stay) – and head toward the centre of town with its picturesque collection of colonial period buildings established after the British colonized Burma in 1885.

Soe Yee – who is not Jewish – points with pride and respect to the multiculturalism evident in Yangon’s bustling centre.  The street once known as Judah Ezekiel Street is home to a Sikh Temple and a Salvation Army Church.  Similarly, at the town centre, pagodas, temples and mosques co-exist in seeming peace – belying a long history of ethnic strife in Southeast Asia’s largest country, most recently manifested in  the persecution and murder of Rohingya Muslims in Myanmar’s north.

We wade into the Indian Town area, a riot of shops and stalls, to the Musmeah Yeshua Synagogue.  The original 1854 wood building, superseded by a beautiful stone structure in 1896, served the community of Baghdadi Jews that built it as well as Bene Israel and Cochini Jews from India.

Musmeah Yeshua once housed an astonishing collection of 126 Sifrei Torah in a Jewish community that, at its height in 1940, numbered 2,500 in all of Burma.  Today only two Torah scrolls and a handful of descendants of the original Jewish community remain.  Most of the Jewish community fled Rangoon and Burma when the Japanese invaded Burma in 1941, retreating mainly to India with many of the precious scrolls.

Musmeah Yeshua is bright and majestic, with high ceilings and dramatic columns supporting a second story women’s gallery no longer much in use.  The tiny remaining community prefers to congregate on the main level where empty wood and rattan benches are scattered in intimate groupings as if in conversation with one another.  They certainly have some stories to tell!

A photo exhibit near the entrance of the Synagogue captures some of the highlights of Yangon’s history, including glimpses into some of its most prominent Jewish citizens and remarkable guests. 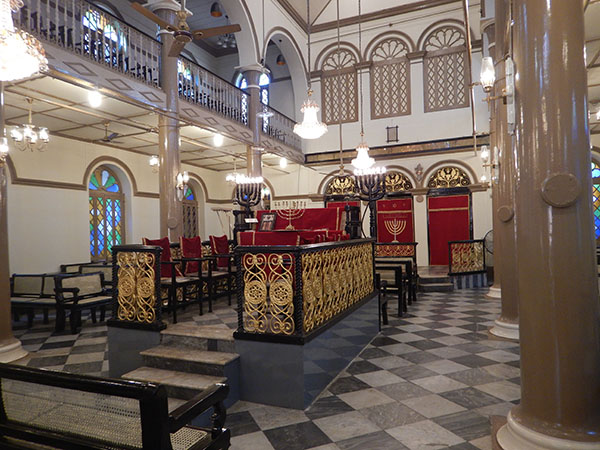 An interior shot of the Musmeah Yeshua Synagogue in Yangon. Photo courtesy of Milt Fischbein.

There, we “meet” the Solomon brothers, who established an ice factory in Rangoon during the early 1900s and, most notably, introduced Coca Cola to Burma.  Soe Yee will later show us the Solomon home – now an elementary school – and the building that once housed their plant, which was nationalized by the Burmese government in the 1960s when most of the remaining community dispersed.

Israel figures prominently in the photos gracing Musmeah Yeshua, telling the story of a close relationship between the two countries based, in large part, on parallel experiences.  Each country was colonized by the British and achieved independence in 1948.  Burma was the first Asian country to recognize Israel and the 1950s and 1960s saw the flourishing of a friendship that led to the establishment of an Israeli legation (later an Embassy) in Rangoon.

Burmese President U Nu made a state visit to Israel in 1955 where he was warmly welcomed. In 1961, David Ben Gurion spent 16 days in Burma – a surprisingly long sojourn for a sitting Prime Minister. Ben Gurion, whose affinity for Buddhism is well documented, sported traditional Burmese garb and spent time in a Buddhist retreat, in study and meditation. One of the loveliest photos in the Synagogue’s display captures Ben Gurion lighting Chanukah candles surrounded by Rangoon’s Jewish children.

Israel and Burma cooperated on many projects, with Israeli experts supporting agricultural projects in Burma.  Many of Israel’s most prominent politicians visited Burma, including President Yitzhak Ben-Zvi, Golda Meir, Moshe Dayan, Shimon Peres and Abba Eban, who is captured in a photograph taken while visiting the Shwedagon Pagoda.

We follow Soe Yee out of the Synagogue and into the thick air of India Town where he points to examples of previous Jewish life in the neighbourhood. Beneath the Cholia Jamah Mosque there was once a chocolate shop owned by a Jewish family, another business nationalized in the 1960s.

We stroll past the Sule Pagoda to the Mahabandoola Garden where we gaze at City Hall, an extraordinary fusion of Colonial and Burmese architecture, built in 1925.  We are standing where massive protests took place in 1988, following yet another military coup and the house arrest of pro-Democracy leader Aung San Suu Kyi.

A short walk away, on Pansodan Road, we explore the Sofaer Building (now known as the Lokanat building), a four-story Italianate building designed by renowned architect Thomas Swales and built by Isaac Sofaer in 1906.  The Sofaer family, prominent Baghdadi Jews, had amassed their fortune importing wines and spirits, exporting rice and supplying oilmen.

David Sofaer served as Yangon’s mayor in the 1930s.  Abraham Sofaer eventually made his way from Burma to England and then Hollywood, building a career as a stage and screen actor.

It would be an understatement to say that the Sofaer building – which once housed such tenants as the Bank of Burma, Reuters and the Vienna Cafe – has seen better days.  While some of the street-level spaces have been reclaimed and renovated, a cautious trip upstairs brings us to the rusting cage of a mangled elevator and the depressing view of a courtyard filled with garbage.  Still, the former glory of the building remains evident in its spectacular yellow façade and original floor tiles imported from England.

Just a short stroll away, we make our way to the Secretariat – the massive former headquarters of British Burma and the site of Aung San’s assassination in 1947.

On the East side of the Secretariat runs Thein Phyu Road, formerly known as Judah Ezekiel Street –  named for the early Jewish immigrant to Burma who, together with his brother, arrived in the mid-1800s.  They worked for King Mindon – the penultimate King of Burma – as bookkeepers.  A Moldavian Jew, Jonas Goldenberg, who made his fortune in logging, was also close to King Mindon’s court.  A century earlier, the first recorded Jew in Burma was Solomon Gabirol, from India, who served in the army of King Alaugpaya. 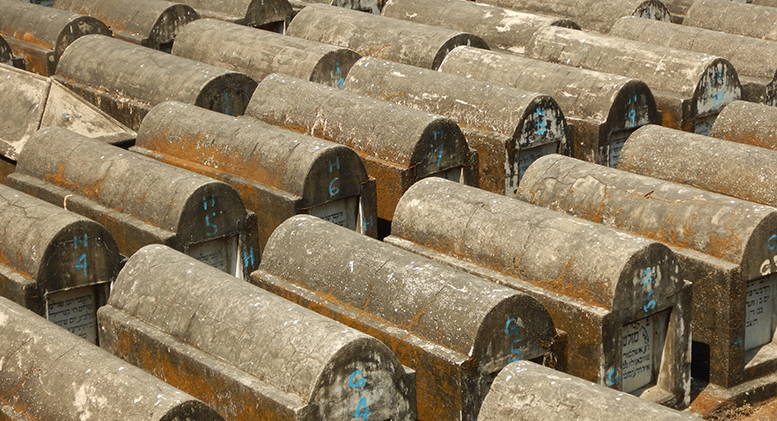 After exploring other Yangon sites including the colonial-era Post office, Custom House and storied Strand Hotel, Soe Yee takes us to the old Jewish cemetery, some six miles away.  The cemetery – located in the midst of a very poor neighbourhood – has more than 600 graves.

Those laid to rest once enjoyed a vibrant Jewish life in Rangoon that included two Synagogues.  The second, Beth El, established in 1932, disappeared with the exodus of Jews from Burma during World War II.  The last Rabbi to serve the Yangon Jewish community left in 1969. A Jewish school established in 1910 behind the famous Scott Market is said to have educated 200 Jewish children at its height.  With the exception of Musmeah Yeshua, these institutions were laid to their eternal rest many years ago.

The condition of the cemetery – from the crumbling of matzevot to the overgrowth of weeds— is dismal and its future uncertain given government plans for urban renewal.

According to Sammy Samuels, a new cemetery has opened in recent years, about an hour and a half’s drive away.  That is where Moses Samuels is buried – ironically at a distance from the deeply-rooted community he worked so hard to hold together.

Like his father, grandfather and great-grandfather before him, Sammy labours to keep the light of Judaism shining in Yangon where a once prosperous community contributed disproportionately to civic life and philanthropy.  In a country of 54,000,000, with a remaining Jewish community of 20 (swelling to 70 or 80 if you count the pre-COVID community of Jewish expats), the effort seems in need of a miracle. 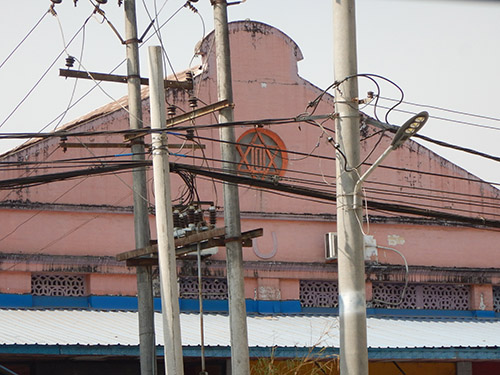 Yet, in a city full of spectacular religious and secular sites, the Musmeah Yeshua Synagogue holds the #3 spot on Trip Advisor’s 149 things to do in Yangon.

Jewish travellers, finding invitations posted at their hotels, have found their way there for Passover Seders and, since 2011, Sammy Samuels – whose Bar Mitzvah and wedding were the last to be held there – has invited some 200 travellers, government officials and representatives of other religions and ethnicities to join his tiny community in lighting the menorah and celebrating the miracle of Chanukah.

Sadly, Yangon is in need of miracles.  A second wave of COVID-19 has hit hard.  The Synagogue, like other religious and tourist sites, has been forced to close its doors until the contagion subsides. It is the least of Yangon’s challenges. Reuters recently reported that some citizens, their livelihoods decimated due to the pandemic, are trapping snakes and rats as food sources.

“We need to be resilient and hope for the post-COVID bounce in tourism,” Sammy Samuels says.

Last February, during better times, we took our reluctant leave of Yangon, moving on to adventures elsewhere in Myanmar and beyond.  We soared in a hot air balloon above thousands of ancient pagodas in Bagan, Myanmar and marvelled at the breathtaking ruins of Angkor Wat in Cambodia.  Every bit as wondrous as those ancient sites is the small but mighty remnant that fans the flickering flame of Judaism in the land of pagodas.