Israeli Consul General DJ Schneeweiss was in Edmonton on November 3 giving an open and interactive presentation on the current situation in Israel. Photo by EJNews

(EJNews) – Israel’s Consul General to Toronto and Western Canada made a rare visit to Edmonton on November 3, 2015 for a frank and respectful discussion about the current situation in Israel. He also spoke about the impact the recent spate of violence is having there and in Jewish communities across the Diaspora.  The event was sponsored by the Jewish Federation of Edmonton.

Consul General DJ Schneeweiss acknowledged that violence perpetrated by young Palestinians has escalated on the streets of Israel in the past few months but he emphasized that the recent violence does not tell the whole story of the current situation in Israel. There are also many exciting and positive things happening including wonderful innovations in culture, medicine, research and technology. 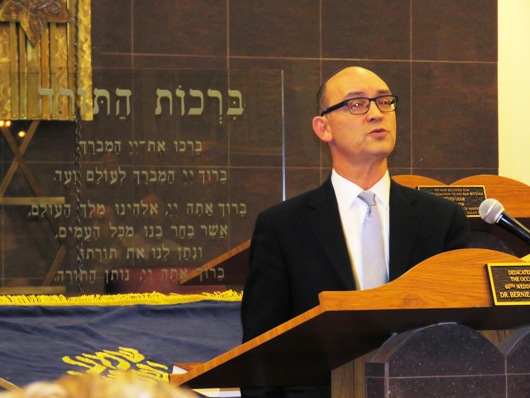 Over 175 people gathered at Beth Israel Synagogue to hear first hand from the Consul General. He told the crowd that he could not sugar coat the situation. He said, “In the short term, this violence may continue for a while but no matter what, Israel will learn to cope with it. If the Palestinians think they are going to get rid of Israel by stabbing one Jew at a time they are very wrong.”

The Israel Defense Forces are the best in the world, he added. “There is no doubt that the IDF is able to defend our country.”

Schneeweiss said that many are painting the Palestinians as the victims here but the truth is they are the authors of their own story and their own destiny. He cited many examples over the years of the Palestinian leaders refusing to accept sincere offers of peace.

“Too many are willing to brush Palestinian choice out of the story,” he added, it really is about the “volition of Palestinian leaders.”

The bottom line, he explained is what Palestinians are teaching their kids, what they are encouraging their kids to do.  The Palestinian government needs to take a stand against the violence.

“Without a doubt,” he said, “the moment the Palestinian leadership says they are willing to negotiate with us and accept us, the moment there is a credible move away from violence and they say that Israel has a right to be there – it will make a huge difference.”

About those who think Israel should trade land for peace, the Consul General said that there is no climate for peace right now. He said, “At this time, Israel giving back territory would be suicide.  First they have to accept that they will be living side by side with us.”

“It’s been 20 years since the Oslo talks and since Yitzhak Rabin,” he asserted. “At the moment there is no quick move back to the peace that we’d like to achieve.”

Israel will do what is must to defend herself, he said, but the Palestinians are “living the consequences of their own education of their children. This violence is being tolerated but not controlled by the Palestinian leadership. 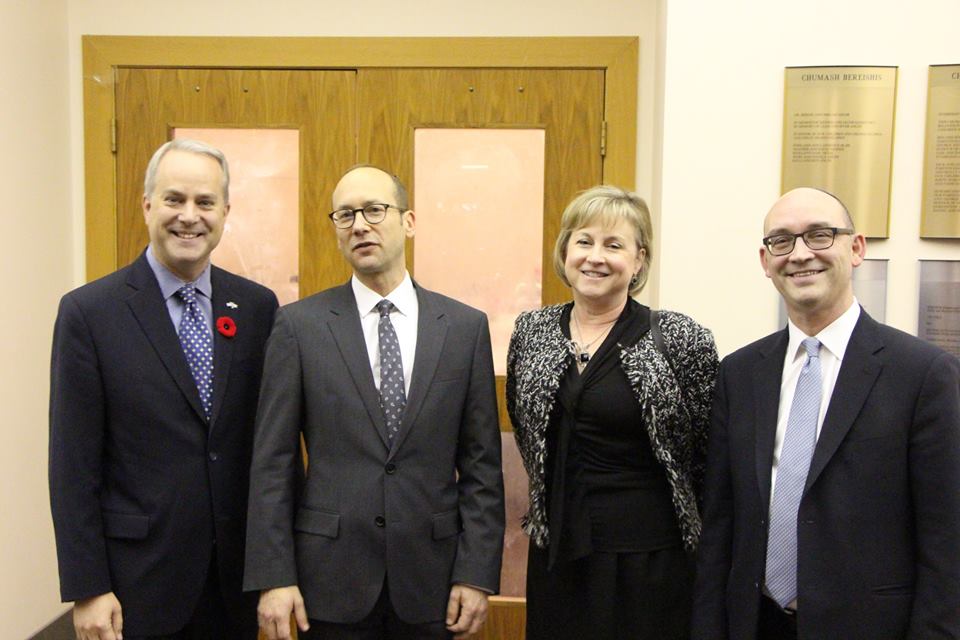 “It is not spontaneous in that it’s been engineered over time.”

The Consul General said that he believes that the interest of the average Palestinian is to have a better life and he hoped the leadership would fall in line. “If and when we find a partner in the Palestinian leadership, we will cut the deals for peace,” he concluded.

Meanwhile he said that Israel is working hard to improve her connections and relationships with the rest of the world.

“Of course we want to see Israel secure but if we only talk about the conflict we’re doomed,” he explained. “Israel has so much to offer the world and is making great strides in many exciting areas including culture, tourism, high tech, medical research and other innovations.

“We are reaching out to others and building relationships in all arenas and we will keep working at it.”

Schneeweiss said that the story of Canada and Israel is already a huge success and he believes it will continue to become more rich and more multi-faceted, in part because of shared values.  “There is absolutely no reason that it won’t continue to grow and flourish,” he added.

There is room for more trade between Canada and Israel, he noted. “We just renewed a free trade agreement and a science and research & development deal with the BC government as well as a deal with Ontario.”

Partnerships will undoubtedly be continuing in Alberta too, as soon as the new provincial government is settled in.

About the new federal government in Canada, the Consul General was optimistic. He said, “We understand the democratic process well. We are grateful for the gold standard set by the previous Canadian government and look forward to continue working with new government.”

Each of us can help Israel to improve her profile in the world, advised Schneeweiss.  Concerned citizens should arm themselves with as much real knowledge as possible – from credible sources such as the Israel Foreign Ministry, and various Israeli media sources.  He said that up to date information about Israel is available at the click of your computer keys. You can control which bits of news you get. The key then is to engage in the political process – not just by voting on election day – but by telling your MP what you think and what you’d like them to do.  Also when you see questionable coverage in the mainstream media – question it. Write them and let them know what you think.

He says we should tell our friends, neighbours and colleagues about everything that Israel has to offer. Encourage individuals as well as organizations to visit Israel.  “More and more people and delegations are coming to Israel,” he said.  “As soon as they get there, they really see it and they become ambassadors of goodwill for Israel.”

Israel is still a work in progress, stressed the Consul General. “It is a real living breathing project of the Jewish people.  It gets side tracked by the needs for defense etc but that is not the real story.  Israel is a start up nation and it has a focus of caring for others and tikkun olam (repair the world). It is not one or the other – it is both. Our message to the world is that we are relevant to you and if we partner together we can do great things. We are all partners in this project.  If people don’t agree with one policy or another, that is ok. The more people that care enough to talk and discuss, to agree or to argue, the better.  The goal is to engage and keep on engaging.”

Someone from the crowd asked the Consul General about the conflict with Palestinians – When is enough, enough?

He answered quite simply, “There is no enough. We aren’t going anywhere; we are here to stay.”