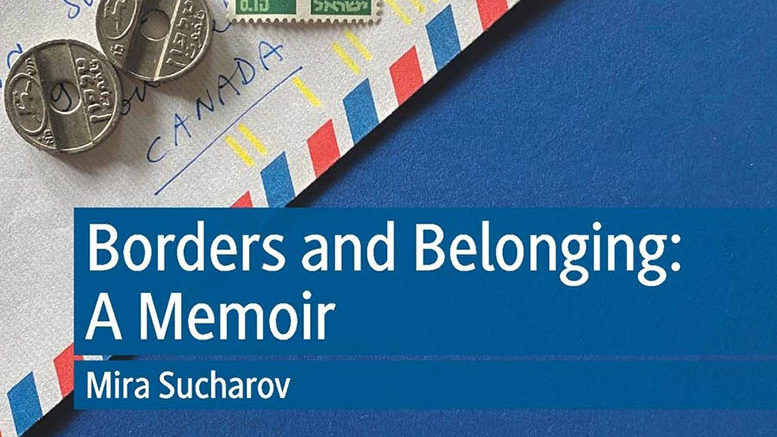 (AJNews) – Carleton University political scientist and specialist in the Israeli-Palestinian conflict Mira Sucharov has released a new book, Borders and Belonging: A Memoir. AJNews spoke to Sucharov about the intersection of her personal and political journey from her childhood in Winnipeg to Jewish summer camp and a three-year sojourn in Israel. This interview has been condensed for length and clarity.

JA: How did you decide the time was right to write your memoir?

MS: Several years ago, I developed a course at Carleton on graphic novels and graphic memoirs to teach political science. I love the form and intimacy it creates between author and reader.

My first idea was actually to write a graphic memoir, but for that I needed an artist and it proved to be quite challenging to secure one. I decided eventually to switch to the genre I can do best, which is prose writing without the drawing, because I’m not a visual artist. I read many, many memoirs and trained with a couple of memoir experts – Shulem Deen, who’s written an amazing memoir about his journey away from ultra-Orthodoxy, and Canadian Alison Pick, who’s written an excellent memoir on her journey through embracing her Jewish heritage. And I went for it.

JA: The book details your journey from a liberal Zionist perspective to one that’s more critical. Would you characterize yourself as post-Zionist?

MS: That could be an accurate way of defining it, if we can all agree on what Zionism means. In my case, it’s really about concern over equality and justice in Israel and Palestine and to what extent a Jewish state can grant all its inhabitants the rights that they deserve under current international law and norms.

What I’m doing in this book – politically speaking – is figuring out how to square a sense of deep attachment to the country with a political vision that has room for more justice and equality than conventional Zionism has, in my view.

We know that Israel exists, we know that Hebrew has been revived and that Israeli culture is extremely vibrant. How can we take those Zionist achievements and add rights and equality to a greater extent than they exist right now?

But the book is not a political treatise. It’s my particular political journey, and from that readers can reflect on their own politics. That’s the gift of the memoir genre – it enables readers to relate even if they don’t agree.

JA: Was there a particular moment when you realized when your worldview had changed?

MS: Probably around 2015, in the aftermath of those particular Israeli elections –  there have been so many in the past few years. There was a sense that the two-state solution isn’t working and that Palestinian rights need to be taken more seriously than they have been. In the book, I trace experiences, situations and reflections that are leading me there. But, as with many things, it’s not a sudden shift.

I bring up past experiences and conversations I’d had many years ago, or past notions I’d had, such as when I was living on a kibbutz in my 20s and I noticed that they called the fields where they work by their Arabic name, Fallujah. I absorbed that fact, but I didn’t pry. Years later, I end up delving into that. Sometimes these moments that seem critical then enable you to reflect more deeply on past events and see them in a new light.

JA: One of those anecdotes that stand out to me was when the vice president of Carleton reached out to you to solicit your insight on a controversial Israel Apartheid Week poster in 2008, an image you told him you thought was unfair in its depiction of the Israeli military. How would you have handled that exchange differently today?

MS: I was taking the poster perhaps more literally than I would now. The poster, that Carleton ultimately forced the removal of, was a cartoon that showed an Israeli Apache helicopter aiming a missile directly at a young Palestinian boy. I said I thought it was unfair that the poster showed Israeli forces deliberately targeting children.

If I were asked about this now, I would say that the poster is capturing an important idea of the pain and suffering of living under occupation, and an important fact of the asymmetrical casualties in the Gaza War. There’s an important political value in that kind of poster. I still have some ambivalence, but now I would probably not want to stand in the way of protest like that.

JA: In the book, you talk about coming to terms with trauma from your parents’ divorce. In what ways did this trauma impact your worldview?

MS: There was a sense of needing to pull the pieces together and find harmony. I think I had a real sense as a child of the family rupture and in a sense being pulled in multiple directions. Not that my parents deliberately did that. They never – thank goodness – spoke ill of each other in front of me. But there was an unconscious, implicit sense that I was being pulled in multiple directions.

I think that led me to be drawn towards conflict resolution as a field and then to adopt a certain liberal Zionist view of Israel-Palestine for many years, until such time as the events I describe in the book start chipping away at the more pragmatic view and push me more towards endorsing rights, justice and equality in a way that I hadn’t before to the same degree.

My personal circumstances perhaps give rise to a political outlook. Coming to terms and challenging myself on that outlook and shifting it a little bit then enables me perhaps to go back to my earliest personal trauma and no longer feel like I’m that child in a state of constantly being pulled.

JA: What would you like readers to take away from the book?

MS: My goal in this book is to move readers, and give them an emotional and intellectual experience. I want them to relate even if they don’t agree. I want it to provoke discussion about the role of people’s personal lives and political lives, and how the two are intertwined. And I would like it to promote more discussion about the Jewish relationship to Israel-Palestine, how we do engage and how we can engage.