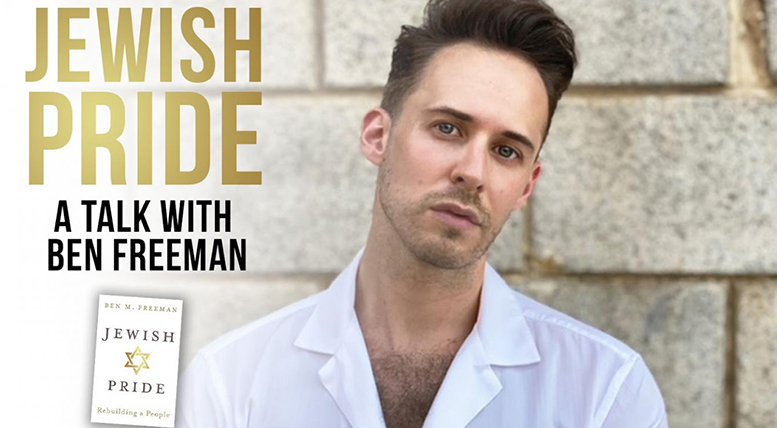 Freeman brings a unique perspective on Jewish pride, having cut his teeth in the LGBTQ+ community as he came to terms with his own identity as a proud gay man. Unapologetic in his support for Zionism, Freeman – who will celebrate his 35th birthday on the day he speaks to Albertans – devotes his life to engaging Jews and non-Jews in thoughtful discussions about Judaism, Israel and Holocaust awareness.

“It’s been a kind of a wild ride,” Freeman told AJNews, describing a packed personal schedule that includes his full time job heading up the humanities program at the Harbour School in Hong Kong; multiple international speaking engagements; diversity, equity and inclusion training for high profile organizations including Facebook; and consultation and content creation for clients like the Jim Henson Company, of Muppets fame.

Meanwhile, Freeman is completing another book, the second in his planned trilogy, which is slated for publication in October 2022.

A Glaswegian with the charming Scottish brogue to prove it, Freeman previously worked for the United Jewish Israel Appeal in Glasgow and the Holocaust Education Centre in Hong Kong, where he led education programs for teachers and students and organized events for the Jewish community.

It was fitting that Freeman spoke to AJNews during the first day of Chanukah, a holiday that celebrates the power of light over darkness.

“[Chanukah] has become prominent because it speaks to our experience having to fight, having to be modern-day Maccabees, having to stand up and reclaim Jewish identity and . . . stave off the pressures of assimilation from the non-Jewish world,” Freeman said.

“What an incredible expression of Jewish pride that we put [the Chanukiyah] this everlasting symbol of Judaism and Jewishness in our windows for the world to see,” Freeman said.

Freeman is on a mission to improve Holocaust education and inculcate Jewish pride through historical contextualization and reclamation of Jewish traditions, customs and narratives in all their glorious diversity.

“I believe that the Holocaust is a solely Jewish experience,” Freeman told AJNews.

“I believe that the Holocaust is solely a Jewish experience. While it happened simultaneously to other crimes against humanity…it is important not to universalize [our] story to the extent that it becomes everyone’s story.”

“There are universal lessons from every experience, but we have to honour the specificity. [Jew hate] was a policy that was central to Nazi ideology. It was an essential component of their ideology, and it was almost more important than the war effort,” Freeman said.

“The story of Jew hate did not begin with the Shoah.  It began two thousand years previously and it is still being written today,” Freeman added.

While he resists fearmongering, Freeman is direct in his message.

“I think it would be enormously naive for Jews not to think that it could happen again. There’s a continuous thread of Jew hate running through our entire history.

While Freeman notes a rise in antisemitism in North America and around the world, he maintains that it is not a Jewish problem.

“It obviously impacts us and shapes our experience, but it’s not our problem; it’s a problem of the non-Jewish worlds in which we live.”

Freeman rues the unfortunate reflex that causes many Jews to hunker down and avoid attracting attention when feeling under siege.

“Jewish people are often told ‘Sit down, keep your head down, don’t say anything, your struggles are not as important, now is not the time.’  Well now is the time.”

One impediment is “internalized antisemitism” that, in its extreme, leads some Jews to embrace anti-Zionism, Freeman says. Even more insidious, he adds, is a growing tendency for some Jews who remain proudly Jewish and Zionist to say “I’m Jewish, but. . .” or “I’m Zionist, but . . .” before distancing themselves from other Jews in order to fit into societies that are, according to Freeman, “ideologically hostile to us.”

While proud of the international impact his first book is making, Freeman is quick to share the credit.

“You know it’s really a testament to my parents, to the community in which I grew up, Freeman told AJNews.

Like his friend and fellow Glaswegian Eve Barlow – another rising Jewish pride advocate – Freeman knows what it is like to navigate communities in which he is part of a small minority.

“It trained us. We were a very small [Jewish] community, in a very small country….a country where we were a tiny minority,” Freeman said. “Being LGBTQ+ Jews you learn how to navigate, and that’s where my writing on pride came from.”

“I don’t think a heterosexual Jew could have written this book,” Freeman added, referring to the intersectionality in his own life that has made him particularly adept at harmonizing dual identities.

“We may live our lives slightly differently, but actually we are not so different after all. I think that brings us all closer.”

Freeman urges Jews to embrace one another regardless of personal politics and differences in the way they observe their Judaism.

“The Jewish community is bigger than us,” says Freeman. “It’s something that doesn’t belong to us. We are caretakers of it and we are nurturing it, maintaining it and, hopefully improving it for next generations.”

Freeman even urges compassion for those co-religionists – often the more traditional among us – who are not LGBTQ+ friendly.

“There are many Orthodox Jews who are fully supportive,” Freeman is quick to add, adding that one mustn’t paint all religiously-observant Jews with the same brush.

He points out that the Orthodox – often more easily identifiable as Jews – are most vulnerable to anti-Jewish attacks.

“When Jews are being attacked, that’s the priority,” Freeman said.

Freeman’s January 27 talk is expected to attract a large audience beyond the Jewish community.

“My work with regards to non-Jewish people is about, of course, helping them to think about their own identities but, primarily, it’s about empowering them through knowledge, giving them space to learn in a non-judgemental way,” said Freeman.

“Jew hate is baked into society, so of course people are socialized into these ideas….Hopefully non-Jewish people who attend this event will be learning about the Jewish experience, will understand Jewish people better, and feel empowered, educated and inspired to become active allies to the Jewish people.”

Freeman points out that intolerance is not always born of hate. Sometimes the culprit is a lack of knowledge. That is one reason he endeavours to educate both Jews and non-Jews about history and the diversity of Jewish experience.

Holocaust education and commemoration is important on multiple levels according to Freeman.

“The entire world conspired by action or inaction to annihilate six million Jewish people. This was not just a European experience. The Americans were refusing refugees, the British, the Canadians, the Australians.”

“We are living in a post-Holocaust world and that has impacted how we see our Jewish identity, how we see our interactions with the non-Jewish world…even in ways that we’re not aware.”

But Freeman cautions against allowing Holocaust remembrance and the fight against antisemitism to become the sum total of our Jewish identities.

“Our ancient contemporaries were the Babylonians, the Romans, the Assyrians, the Greeks….None of them exist anymore, or if they do, they exist in states of greatly diminished power.”

“So it’s about celebrating the beauty and the resilience and the survival and the commitment to Jewish life as well as remembering what was done to us, what was stolen from us.”

Freeman says that the organized Jewish community has sometimes missed the mark in terms of Jewish education, particularly as it relates to the Holocaust, but he urges empathy, pointing out that it took time for educators and community leaders to cope with their own post-Shoah trauma.

He adds that more work needs to be done to correctly contextualize Zionism too.

“Why don’t we know that we are indigenous?  [When] we talk about Israel being our homeland, we have to use specific words that people understand that also relate to our experience.”

Freeman said, “That is where we as a people emerged and…developed our ancient culture and civilization for 2,000 years.”

Freeman says that being Jewish is “cool,” but he adds that our community finds itself in “a moment of reckoning.”

“Our community, our organizations need to be really considering where we’re putting our resources, which voices we’re uplifting, and how we create and spread Jewish pride as a movement which is multigenerational and sustainable…we can’t drop the ball.”

“We will define ourselves,” Freeman says, inviting us to take inspiration from those who came before us, including the Jews who defined themselves and bravely practiced their Judaism, even in the midst of the Shoah.

“The lambs-to-the-slaughter narrative is false,” Freeman said. “Jews in every single place stood up and they defended themselves, if not physically then spiritually. They lit chanukiyot. Some even fasted in Auschwitz. They got married. There is a continuous, unending Jewish commitment to Jewish life and that alone is inspiring enough.”

The conversation with Ben M. Freeman begins at 7 pm on Thursday, January 27. It will be moderated by Jared Shore, co-president of Calgary Jewish Federation, and Edmontonian Jordyn Wright, an emerging young leader who is currently studying at McGill University.

To register, go to bit.ly/HistoryJewHate

Be the first to comment on "A conversation with author, educator Ben M. Freeman: January 27, 2022"