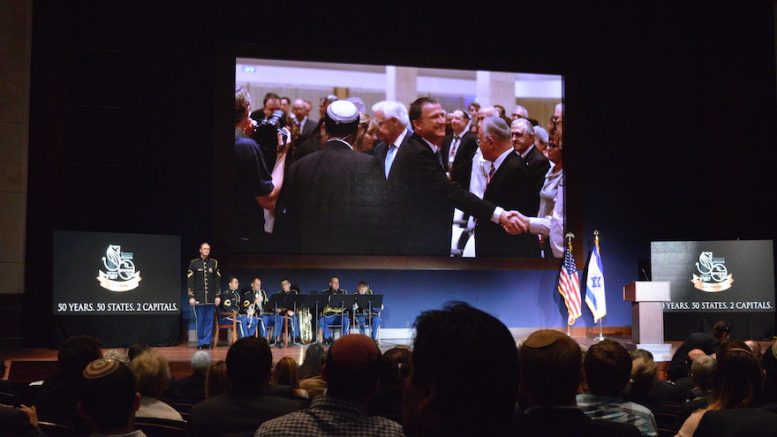 The 50th Anniversary of the Reunification of Jerusalem was celebrated on June 7, 2017 - simultaneously at the Knesset in Jerusalem and at the US Capitol.

WASHINGTON (JTA) — The speaker of the U.S. House of Representatives, together with the speaker of Israel’s parliament, the Knesset, joined Israeli Prime Minister Benjamin Netanyahu for a simultaneous celebration of the 50th anniversary of the reunification of Jerusalem.

The event, held Wednesday June 7, 2017, was organized by Israeli Ambassador to the U.S. Ron Dermer, and included speeches delivered at the U.S. Capitol and at the Knesset, in Jerusalem, each broadcasting a live stream of the other. There were also feeds from celebrations organized for the occasion by Jewish communities in all 50 U.S. states.

Israel captured eastern Jerusalem and the West Bank from Jordan during the Six-Day War of 1967, when it faced down three armies from neighboring Arab nations.

The U.S. Congress has recognized Jerusalem as Israel’s capital since 1995, but no U.S. president since then has done so. President Donald Trump promised during his campaign to extend recognition but, since taking office has delayed doing so.

Both Israelis and Palestinians claim Jerusalem as their capital city.

U.S. House Speaker Rep. Paul Ryan, R-Wis., reflected on his personal experience visiting Jerusalem’s holy sites, and lauded the bravery of Israeli troops who captured the eastern part of the city during the Six-Day War of 1967.

“After thousands of years in exile, the Jewish people are finally back home… home in their eternal, united capital of Jerusalem, never to be divided again,” he said.

Addressing American supporters of Israel, Netanyahu, speaking from the Knesset, said: “We know that you understand that the story of Israel, in many ways, the rebirth of Israel and our return to this land and to this city … is a parable for all humanity. Because if the Jews can overcome the worst travails in history, that means there is hope for all humanity.”

An American military band opened the event at the Capitol with the Star Spangled Banner and closed with “Jerusalem of Gold,” a Hebrew song, whose final verse was written following the city’s reunification. Sheldon Adelson, the casino magnate who is a major backer of pro-Israel and Republican party causes, sat with Ryan and Dermer at the Washington event. Also present at the Capitol was Ofer Shelah, a Knesset member with the centrist Yesh Atid party, who noted his personal connection to the events of 1967.

“My son now is a paratrooper, a member of the same brigade that freed Jerusalem,” Shelah said. “As many Israelis of my generation do I have deep ties to that period. Every Jew in the world has deep ties to Jerusalem.”

Be the first to comment on "50th anniversary of Jerusalem reunification celebrated at Capitol, Knesset"