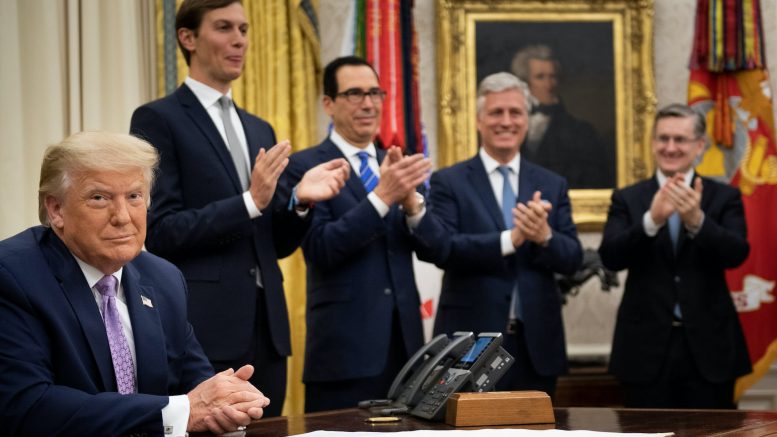 (JTA) — The treaty between Israel and the United Arab Emirates is a big deal.

The agreement, announced Thursday August 13, 2020 in a joint statement from the White House and called the Abraham Accord, means that Israel will now have diplomatic and economic relations with a country that had not recognized it. In return for recognition and relations, Israel has pledged to suspend its ambitions to annex parts of the West Bank.

The UAE is a Muslim kingdom in the Persian Gulf made up of seven smaller entities, called emirates, with huge oil and natural gas reserves. Its metropolis, Dubai, is a wealthy city known as a commercial center for the region. The country borders Saudi Arabia and is only dozens of miles across the water from Iran. It has a tiny Jewish community.

It becomes only the third Arab nation to establish official ties with the Jewish state. In addition to trade, tourism and other exchanges, the treaty means the two countries can collaborate on treatment for the coronavirus and countering the influence of Iran, a shared nemesis.

That makes Iran a likely loser in this deal. The dealmakers are, of course, likely winners.

Here’s our analysis of who stands to benefit from this historic accord — and who has been dealt a surprise setback.

Throughout its 72-year history, Israel has been at war with, or largely ignored by, most or all of its neighbors. The nation has fought four major wars with coalitions of Arab states that pledged and failed to destroy it. Until this week, Israel had diplomatic relations with only two Arab countries, Egypt and Jordan. The rest of the region, at least officially, continued not to recognize the Jewish state.

That changes now. Israel and Israelis can now openly trade with, meet with and travel to a third Arab country. Another Arab embassy will open in Israel, and an Israeli flag will fly in that country. This also may open the door for other countries to follow suit.

Yes, the accord merely formalizes unofficial contacts between the two countries for years. It doesn’t meaningfully change the contours of the Israeli-Palestinian conflict. And like every diplomatic deal, this one has many critics who say it carries risks and drawbacks for Israel and its future.

But the hope for peace in the Middle East is written into Israel’s founding documents. Israel and an Arab nation have taken another step in that direction.

Israel’s prime minister has long argued that Israel can and should pursue diplomatic relations across the Middle East and the globe without making concessions to the Palestinians or withdrawing from territory.

For years, Israel’s allies and neighbors told him otherwise: that to make peace with the broader Middle East, first he needed to reach an agreement on the future of the West Bank. The promise of relations with the wider Arab world was seen as a bargaining chip in Israeli-Palestinian talks.

This accord proves them wrong. The one big promise Netanyahu made was to temporarily suspend plans to annex parts of the West Bank. In past diplomatic accords, Israel has withdrawn from territory in exchange for peace.

The vow isn’t exactly a drastic change of plans for the longtime leader, as he had already pushed off annexation due to squeamishness from the Trump administration regarding the move.

Netanyahu also gets a boost domestically. He has boasted that his experience and global relationships put him in “another league” diplomatically. Now he enters an exclusive pantheon of Israeli leaders who have signed a treaty with an Arab state, joining the ranks of the admired Menachem Begin and Yitzhak Rabin.

Finally, it’s another way that Netanyahu can distract from his ongoing criminal trial for corruption and from the nightly street protests against him and his government’s coronavirus policies.

As far back as the 1990s, the UAE has sought relations with Israel, and Israel and the UAE have shared military intelligence for decades. According to an extensive 2018 account in the New Yorker, the country appreciated Israeli defense technology and has seen a shared threat in Iran, which the UAE and other Gulf states oppose in part due to the Muslim Sunni-Shia divide. In January, the Emirati foreign minister published an op-ed in an Israeli paper, a major symbolic step, and in June an Emirati plane carrying aid for Palestinians landed in Israel.

The deal promises both symbolic and tangible benefits for the UAE, positioning the country as a diplomatic leader in the region. If others follow suit in establishing formal relations with Israel, the UAE can say it was the catalyst. More immediately, it could mean an influx of Israeli tourists and money, as well as collaboration on medical and other research with a regional economic power as both countries fight the pandemic.

Since his first presidential campaign, Trump has promised to deliver a peace deal for Israel, and has expended effort into reaching an Israeli-Palestinian accord, to no avail. Although this isn’t the deal he initially wanted, now he can legitimately claim credit for helping achieve a historic Israeli treaty.

In Trumpspeak, this is a clear win. And it’s a boon for Jared Kushner, a top adviser and his son-in-law, who has succeeded here after failing to secure an Israeli-Palestinian peace deal and drawing criticism for his management of the coronavirus response.

It’s also helpful for Trump in an election year. In a campaign where Israel has come up repeatedly, Trump can position himself not just as a staunch ally of the Netanyahu government, but as a regional peacemaker. It’s not likely to shift votes, though. Trump voters already see him as pro-Israel and probably haven’t changed their minds, while those who oppose the incumbent generally dislike him on issues that range far from the Middle East.

Liberal Zionism is built on the idea that solving the Israeli-Palestinian conflict is Israel’s most pressing diplomatic concern. This accord does not do that.

Yet liberal Zionist groups are celebrating the agreement. After all, their long-term goal is an Israel at peace with its neighbors. This isn’t how they thought they would get there, but a treaty is still a treaty. J Street, the largest liberal Zionist organization, said in a statement that the pact is “just the latest evidence that dialogue and diplomacy, rather than unilateral action and belligerence, are the route to long-term security.”

The suspension of annexation is also at least a temporary win for liberal Zionists, who have been bemoaning that such a move would mean the end of efforts toward a Palestinian state alongside Israel. For them, this is a temporary reprieve from that threat.

Still, the accord is a major blow to the idea that solving the Israeli-Palestinian conflict is Israel’s most pressing diplomatic concern. Liberal Zionists have warned that without sacrifices on the Palestinian issue, peace with other Arab countries is impossible.

Liberal Zionists have said, too, that continued West Bank occupation harms U.S.-Israel relations. The UAE deal is a major blow to that idea. Occupation wasn’t an obstacle for the Trump administration, and apparently it’s not for the UAE, either.

Liberal Zionists have protested for more than a decade against Netanyahu and his policies. This is a major win for a man they desperately want to see lose.

The suspension of West Bank annexation isn’t a sure thing, either. Hours after the treaty was announced, Netanyahu said he still hasn’t given up on annexing parts of the West Bank. So the one concession Netanyahu appeared to have made on their issue might not even last.

However tough of a pill this is to swallow for the Zionist left, it’s even more bitter for the Palestinians. Not only do they see their enemy sign another diplomatic accord without promising them anything, they also feel “sold out” by a country that was supposed to have their back, in the words of veteran Palestinian diplomat Hanan Ashrawi.

For decades, Arab countries united around the idea that Palestine must be liberated and Israel was not to be tolerated. Decades ago, as Israel continually proved its staying power and made strides toward peace with the Palestinians, Arab states began seeking an accommodation with the Jewish state — as long as the Palestinian issue was solved.

The 2002 Arab Peace Initiative said that normalization with the Arab world would come only after Israel ended its occupation. Besides Egypt and Jordan, no Arab country bit at the offer of peace with Israel.

Now that has shifted. An Arab country has normalized ties with Israel without any concession on the Palestinian issue. More may follow.

Palestinians face the prospect of watching their allies make peace with their enemy without gaining anything along the way and with the eyes of the world focused elsewhere.

For a few moments over the course of 2019 and 2020, as Israelis voted in election after election, it appeared that Netanyahu, after a decade as prime minister, could be replaced by a center-left coalition.

That didn’t happen. But rising public anger over Netanyahu’s handling of the coronavirus crisis, as well as the criminal indictments he’s facing, have led to tens of thousands of Israelis taking to the streets to protest him. Were he to call another election due to domestic concerns, polls showed his chances of staying in power were tenuous.

Now he could take the podium in triumph, announcing an achievement more often dreamed of on the left: a treaty with an Arab nation. If another election is afoot, he now has something positive to campaign on.

Loser: The settlers (or at least some of them) and their American supporters

Israel’s annexation plan was never overwhelmingly popular among Israeli West Bank settlers because many of them feared that it would bring along the establishment of a Palestinian state in the rest of the territory, albeit a fragmented one.

Still, for the past few months, Netanyahu was focused on the goal of making some of the territory officially part of Israel, a longstanding goal of many settlers. Supporters of the settlements in the United States, from evangelical Christian Zionists to the Jewish community’s right wing, also cheered on the prime minister’s pledges to annex.

He said he was going to do so in July, but July came and went. Now the prospect seems even more distant. Yes, Netanyahu said he would still deliver annexation. But officially the process has been suspended, when fewer than two months ago it appeared to be imminent.

“They pulled a fast one on the settlers,” one settler mayor said.