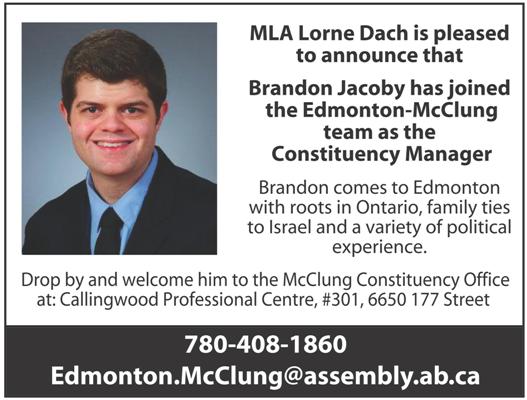 (EJNews) – McClung is home to many of the Jewish institutions in the City of Edmonton, from Chabad, to the Beth Israel Synagogue, to Talmud Torah School, and now it is home to another Jewish resident who will be able to give a Jewish perspective to the MLA’s office, Brandon Jacoby.

Jacoby was recently hired by MLA Lorne Dach as his new Constituency Manager, which means on a day-to-day basis Brandon will have his fingers on the pulse of the community and the entire McClung constituency. Jacoby’s background in politics at every level, and experience with immigration issues made his hire an easy one, and the fact that he is Jewish and therefore able to help MLA Dach better understand the community as a whole is a cherry on top. 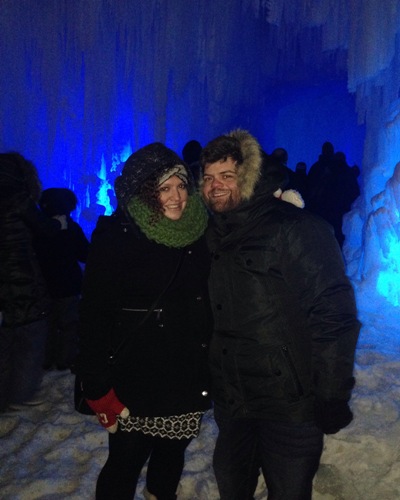 Born in Thornhill, Brandon’s family history includes both Israeli Independence Day War veterans, and Holocaust survivors. After briefly flirting with the idea of teaching, Brandon transitioned into the world of politics, completing a Bachelors of Arts Degree in Geographic Analysis with a Minor in Politics and then earning a Master’s Degree in Immigration and Settlement Studies. After showing his research and thesis on voting patterns of ethnic and visible minority groups to Olivia Chow in Toronto, Brandon was hired and his political career began.

After securing a few contracts with the NDP and working on a mayoral campaign in St. Catharines, Ontario, Brandon’s foray into Alberta politics began during the most recent provincial election. With the New Democrat’s Orange Crush performing strong in early polls Brandon was hired as campaign manager for the McCuaig-Boyd campaign where he helped her win on election day in her Northern Alberta riding, and eventually she was named Minister of Energy in the Alberta Cabinet. Brandon says working with the NDP was an easy choice for him because social democracy plays a huge role in his life, and what he believes in.

Now that he has moved to Edmonton and spent the past month and change working with MLA Dach and the Government of Alberta, Brandon is looking forward to the future and continuing to help keep McClung strong and make sure that MLA Dach is well informed and educated on community matters.

When asked about his initial perceptions on the Jewish community in Edmonton Brandon said he found the community to be very “accepting, accommodating, and welcoming to him as a newcomer.” It’s a smaller, community than the one he grew up around in Toronto, but the size of our community has made it closer and more tight nit. He even quipped that upon being introduced to him during a Tu B’Shvat celebration, a few members of the community were quick to say in Fiddler style “we have just the girl for you!” His response was “I’m already engaged to a lovely Jewish girl from Toronto, who will be joining me in Edmonton in May.” Brandon’s fiancé Racelle is currently completing her Master’s Degree of Social Work in Toronto, but having visited Edmonton earlier this year with Brandon she is looking forward to making the move herself and joining the community as well.

Welcome to the community Brandon Jacoby!