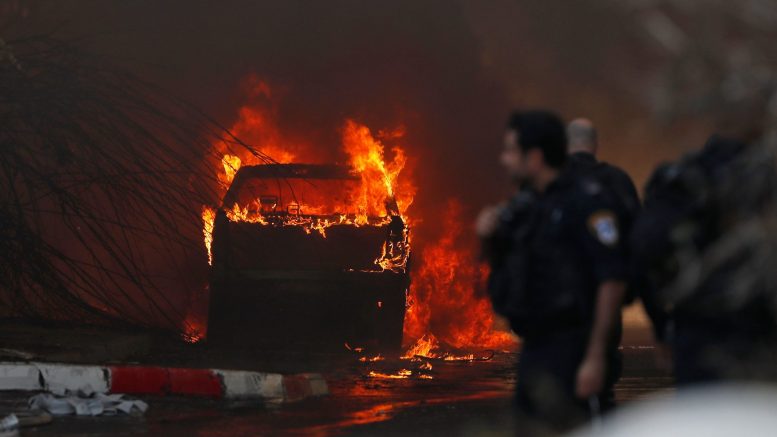 A vehicle parked in front of a factory that was reportedly hit with rockets fired from the Gaza Strip catches fire in the southern Israeli town of Sderot on November 12, 2019. - Israel's military killed a commander of Palestinian militant group Islamic Jihad in a strike on his home in Gaza early in the morning, prompting retaliatory barrages of rocket fire from the Gaza Strip towards Israel where residents ran to bomb shelters while air raid sirens rang out in various parts of the country. (Photo by Ahmad GHARABLI / AFP) (Photo by AHMAD GHARABLI/AFP via Getty Images)

(JTA) — Fifty-eight Israelis were injured during the wave of rocket attacks fired by terror groups from Gaza this week. Thirty-four Palestinians, most of them reported to be members of Islamic Jihad and other Gaza terror groups, were killed in retaliatory strikes.

The attacks cost the Israeli economy $315 million and three homes were directly hit, the Consulate General of Israel in New York said in a statement Thursday.

One of the rockets hit an an assisted-living facility in the southern Israel city of Ashkelon, injuring a woman in her 70s. Israel retaliated in an operation it called Operation Black Belt.

The initial airstrike into Gaza also killed at least eight members of Malhous’ family. BBC reported that 111 Palestinians were injured in the exchange of fire.

“Israel is not interested in an escalation, and quiet will be met with quiet. However, Israel will take all necessary steps to protect its citizens and will not tolerate attacks by terrorist organizations that target Israeli civilians,” the consulate’s statement added.

Be the first to comment on "34 Palestinians killed, 58 Israelis injured in rocket attacks from Gaza and Israel this week"