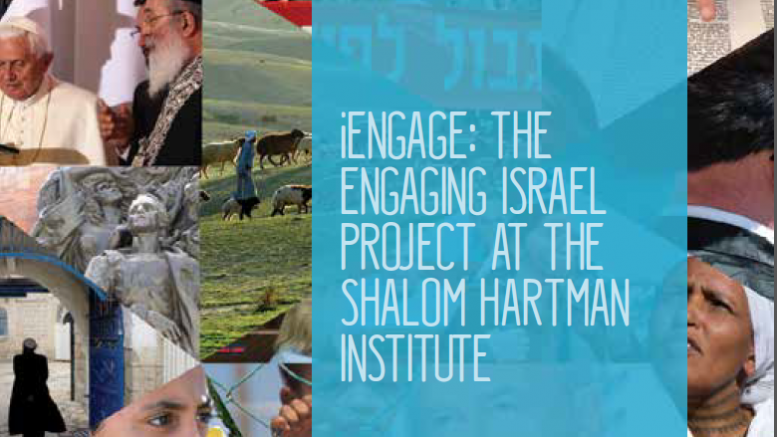 (EJNews) – Edmonton’s Beth Tzedek congregation is privileged to present the first of several Hartman Institute video lectures to the Jewish community on Sunday afternoon, December 20th at the Talmud Torah School. Please reserve that date on your calendar so that you can participate in a timely and first-rate educational experience.

The video series is titled “Engaging Israel: Foundations for a New Relationship.” It is an exploration of Jewish values and concepts that are at the core of Israel’s existence. Understanding these values and concepts will facilitate an enriched and new covenantal relationship between world Jewry and Israel. 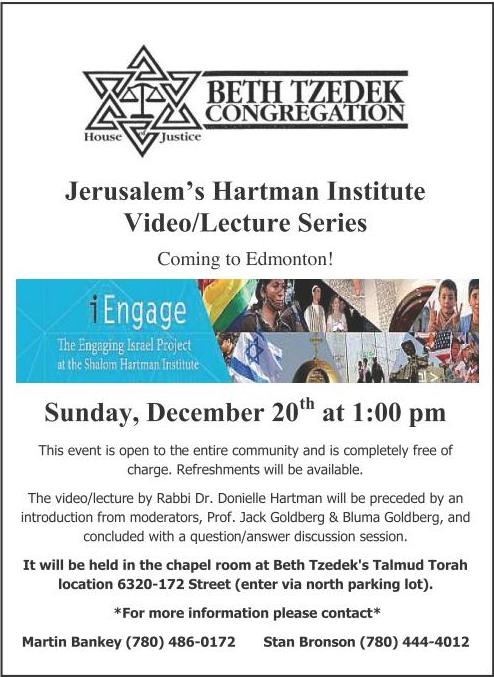 Achieving such a new relationship is most desirable in view of the amount of discord about Israel found in parts of the Jewish and non-Jewish communities.  The Hartman video lectures are intended to diminish discord and foster a positive relationship with Israel in a novel manner. The lectures lift the level of discussion by immersing us in an analysis of relevant Jewish and universal values rather than by engaging in what might be perceived as public relations; or by debating specific issues, policies and historical facts.

The video lecture is titled “From Crisis to Covenant.” In it the charismatic Rabbi Dr. Donniel Hartman eloquently explains that appeals for the loyalty of world Jewry to Israel continue to be made on the basis that all Jewry is in peril. He argues that this crisis narrative is no longer true. Rather we have immensely powerful, self-assertive and successful Jewish communities both in and outside of Israel that can contribute significantly to each other.  Maintaining Jewish unity in this new reality, especially on college campuses, requires a new relationship with Israel based on a new set of rules explained in the lecture.

The topics of the video lectures to be shown in the future are: Religion & Peoplehood; Sovereignty & Identity; Power & Powerlessness; War & Occupation; Morality on the Battlefield; Jewish & Democratic State; Religious Pluralism & Human Rights; and finally – Values Nation (dealing with the proposal that Israel can become a world leader in disseminating values). Video/Lectures will be followed by discussion led by guest moderators.

The Hartman Institute was founded by Rabbi Dr. David Hartman. He was ordained by the great Rabbi Joseph Soloveitchik and became one of the great Jewish scholars and philosophers of the 20th and 21st centuries. He wrote many books, perhaps none as remarkable as his last: “The God who Hates Lies.” He assembled a group of first rank scholars in his institute. Many of them appear as discussants in our “Engaging Israel” series. The opportunity to learn from such a stellar group will prove to be exceptionally informative, stimulating and thought provoking.

The Institute has made significant contributions both to Israel and to world Jewish communities. In Israel it has developed Judaic curriculum for secular Israeli high schools. Also, as a result of the expertise of its scholars in Jewish and universal ethics, it was commissioned by the Israel Defense Forces to write a code of ethics for the military. It has a high profile in the rabbinic community because it attracts many North American rabbis to its educational programs at its campus in Jerusalem.

Rabbi Dr. Donniel Hartman, the lecturer for our series, is the son of David Hartman. My wife, Bluma, and I have had the privilege of hearing many of Donniel’s live and video lectures in Florida. He is an intense, dynamic, humorous and brilliant speaker. His depth and his artistry with words are so compelling that I can listen to the same lecture repeatedly and continue to enjoy it and learn from it.

On Saturday, December 19th, a day before the video lecture, an optional introductory preview based on textual material from the series, will be provided following our Shabbat service (between 10 am and 12 in the Talmud Torah chapel). Please join us for our beautiful service and get a head start on the Hartman material. Because we conclude with a delicious Kiddush please try to notify our president, Stan Bronson, prior to coming (Ph: 780-444-4012 or E-mail: sbronson@shaw.ca)

For a unique experience please join us Sunday afternoon, December 20th from 1:00 pm to 3:30 pm. at the Talmud Torah. We look forward to seeing you there.