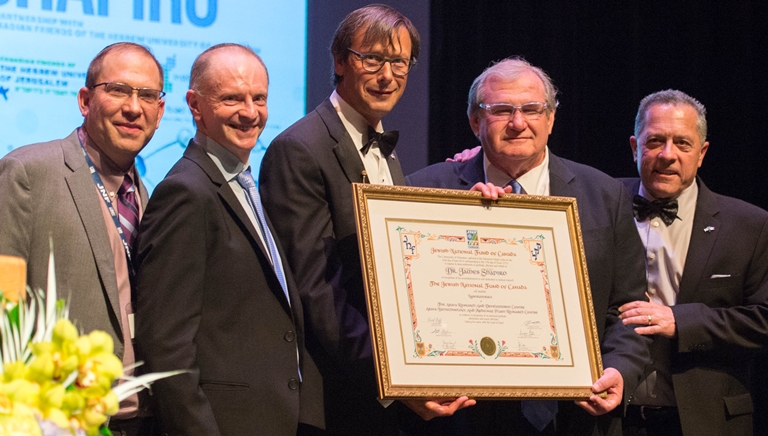 (EJNews) – The Jewish community of Edmonton gathered on the evening of June 23, 2016 in a joint venture between the Jewish National Fund (JNF) of Edmonton and the Canadian Friends of the Hebrew University (CFHU) of Jerusalem to honour Dr. James Shapiro at this year’s 2016 Negev Gala. As you have no doubt read in previous editions and online, Dr. Shapiro was honoured for his groundbreaking achievements and continued research in the treatment of diabetes. He is specifically known for the development and implementation of an islet transplantation technique known as the ‘Edmonton Protocol.’ 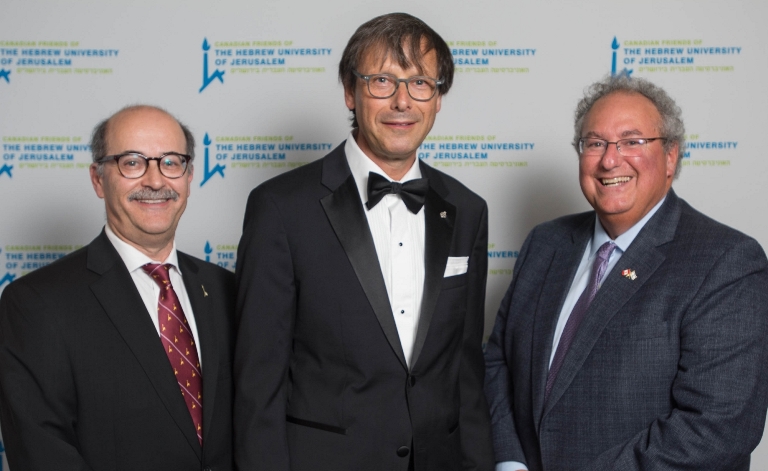 Dr. Shapiro was an excellent choice as an honouree because much of his research and work displays a strong connection between Israel and Edmonton, an ideal partnership for the JNF of Edmonton. Both Howie Sniderman and Murray Palay of CFHU in speeches touched on Dr. Shapiro’s continued work and professional exchanges with Dr. Yuval Dor from Hebrew University.

After cocktails and schmoozing at the Timms Centre for the Arts, the evening’s events began with brief introductions, and video tributes leading up to the night’s keynote speaker, Colonel Adam Susman, Defence Attache to Canada Embassy of Israel. Col. Susman gave a real voice to the ongoing conflict in Israel. He stressed the reality that being surrounded by your enemies means you must always be prepared, and that’s why continued support, financially and spiritually, helps Israel defend itself, and remain in a constant state of readiness. Susman concluded that despite the plans of Israel’s enemies both at home and abroad, the IDF remains strong, ready for anything and everything, now and in the future.

Some of the highlights of the evening were the very personal testimonials and tributes to Dr. Shapiro’s work by members of our own Edmonton Jewish community: Stephen Mandel, and Sari Leung. Hearing and seeing Sari and Stephen give such emotional and moving speeches really helped give Dr. Shapiro’s work a face and helped translate the medical and scientific component to his work into humanity. In touching moments both Stephen and Sari were brought to tears when describing their own personal relationships with Dr. Shapiro, and how his work, and his care had improved their lives. A former Mayor of the City of Edmonton, Stephen Mandel added, “The City of Edmonton owes you (Dr. Shapiro) a great deal of gratitude; we thank you tremendously for this (the Edmonton Protocol).” 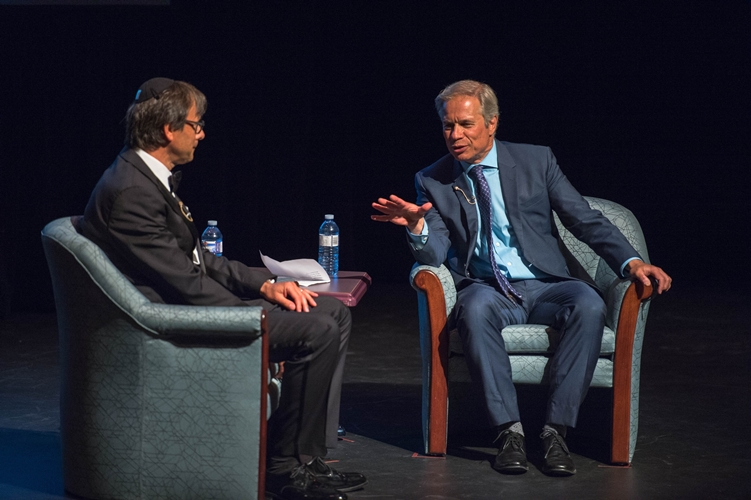 Many gala attendees were quite pleased with the format of an interview with Dr. Shapiro. After a brief introduction from Global TV’s Mike Sobel, he and Dr. Shapiro had a seat on stage and engaged in a discussion on Dr. Shapiro’s life, his work, and the intricacies of the Edmonton Protocol and diabetes research. Sobel moderated the discussion brilliantly making the always-humble Dr. Shapiro feel comfortable and open up while also instigating conversation, and making sure Dr. Shapiro spoke to his audience in laymen’s terms. Sobel and Dr. Shapiro were able to keep their conversation light, including jokes and funny anecdotes here and there; Dr. Shapiro noted he used the name Edmonton Protocol because of a Robert Ludlum book he was reading at the time, and the name just stuck.

Discussing the future was something that Dr. Shapiro spoke about quite passionately. The use of stem cells and continued research is the key to unlocking a permanent cure for diabetes, and further reducing the patient’s dependency on insulin and antirejection medications. Dr. Shapiro emphasized that although the Edmonton Protocol and islet transplantation are important discoveries and procedures, there is still a long way to go before his goal and dream of curing Type I diabetes permanently is realized; “it’s baby steps, but steps in the right direction.” Dr. Shapiro noted that with continued research, bright young scientists and global efforts to share research, their goal can be achieved, and they can help make the world a better place. To the public and to the world though, Dr. Shapiro’s work amounts to much more than baby steps, his work is groundbreaking, meaningful, forward thinking, life saving, and heroic.

In many ways Dr. Shapiro demonstrates what so many of us hold near and dear about the city of Edmonton, and our community. Like so many Edmonton success stories he has remained something of a hidden gem, doing amazing work, receiving global recognition but remaining humble and dedicated to his cause more than anything else.

The honouring of Dr. Shapiro, and format of the evening, was a refreshing change of pace for the Negev Gala in Edmonton. Although Dr. Shapiro did briefly touch on his upbringing, youth, and family ties, the night was really about the amazing and heroic work he has been able to accomplish as a medical professional. In his humble fashion Dr. Shapiro mentioned multiple times there were people in the community more deserving of this honour, but that speaks to the more traditional way of honouring a community member, based primarily on their involvement in Jewish life. In Dr. Shapiro, JNF and CFHU honoured a man who is Jewish, and a member of the Jewish community of Edmonton but also a man whose heroic marvels and life saving research trump his religious identity; attendees are richer now for having heard him speak, learn of his accomplishments, and how he’s not done yet.

The 2016 Negev Gala was in support of the Arava Research Development Centre in particular the Biotechnology and Medical Plant Laboratory. Proceeds from the Gala will also help support continued research initiatives and collaborations between Dr. James Shapiro and the Institute of Medical Research Israel-Canada.

Click here for more photos from the 2016 Edmonton Negev Gala.

Be the first to comment on "2016 Edmonton Negev Gala honours Dr. James Shapiro – a modern hero"