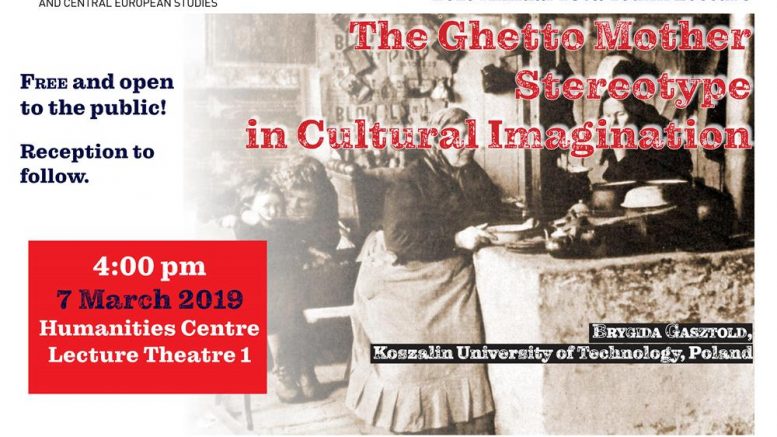 (Edmonton) – This Thursday, March 7th the Wirth Institute for Austrian and Central European Studies will host the 10th Annual Tova Yedlin Lecture at the University of Alberta. This yearly lecture welcomes a prominent scholar to the UAlberta campus to illuminate research on the history of Central and East European Jewry prior to the Holocaust with particular emphasis on Jewish-Gentile relations from the sixteenth to the nineteenth centuries.

This March, Polish scholar Dr. Brygida Gasztold from Koszalin University of Technology will deliver her talk “The Ghetto Mother Stereotype in Cultural Imagination.” The lecture will be held at the main lecture theatre (L-1) in the Humanities Centre Building at the University of Alberta main campus. Free to attend and open to the general public, the 4:00pm presentation will be followed by a question and answer session and a coffee and pastry reception.

Dr. Tova Yedlin, a long-time University of Alberta professor in what was then the Department of Slavic and East European Studies, was a fixture in the lecture audience each year until her passing in 2017. Born in the city of Równe in the Wołyń Voivodeship of inter-war Poland (now Rivne, Ukraine), she graduated with distinction from the Tadeusz Kościuszko State Gymnasium-Lyceum in 1939. Evacuated to the Volga region of the Soviet Union after the German invasion of 1941, she escaped the mass-murder of Jews that took place there in 1941 and 1942, and immigrated to Canada after the war in 1948.

Moving to Edmonton in 1950, Dr. Yedlin earned a B.Ed. (1956), an M.A. (1959) and a Ph.D. (1969) from the University of Alberta, where she subsequently taught Russian literature and social and intellectual history until her retirement in 1996. Publishing several books throughout her career, her principal work, published in 1999 was a political biography of the Russian author, Maxim Gorky. In the years following her retirement, she actively engaged in building and supervising the Moshe Yedlin Memorial Library on Jewish studies at the Beth Shalom Synagogue in Edmonton. She took a passionate interest in the activities of the Wirth Institute pursuant to her namesake lecture and, with her fierce wit, knowledge, and intellect, she sparkled as a conversationalist – in any of the seven languages she spoke.

For over a decade, the Tova Yedlin Lecture series has generously enabled the Wirth Institute to invite diverse speakers from across the globe to probe topics ranging from Jewish identity to Jewish geography and comparative perspectives across Central Europe. The endowment that supports the Tova Yedlin Lecture Series was established in November of 2007 by Dr. Yedlin’s daughter, Mrs. Deborah D. Yedlin and her husband, Mr. Martin P. Molyneaux, to honour their mother’s many years of service to the University of Alberta, and her significant contributions to East European scholarship. It is an honour for the Wirth Institute to facilitate this annual lecture which has since become a cornerstone of the Institute’s Jewish Studies program. The Institute looks forward to future years of hosting this vibrant lecture series and highlighting this rich and deeply fascinating area of Jewish Studies.

Be the first to comment on "10th Annual Tova Yedlin Lecture to be delivered by Dr. Brygida Gasztold: March 7"