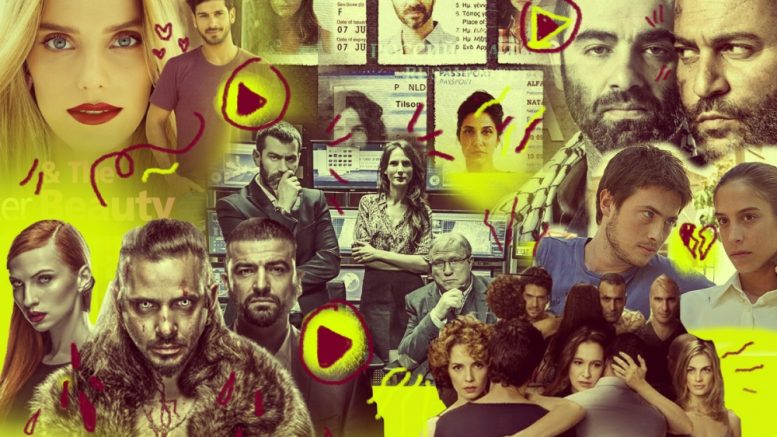 I love “Shtisel,” you love “Shtisel,” everybody loves “Shtisel”! The Israeli show, about a haredi Orthodox family of the same last name, is taking American audiences by storm. Streaming on Netflix, this show has been covered by The New York Times and even has a Facebook fan group with more than 6,000 fans.

I totally get the hype — “Shtisel” is truly an impeccable show. Its only flaw? It is only two seasons and unlikely to have a third season.

If you’ve already plowed through the series, what’s a mom with insomnia (say, um, for example) supposed to binge watch now? Well, dear reader, do not fret. From Netflix to Amazon, it seems the world is onto the fact that Israel makes some truly incredible TV.

These days, there is a delightful array of Israeli content on all your favorite streaming platforms. Seriously, it’s an embarrassment of riches. What’s even better is that many of these shows have cast members in common with  “Shtisel” — Israel is a small country, after all.

So grab your snacks of choice, put those kids to bed (or if they’re older, plop them on the couch by you), and get ready to binge your heart out.

The Beauty and The Baker (Amazon Prime)

High production value, a gorgeous cast, lots of DRAMA, and even one cute overbearing Yemeni Jewish mom. What doesn’t this soapy show have?!?

In this star-crossed romance, poor pita baker Amos meets Noa, an international supermodel and actress, and an explosive romance ensues. But Noa’s agent and Amos’s ex band together to try and break the two apart. Will true love conquer all? Watch and find out!

As Britain’s Channel 4 presenter Walter Izzuliuno says, “If TV is a drug, then this is an addictive, delicious medicine that’s guaranteed to make you feel better.” I concur!

And of course, as with any good Israeli show, ABC has a pilot based on this thoroughly enjoyable show in production.

“False Flag” is terrific, and a total nailbiter.

In its first season, five Israelis wake up one morning to find that they are implicated in the assassination of an Iranian politician. They’re teachers, new immigrants, and a bride on her wedding day — not really folks you’d expect to be involved in a complicated Mossad mission. The news wreaks havoc on their lives and puts them under scrutiny from the media and the police.

But are they as innocent as they profess to be? Watch this show to find out. No, seriously: Watch it.

(And yes, there is an American adaptation in the works.)

When Heroes Fly (Netflix)
This drama features some familiar (and handsome!) faces for lovers of Israeli dramas. First off, there’s Michael Aloni who plays Akiva (Kiveh) in “Shtishel,” and Tomer Kapon, who audiences know as Boaz in “Fauda.” They each star as veterans of the Second Lebanon War, dealing with its trauma in different ways.

Along with two other former teammates from the army, they go to search for Yaeli, who is the sister of one of the soldiers and the ex-girlfriend of Kapon’s character. Yaeli was believed to have been killed in a car accident in Colombia but was recently spotted by a photographer there. Despite their socio-economic and religious differences, the four band together to find out to find out what happened to her.

Based on an incredible book by Amir Gutfreund, the show has been renewed for a second season. And, you guessed it, there’s an American adaptation in the works. Don’t miss it.

This delightful comedy’s title is Hebrew for “The Good Cop.” It’s been kept in Hebrew because Netflix bought an adaptation for it, “The Good Cop,” starring Josh Groban and Tony Danza (!), which somehow was not as good as you would expect it to be. But the Hebrew counterpart is one of my favorite shows in a long, long time.

There’s just something so satisfying about a really good, juicy comedy with wonderful acting and poignant dramatic moments. It stars comedian Yuval Semo as a rough-around-the-edges cop who comes from a family of petty criminals. This show is not the most politically correct, but the humanity with which it treats its characters is endearing.

I swear I watched the entire first season of this show in one evening. Ayelet Zurer, who you might know as Elisheva from “Shtishel,” stars as a surgeon about to get the gig of a lifetime: She’s going to operate on the Israeli prime minister!

But alas, her family gets taken hostage, and in order to secure their release, she must do one thing: ensure the prime minister does not survive the surgery. How’s that for drama? Will she do the right thing? Will she rescue her family? Will there be some steamy illicit romance? (The answer to that last question? Yes.)

The suspenseful drama did get an American adaptation, starring my fav, Toni Collette, but unfortunately, was canceled after its first season. Le sigh. But you can watch it’s two seasons on Netflix right now.

A Touch Away (Amazon Prime)

I was slightly obsessed with this show as a teen. If you’re a fan of “Shtishel,” this show also explores the life of an observant family — in this case, in the religious city of Bnei Brak. However, it is very, very different. “A Touch Away” is a Romeo and Juliet love story about the secular son of a Russian immigrant and the daughter of a haredi Orthodox family.

It’s a touching (see what I did there?) story of forbidden love, but it also has a great portrayal of what it’s like to be a Russian immigrant in Israel and to feel like a second-rate citizen in many ways. Unlike “Shtishel,” which handles the religious world with sensitivity and nuance, this drama can be a bit heavy-handed, but it’s still an enjoyable viewing experience.

If you liked “Homeland,” I think it’s safe to say you’ll enjoy the two seasons of this very different but just as suspenseful show — in fact, “Homeland” is based on “Prisoners of War.”

In this show, two captured soldiers are released from Lebanon, to the delight of their family and the country, which embraces them and tries to help them recover from the trauma of 17 years in captivity. But when their stories don’t really match, things get complicated — and make for some really outstanding television.

I like to say “Srugim” is like the religious version of “Friends” — if the show took place in Jerusalem and was actually good (sorry, I’m a “Friends” hater).

This delightful drama, which is three seasons long, explores the dating lives of observant singles, the complexities of wanting both to date and be deliberate about life, and the pressing need and pressure to get married from your family and you know, the world.

This show’s first season is melodramatic and hilarious in the best of ways. Focusing on a group of people training to become Mossad agents, this show features comedian Hana Laszlo — who you may know as Menukha Kenigsberg in “Shtishel” — as an aspiring agent at the prestigious and secretive intelligence agency.

It’s second and last season takes itself perhaps too seriously but is still highly worth the watch.

This show is a secret gem. It’s based on an autobiographical story of the same title written by Noa Yaron-Dayan, a former TV and radio personality who joined the Breslov Hasidic sect.

Fauda (Netflix)
Seriously — if you haven’t watched “Fauda” yet, remedy this ASAP.  This series has everything going for it. With both Palestinian and Jewish fans, the drama, which has two seasons so far, was created by and stars Lior Raz, and is loosely based on his army experiences in the Duvdevani Unit, known for its covert operations.

It’s about secret agents, targeted killings, suicide bombings and so much more, but it explores these topics with depth and sensitivity.

This vampire show is coming to Hulu soon and I really can’t wait. I’ve watched the first two episodes, which are available to stream (quite legally) in Hebrew through the Hot YouTube page, and I can say that it is just a fun, campy and dramatic vampire show — and, I mean, it’s been a while since “True Blood” ended.

This show, which was created by and stars Israeli comedian and musician Tzion Baruch, is a sort of dramatic comedy. A dramedy, if you will. And there’s nothing like a vampire show that doesn’t takee itself too seriously.

Plus, it’s the first ever Jewish vampire drama and it is super Jew-y (it takes Juda eight days to fully unleash his power. Get it, eight days?)