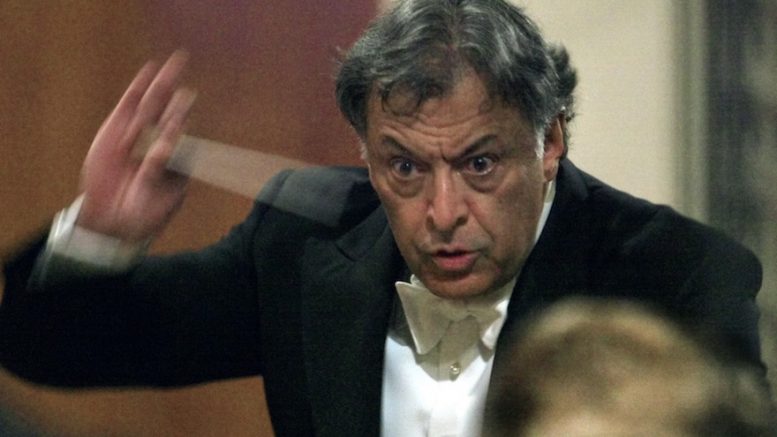 (JTA) — When Zubin Mehta kicks off a tour of North American cities at New York’s Carnegie Hall on Wednesday night, it won’t be his last performances with the Israel Philharmonic Orchestra — but it will be close.

The legendary conductor announced last December that he will step down from his post as music director in October 2019, exactly 50 years after he first became officially affiliated with the ensemble.

This is one of Mehta’s last big tours with the orchestra, and it is likely his last through North America (the IPO will not travel to the U.S. in 2018).

As such, the maestro will be feted at gala dinners in several tour stops, including New York, Toronto, Los Angeles, San Francisco and Miami. He will be celebrated there for being one of Israel’s foremost cultural ambassadors through the country’s tumultuous past half-decade.

“This will be my jubilee year,” Mehta, 81, told The Jerusalem Post earlier this month. “Now it is time for something new. … For the first time in my life I am going to be a ‘free bird.’”

At first glance, the conductor and Israel may seem like an odd pairing. Mehta, who is Indian, was born in Mumbai — then Bombay — and his father, Mehli, founded and conducted the Bombay Symphony Orchestra. But Mehta, who was considered a conducting prodigy in his 20s, quickly fell in love “not only with the [Israeli] orchestra but with the country itself.”

“It reminded me a lot of my home, Bombay,” Mehta told the Los Angeles Times in 2007. “Israelis, like Indians, are opinionated, and they have the habit of all speaking at the same time, which made me feel at home. People think this is a Jewish characteristic. It’s not. It’s Asiatic.”

At previous points in his career, Mehta was the music director of the New York Philharmonic, the Los Angeles Philharmonic and the Montreal Philharmonic, and he conducted various European ensembles at the same time. Still, over the decades, Mehta estimates he has performed over 3,000 times with the IPO. He first conducted the group in 1961, at the age of 25, and was named its music director for life in 1981.

Throughout his tenure, while Mehta has been supportive of the Israeli people, he’s been careful to prioritize art over politics — even as many musicians, including his close friend, the renowned pianist Daniel Barenboim, have refused to play the Jewish state in recent years as a protest of Israel’s policies toward the Palestinians.

And yet, conducting the IPO means inevitable ensnarement in the world of Middle East politics. Mehta was not shy about supporting or criticizing Israel when he saw fit. For example, he disagreed with Israel’s occupation of Palestinian lands, but he also often pushed the orchestra to give performances during Israel’s wars as shows of solidarity with the Israeli public.

As he gets closer to putting down his baton, here are five of Mehta’s most daring and innovative moments with the IPO.

At the outset of the war, a conductor who was slated to perform with the IPO had dropped out, and Mehta saw the situation as a musical emergency. Mehta rushed to board an ammunition-filled plane from the U.S. to Israel — it turned out to be the last plane allowed to land in the country before Tel Aviv’s Ben Gurion Airport closed during the fighting. He was able to conduct the performance and stayed in the basement of a Jerusalem concert hall for the six days, along with pianist Barenboim and celebrated cellist Jacqueline du Pré.

“I’m not sure how good the concert was musically — we weren’t exactly prepared!” Mehta said in 2011. “But Daniel played the Beethoven Emperor Piano Concerto and Jackie played the Elgar Cello Concerto.”

Fun fact: Less than a week after the war ended, Mehta pretended he was Jewish in order to act as a witness at Barenboim and du Pré’s wedding at the Western Wall.

Israel was at war in Southern Lebanon, but with the help of Israeli police, Mehta brought the orchestra’s musicians a few kilometers across the border into a Lebanese tobacco field. They erected a stage under a tent and played for a group of local Lebanese citizens. After the concert, Mehta said the concertgoers rushed the stage to hug the musicians.

“How I would love to see that sight again today, of Arabs and Jews hugging each other,” he said in 2007. “I’m a positive thinker. I know this day will come.”

After Iraq launched Scud missiles into Israel, Mehta raced to his second home yet again.

“I have literally grown up with this country over the past 30 years. I had many obligations in New York that should have prevented me from coming, but I couldn’t imagine not being here,” he said at the time, while he was director of the New York Philharmonic.

At first, the task of putting on a concert in the Jewish state was daunting, since emergency government measures prohibited mass gatherings. But Mehta ended up getting special permission to perform, and he led concerts for several mornings in a row (there was a strict night curfew during the war). At some performances, audience members brought gas masks into the performances.

Mehta helped arrange the first concert in Germany that featured the Israeli Philharmonic playing with a German orchestra — in this instance, the Munich-based Bavarian State Orchestra.

But it was not held at any ordinary German location: The concert took place just beneath the hill that formerly housed the Buchenwald Nazi concentration camp. Mehta accompanied musicians from both orchestras on a tour of the camp before the performance.

”The thought did run through my mind at the camp, how will Israelis be able to sit together with Germans this evening and play music?” Mehta told The New York Times. ”But I detected no feelings of resistance. And my feeling now is that if Jews and Germans can be together near Buchenwald after 50 years, one day there will be reconciliation with Arabs, too.”

Israeli soldier Gilad Shalit was captured by Hamas during a raid of Israeli tunnels near Gaza in June 2006. Just over four years later, Mehta took the IPO to the Israel-Gaza border to protest his imprisonment. The goal was to pressure Hamas into letting the Red Cross visit Shalit to make sure he was OK — and, of course, to pressure both Israel and the leaders of Gaza to negotiate a deal for Shalit’s release.

“I hope he knows we are doing this concert and one day very soon he will know every note we play goes out to him,” said Mehta, who was 74 at the time.

Shalit was freed in a prisoner exchange the following year.