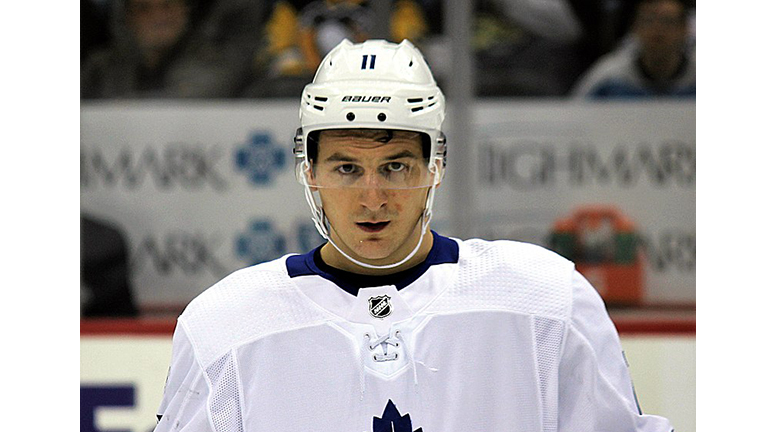 Zach Hyman has signed a 7 year contract with the Edmonton Oilers after playing 6 seasons with his home-town team the Toronto Maple Leafs. (Photo By Michael Miller - Own work, CC BY-SA 4.0)

(AJNews) – Recent Edmonton Oilers acquisition Zach Hyman says the supportive Jewish environment he was raised in gave him a strong foundation of support for launching and sustaining his professional hockey career.

“It was very familial,” Hyman, who has four brothers, says of his Jewish upbringing in Toronto. “I had great, supporting parents, who really believed in me and tried to encourage me to follow my dreams and my passions. And I had a great support system of extended family, and of course a very strong community behind me.”

Hyman, 29, signed a seven-year $38.5-million contract with the Oilers in late-July after playing six seasons with the Toronto Maple Leafs, where he scored 185 regular season points — 86 goals and 99 assists — as well as 13 playoff points.

“That was a special time to be able to play for my home team to start my career out, but I’m really excited about this new chapter in my life and this new opportunity,” Hyman said.

He says he’ll be moving to Edmonton in early September in time for Oilers training camp. He plans to grow his family and provide his kids with a strong Jewish communal upbringing, just like the one he had.

Hyman, who says he knew he wanted to play in the NHL from a young age, describes his Jewish upbringing as secular — he grew up attending shul on the High Holidays and doesn’t consume pork. “For me, being Jewish is more than just a religion. Obviously, there’s a really big communal aspect to it,” he said, describing the distinction between various religious denominations as “blurred”.

He received a full Jewish day school education growing up in Toronto — first at the United Synagogue Day School, and then at the Community Hebrew Academy of Toronto Tanenbaum Campus for high school, where he met his future wife, with whom he has an eight-month-old son named Theo and a Siberian Husky dog named Whitey.

After taking a year off to focus on hockey, Hyman spent four years playing hockey on a scholarship at the University of Michigan starting in 2011, where he majored in history.

While his Jewish education provided him with a strong communal foundation, playing hockey allowed Hyman to expand his social sphere outside the Jewish bubble, interacting with people of various backgrounds, he says.

“For me, leaving home and going to university outside of Toronto obviously was a change, but I think hockey prepared me for that,” said Hyman. “It was an incredible experience. I learned a ton there, and it really helped propel my hockey career and shape my career too.”

In 2013, he represented Canada at Israel’s Maccabi Games, where he won a gold medal.

Hyman was number 11 on the Leafs, but he can’t use that number on the Oilers, since it’s retired as Mark Messier’s, so Hyman will be playing as number 18, which is the day in December Theo was born on, in addition to its Jewish significance of chai, the hebrew word for life.

Hyman has published three children’s books with Penguin Random Rouse since 2014 — The Bambino and Me, Hockey Hero and The Magician’s Secret.

Ultimately, Hyman says the Toronto Jewish community’s support for his ambitions, from his teachers who allowed him to do work outside the classroom to accommodate his hockey commitments to his family’s large network of friends who all wanted to see him succeed, was instrumental in his success. “Everybody was cheering for me and supporting me, and rooting me on,” he said.

Favourite Jewish holiday: Pesach, because you could always go away for spring break, so I would go to California to visit my grandparents.

Montreal or Toronto bagels? (Laughs) You’re going to do that to me? Toronto, I guess.