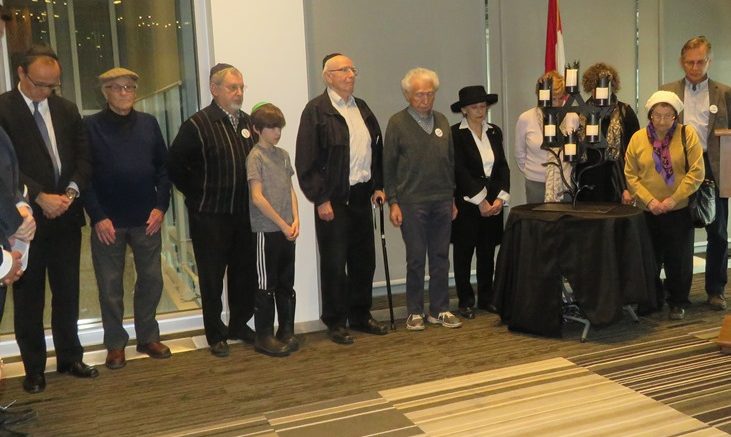 Holocaust Survivors and their families participated in a poignant candle lighted ceremony at the Federal Building in downtown Edmonton on Yom Hashoah - Holocaust Remembrance Day April 12, 2018.

(EJNews) – Yom Hashoah – Holocaust Remembrance Day was commemorated in Israel and around the world on April 12, 2018. In Edmonton a commemorative service and ceremony was held at the Federal Building in downtown Edmonton. In prior years the Yom Hashoah service was held at the Holocaust Monument “Vessel of Souls” which stands proudly on the Alberta Government Legislative Grounds. This year, the ceremony moved indoors because the weather was too severe for the survivors to sit out side and participate. Everyone agreed that this move was important because Yom Hashoah pays tribute to the millions of Jews who perished in the Holocaust and honours those who survived to tell the world about the horrors they faced.

The event opened with emcee Gillian Horwitz, a representative of the Jewish Federation of Edmonton’s Holocaust Education Committee, welcoming the survivors and their families as well as the 250 plus crowd that was in attendance.

The first speaker was Steve Shafir, president of the Jewish Federation of Edmonton. He said, “It is an honour to join you today, to be part of a community of people who commemorate and remember the tragedies and horrors that almost saw the destruction of all European Jewry.

“During the Holocaust, 11 million people were murdered by the Nazis, 6 million of whom were Jewish and of those 1.5 million were children. Our message today should be that we, as human beings, should pay attention to the signs of hatred; we should speak out against hate in order to prevent it. Don’t sit idly, don’t be a bystander. You have a voice and you have a choice.”

First, Minister Miranda and then Mayor Iveson spoke beautifully about the importance of remembering and honouring the Holocaust and doing what we can to have zero tolerance for bigotry.  They both emphasized the need to promote inclusivity and understanding in our neighbourhoods and communities.

The service started with a prayer for the victims of the Holocaust read by Francie Cyngiser and then Dani Uretsky, Director of the Holocaust Education for the Jewish Federation of Edmonton invited the Holocaust survivors in our community to take part in a candle lighting ceremony in memory of the Jewish lives taken during the Holocaust. Participants in the ceremony were Anna Linetsky, Henry Cynamon and Abe Goldstein, Abe Silverman and his grandson Ben, Ann Sector and her daughter Suzanne Davis, Clara Kagan and her son Leon Kagan and George Kraus and his son Michael Kraus.

Jordyn Wright, a representative of youth who attended the March of the Living did a reading, followed by the recitation of Mourner’s Kaddish by Rabbi Kliel Rose and the chanting of El Mohel Rachamin by Rabbi Daniel Friedman.

A D’var Torah was provided by Rabbi Gila Caine who emphasized how important it is to hear the stories and learn about the lives of the survivors in our community.

Students from the Talmud Torah Choir under the direction of their teacher Ben Ragosin performed Eli Eli, The Little Station Treblinka and the Partisan.

Gillian Horwitz closed the ceremony before the singing of Hatikvah. She said, “We, the generation born after the Holocaust, carry the legacy of six million voices. The torch of remembrance will be carried on from generation to generation. It is a torch that will not be extinguished as long as we remember. We must also take note that anti-Semitism is still rife in many parts of the world. Mireille Knoll who survived the Holocaust, was killed recently in her Paris apartment – another victim of a vicious anti-Semitic attack.

“We need to continue to teach the lessons of the Holocaust to attempt to eradicate irrational hatred and bigotry from the face of the earth. Thus, we come together here today to remember, zachor!

“It is important that in today’s society, we do not forget any form of genocide and that we educate future generations, so that we can prevent it from happening again.”

Our photo gallery from Yom Hashoah 2018 can be viewed here.