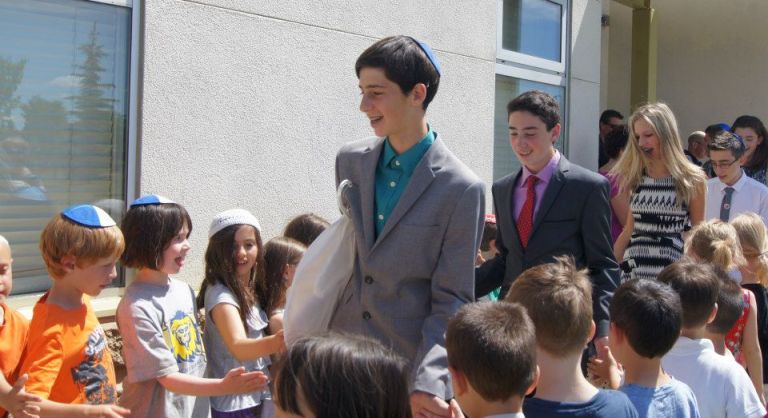 (JTA) – When Ali Martell’s eldest daughter reached school age, Martell and her husband both assumed she’d go to a Jewish day school, as they had.

And for a while, she did. But after the couple’s two younger children started school, too, the Martells began to feel overburdened by tuition. They couldn’t afford to send their kids to the summer camp of their choice, replace their aging minivan or go to Israel for a cousin’s bar mitzvah. So three years ago, they pulled their kids out of their Toronto Jewish day school and enrolled them in public school.

But this fall, Martell’s kids are all going back to Jewish day schools.

“My husband I were both happy that we had a bit of financial flexibility, but we were really missing the Jewish day school system,” Martell told JTA. “We just didn’t feel connected to the community like the way our kids were when we were in Jewish day schools.”

The last straw came on Israeli Independence Day this past May, when Martell found herself teary eyed watching her friends’ day school kids marching down a blocked-off street wearing Israel’s blue and white. For her kids, Yom Haatzmaut was just a regular school day.

“As a family, we were all feeling that little piece was missing from our lives,” Martell said.

The Martells are among the many Jewish families who are making the switch this fall from public school to Jewish day school. Though precise data about such students doesn’t exist, record-keeping at the Avi Chai Foundation suggests that the annual number of switchover students is at least in the hundreds: In the last year alone, Avi Chai was aware of 200 or so public school children switching to Jewish high school.

While transferring the opposite direction, from Jewish day school to public school, is probably more common and has an obvious financial benefit, there are a variety of factors motivating families to go the other way.

Many do so for the same reason families choose Jewish day school from the get-go: because they value a Jewish education. Without the financial means, some families opt to split their kids’ education between public school in the early years, then Jewish day school once they’re older (or vice versa).

For others, the decision can be motivated as much by “push” factors — such as the shortcomings of the local public schools — as “pull” factors, like the benefits of full-time Jewish education.

Andrea Askowitz, a mother in Miami, said she switched her kids into a Jewish day school only because her local public school, Sunset Elementary, was way too rigorous.

“I wasn’t drawn to the Jewishness, just drawn away from the inhumanity,” Askowitz said.

Some parents don’t realize what they’re missing until their child already is in public school and the parents gradually become aware of the importance of having their kid in a Jewish environment – to say nothing of the benefits of a formal Jewish education, Kramer said.

He recalled one public school father whose “aha moment” came halfway through a Passover seder, when he observed with disbelief how his friend’s day school-educated kids seemed capable of leading the seder.

“They see their friends’ kids, and they see they’re happy, excelling, building competency in Hebrew,” Kramer said. “They have the realization that unless you’re in this game you can’t play beyond the beginner level.”

Northwest Yeshiva High School, the only modern Orthodox high school in the Seattle area, usually gets a few students every year from public schools. Melissa Rivkin, the school’s advancement director, says many come from families who would have preferred Jewish education throughout but just couldn’t afford it.

“They either are from families who save until high school and then will put their kids in a Jewish school in high school because those are very pivotal years in a teenager’s life and they want them to have Jewish values, Jewish education, Jewish friends,” Rivkin said. “Or, they are kids who were in public school and didn’t like it — maybe it was too big, or the social group was too fragmented — and they’re looking at our school more as a community environment.”

Some enroll simply because they want the benefits of a small school, like access to teachers and fewer students in each classroom; Northwest Yeshiva has only 60 students in total.

For Barret Gruber Harr, a Reform Jew whose two daughters are switching this fall from public school to Hillel Day School near Detroit, the decision to switch was a convergence of considerations. She and her husband weren’t happy with their kids’ local public school, which had denied her eldest daughter’s diagnosis of attention deficit hyperactivity disorder. They had considered Hillel two years ago when they moved to the area from Dallas, but they were put off by its seeming Orthodoxy.

Then they learned from friends that Hillel recently had undergone a philosophical change, and they took a second look. Initially skeptical, they fell in love with the school almost immediately. Harr, who is getting a master’s degree in Jewish education, says Hillel appears to be doing everything right.

“Every class we went in the kids were deeply engaged, the teachers were charismatic,” she said of her tour of the school. “They’re really cultivating 21st-century learners, and to really love Jewish values, and teaching collaboratively and creatively. I was crying by the end of the tour. I will eat ramen for the rest of my life so my kids can go to this school.”

Miriam Greenstein, who lives in the Northeast, decided to make the switch this year for her oldest daughter, who is entering the sixth grade. She had been at a Hebrew charter school,  a publicly funded school, but Greenstein decided that having excellent Hebrew-language studies and Jews among her peers just wasn’t enough.