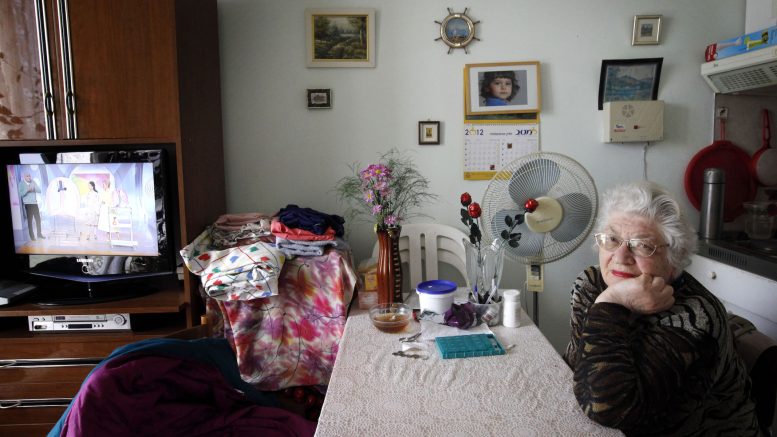 Berta, who immigrated to Israel from Ukraine, seen in Jerusalem in 2012. (Miriam Alster/Flash90)

The headlines might suggest that Christians and perhaps Muslims have been moving to the Jewish state in significant numbers, but the truth is more complicated: According to numbers released on Dec. 31, 2018,  by Israel’s Central Bureau of Statistics, 17,700 of the 32,600 migrants who moved to Israel in 2018 came under the Law of Return but were listed as “having no religion.”

Such immigrants, hailing largely from the former Soviet Union and Baltic states, count Jewish ancestry but are ineligible to marry as Jews, for example, under the state-controlled rabbinic court system. In 2017, there were 11,400 such immigrants out of a migratory population of 29,100.

The result is a heated debate over Jewish identity, the country’s strict Orthodox standards for converting to Judaism and how to best integrate new immigrants into the life of a Jewish state.

All told, there are already some 400,000 people, mostly from the former Soviet Union, living in Israel who are not considered Jewish by the Chief Rabbinate. Such immigrants and their children are “caught in a bureaucratic void, unable to marry in State-sanctioned weddings, and to partake in other basic rights of Jewish citizenry,” according to Itim, an advocacy group that works to help Israelis navigate the country’s religious bureaucracy.

Itim calls the situation “unacceptable, particularly given the dysfunctional and inadequate State conversion system, which converts a mere 2,000 Israeli citizens to Judaism each year.”

The Law of Return grants near-automatic citizenship to those with at least one Jewish grandparent. The Chief Rabbinate only recognizes them as Jews under the standards of halacha, or Jewish law: They must have a Jewish mother or have been converted to Judaism under Orthodox authorities approved by the Chief Rabbinate.

For the past several years, immigration from the former Soviet Union has again been on the rise, edging France and other Western European nations as the source for the largest number of new immigrants. Russians, many with Jewish roots, are fleeing their country’s economic stagnation. Many Ukrainians have fled from the Russia-backed military conflict convulsing the east of their country. According to Israel’s Ministry of Immigrant Absorption, more than 30,000 people emigrated from Ukraine between 2014 and October 2018.

According to a 2014 report by Vladimir Khanin, the chief scientist of the Israeli Ministry of Aliyah and Immigrant Absorption, the proportion of non-Jews among those arriving from the former Soviet and present-day Baltic states has been increasing for decades. While only between 12 and 20 percent of immigrants were considered non-Jews when immigration started in earnest following the Cold War, their numbers rose to between 40 percent and half in the late 1990s. By the first decade of the 2000s, the share of those designated as non-Jewish was between 56 and 60 percent.

In a country where demographic arguments carry political weight from everything to issues of religion and state to the peace process, accurate numbers are critical, said Israeli demographer Sergio DellaPergolla. He said the new figures stand at odds with some of the rhetoric being employed in Israel’s public policy debates.

“Considering that Jews compose 75 percent of the total Israeli population, the growth of the non-Jewish components was faster and therefore the Jewishness of Israel diminished — in spite of the triumphalist declarations by certain political circles that the Arab fertility rate has diminished,” he said.

While some three quarters of Israel’s current population is considered Jewish to one degree or another, “if we were to take out from that [total] all the people who made aliyah who aren’t halachically Jewish, the number of Jews would go down to less than 65 percent,” Farber told JTA. “It would essentially destroy the Jewish State of Israel.

“Israel is doing a decent job of bringing people here but a terrible job of bringing these immigrants fully into the fold of the Jewish people. Because the only way to do that is to guarantee their full rights here in Israel and particularly to be married. And the only way to do that is to provide a system of conversion that would be accessible and traversable and unquestioned down the road. The Rabbinate is putting its head in the sand regarding a demographic time bomb for the people of Israel.”

Farber insists that given their Jewish ancestry and desire to become part of the Jewish political and cultural collective in Israel, it would be immoral to deny the newcomers entrance in the first place, as some among the haredi Orthodox have suggested.

“It’s not reasonable from a moral and family perspective,” he said. “A lot of these people suffered as Jews and have firm and strong Jewish identities, not necessarily religious identities, but they are part of the body of the Jewish people.”

“I think that we know already as a fact for the last two to three years that most of the immigrants that arrived from Ukraine are not halachically Jewish,” he said.

In Ukraine, his organization opened an office several years ago to help prospective immigrants to Israel prove they are Jewish.

“The change should be simple,” Stav said. “We offered this years ago: Convert the kids while they are minors.”

However, without an overhaul, interfaith marriage and assimilation will increase significantly, he warned.

For his part, Farber said that his organization had been working outside the official rabbinical court system to convert children, who, unlike adults, are not required to accept religious observance as part of the process. This year would mark the 1,000th such conversion his organization has facilitated, he said.

“Our goal,” Farber said, “is [for this] to become the policy of the State of Israel.”