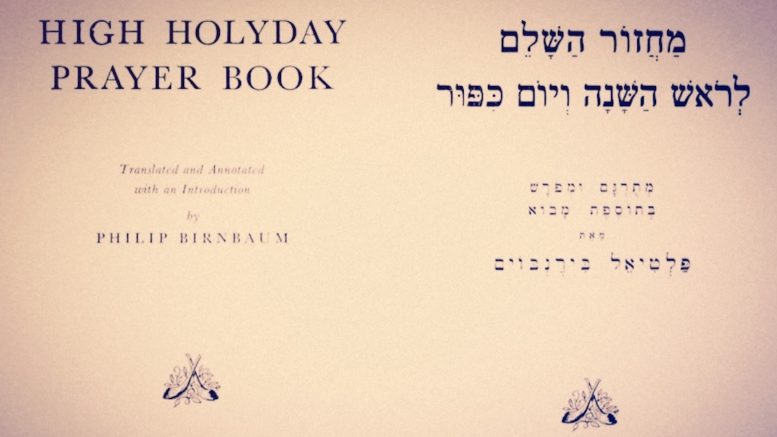 The Birnbaum machzor, first published in 1951, remained a staple of Orthodox synagogues despite a bounty of competitors. (The Open Siddur Project)

(JTA) — When a local Orthodox synagogue asked me to lead Yom Kippur prayers six years ago, one aspect of the request stood out: Was I comfortable using the “High Holyday Prayer Book” translated and edited by Philip Birnbaum?

The archaic spelling of “Holyday” is a tipoff to the book’s longevity. First published in 1951 by the Hebrew Publishing Company, this Hebrew-English prayer book, or machzor, has been used by multiple generations of worshippers in Orthodox and, to a lesser extent, Conservative synagogues. It is the prayer book I used as a child; my earliest High Holidays memories include counting the number of pages in the Birnbaum machzor until services would end.

In the ensuing  years, a bounty of new translations has appeared, with modern typefaces, helpful commentary, user-friendly language and supplemental readings meant to “open doors” into prayer for the uninitiated or easily distracted.

Yet come Rosh Hashanah and Yom Kippur, I will lead the services from a Birnbaum covered in brown paper and penciled notations of what to say and what to skip. Remarkably, 70 years after its publication, the Birnbaum Machzor is still here, outlasting its publisher, author and even its own copyright. On the occasion of its anniversary, we ought to consider its remarkable longevity and what its future might hold.

Philip (or Paltiel in Hebrew) Birnbaum immigrated to the United States from Poland in 1923 at the age of 19. While teaching Hebrew school in Birmingham, Alabama, he obtained an undergraduate education at the Southern Baptist-affiliated Howard College (now Samford University). After moving to the East Coast, he received his doctorate in Jewish history from Dropsie College in Philadelphia in 1942.

Throughout his career, Birnbaum forged connections with rabbis and academics affiliated with both the Conservative Jewish Theological Seminary of America and the Orthodox Yeshiva University. In 1944, the Hebrew Publishing Company — a fixture on the Lower East Side of Manhattan that printed everything from prayer books to greeting cards to Yiddish translations of Jules Verne — published his abridged version of “Mishneh Torah,” Maimonides’ seminal code of Jewish law. Given the success of the volume, the company’s president asked Birnbaum to translate the siddur, or daily prayer book.

Birnbaum’s edition of the siddur, first published in 1949, outsold every other English translation and turned Birnbaum into a household name among Orthodox synagogue-goers. His 1951 machzor had a similar trajectory, rapidly becoming a High Holidays mainstay. In the 1960s, Birnbaum’s publisher reported that he saw the machzor on the shelf in faraway Hong Kong and Tokyo.

A few years ago, when my grandfather gave me a small 1903 machzor that had been in the family, I began to understand the appeal of the Birnbaum machzor. The 1903 prayer book, with the unwieldy name “Form of Prayers for the Day of Atonement,” is hardly usable. It includes a hodgepodge of Hebrew and Yiddish instructions and inconsistently sized texts that sometimes lack vowels. Its head-scratching English rendition of the “Song of Glory” (Shir HaKavod or Anim Zemirot) begins, “Sweet hymns I will sing, and songs will I indite, for unto thee my soul panteth.”

To make matters worse, it sent me flipping frantically back and forth searching for the next prayer to say.

Birnbaum’s introduction to his translation speaks directly to my experience with the 1903 machzor and its ilk.

“The worshipper is not called upon to search from page to page and to commute from reference to reference,” he wrote about his own work. Birnbaum lamented the “gross carelessness” of earlier machzorim that included pages “broken up by several type sizes which have a confusing effect on the eyes of the reader” and translations that were “a vast jungle of words from which a clear idea only rarely emerges.”

Not all of Birnbaum’s predecessors were guilty of these faults. The 1904 British machzor translated by Arthur Davis and Herbert Adler, which also was used in the United States, was well-organized and exquisitely translated. Yet it came in three hefty volumes and still suffered from a generous dose of what Birnbaum derided as “Bible English.” To a lesser extent, these archaisms also plagued the one-volume machzor published by Morris Silverman in 1939 and which for decades was the official machzor of the Conservative movement.

The Birnbaum machzor took hold because it outshone its competition, but its staying power can be explained by simple economics. Once a synagogue purchased copies for its congregants, switching to a different book was an expensive proposition. Further, the machzor is used only a few times a year, so it wears out at a fraction of the rate of a Shabbat prayer book or synagogue Bible.

Also, unlike much of its competition, the one-volume Birnbaum machzor includes the services for Rosh Hashanah and Yom Kippur. While the ArtScroll daily siddur, published in 1984 by Mesorah Publications, quickly replaced the Birnbaum siddur in a vast number of Orthodox congregations, the ArtScroll machzor, with separate volumes for Rosh Hashanah (1985) and Yom Kippur (1986), did not meet with quite the same success. I suspect that a number of congregations could not justify the expense of purchasing so many new books when their Birnbaums were holding up just fine.

Indeed, when Dr. Birnbaum died in 1988, heralded in The New York Times as “the most obscure bestselling author,” his machzor was still going strong. The Hebrew Publishing Company continued to reprint it into the mid-1990s. The publisher ceased to exist sometime around the turn of the 21st century and the machzor’s copyright was not renewed. It is now in the public domain and can be perused online. What other book enjoys such widespread popularity 25 years after going out of print?

Yet without much chance of being reprinted, the machzor’s reign may at last be drawing to a close. Birnbaum’s frequent use of “thee” and “thou” sounds archaic and off-putting. Rabbi David Wolkenfeld of Anshe Sholom B’nai Israel in Chicago put it well when he wrote in 2016 that the Birnbaum prayer books “were state of the art when they were first published and have been sanctified by the prayers of three generations of worshippers,” but the translation “now appears stilted.” And unlike more recent translations, “there is virtually no commentary that might help the novice or veteran worshipper find deeper meaning in the unfamiliar holiday prayers.”

Extensive commentary and contemporary readings for the “novice or veteran worshiper” are a signature of newer translations like “Mahzor Lev Shalem” (2010), which has replaced Birnbaum, Silverman and the 1972 Jules Harlow machzor in Conservative synagogues within the past few years. The Orthodox Koren Publishers at last released a one-volume machzor in 2018, with commentary by the late Rabbi Jonathan Sacks. I suspect many Orthodox holdouts will abandon the Birnbaum for the Koren sooner or later. Some have already begun.

But although congregants may of course opt to bring a different machzor, there’s been no official change yet at the synagogue where I will again lead the services this year.

“For nearly two thousand years,” Birnbaum wrote in the machzor’s introduction, “the Hebrew prayers have helped to keep the Jews alive, saving them from losing their language and identity.”

Indeed, on the Days of Judgment, when we contemplate a turbulent past and an uncertain future, the prayer book is a stable text to which we can attach our hopes, dreams and aspirations. But the prayers are also complex and confusing, even to the initiated. For 70 years — indeed, for a lifetime — the Birnbaum machzor has been a sure-footed guide.

And that’s perhaps another reason why it has lasted as long as it has. When everything around us is changing so rapidly, we often find solace in those things that stay the same. Just as there are certain tunes we associate with the Days of Awe, there are also certain books. For many, the Birnbaum machzor has long been among them.

So this year, I will take comfort in the venerable book whose tearstained pages have weathered tragedy, war and illness as I pray for the people of this fractured world to be inscribed in the Book of Life.