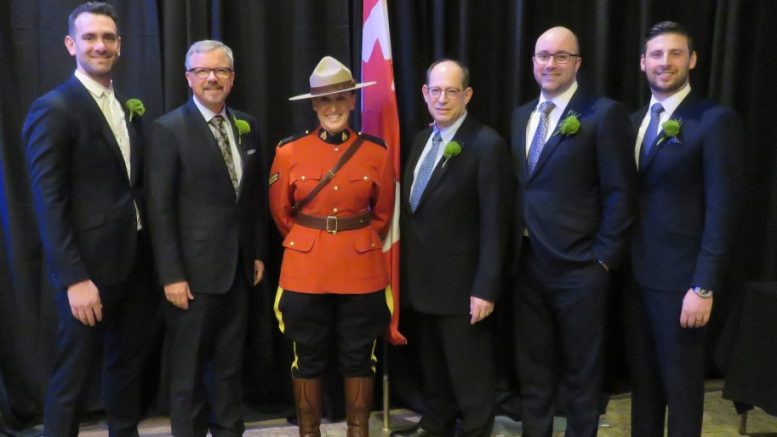 (AJNews) – “Welcome to Brad Wall’s Bar Mitzvah,” Alberta Premier Jason Kenney exclaimed as he greeted the crowd at the 69th B’nai Brith Dinner in Calgary at the end of February. A traditional line no doubt repeated countless times in the Beth Tzedec synagogue, this time it was said in jest and responded to with a chorus of laughter and applause, fitting for what followed, an evening of splendor and philanthropy.

The Premier had the pleasure of introducing the guest of honour for the night’s festivities, and he was the first to bring up a topic that was bubbling just under the surface for many in attendance, and westerners across the land: Will the next title Brad Wall holds be that of Prime Minister? Throughout the evening, Mr. Wall, the former Premier of Saskatchewan, was reminded he still had hours to file his paperwork for the leadership of the Canadian Conservative Party. But, despite praise, and gentle nudges from friends, the answer remained consistent, at this time Brad Wall has no interest in seeking the highest office of the land. 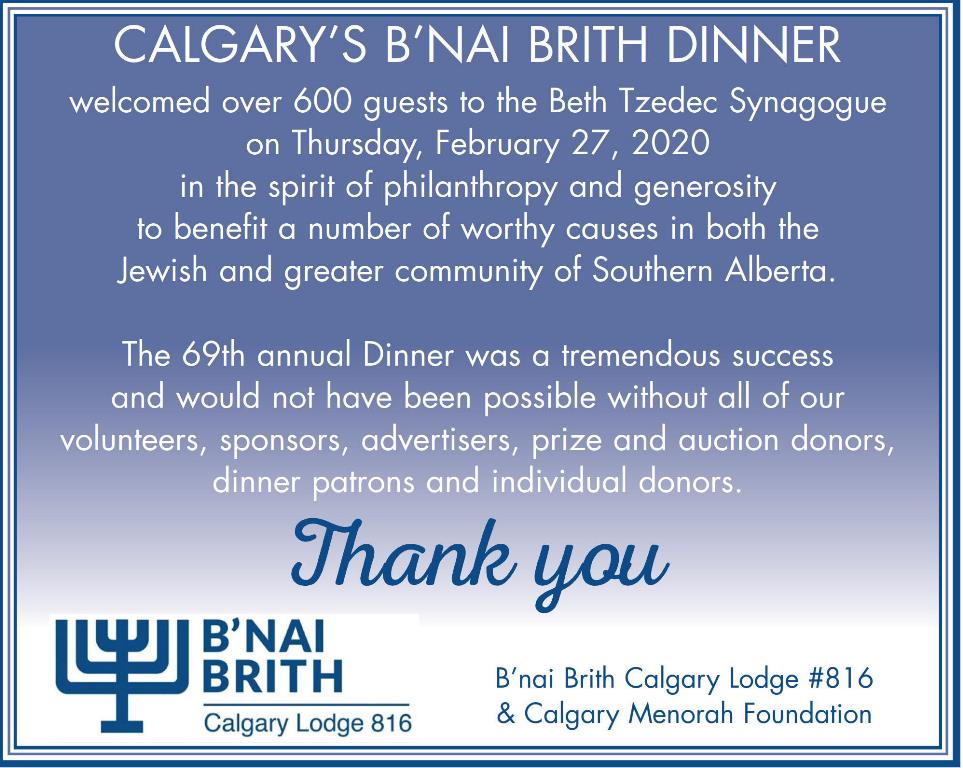 Mr. Wall sat down for a conversation with University of Calgary Chancellor Deborah Yedlin. The two discussed Mr. Wall’s life and times, his connections to Alberta and his opinions and recommendations on current events. Although he was reluctant to give any hard advice to Premier Kenney, or his successor in Saskatchewan, Premier Scott Moe, he did offer his opinion that both conservative stalwarts are heading in the right direction, and as long as they keep the economy on the top of their to-do-list, they can’t go wrong.

Another important aspect of the evening was the presentation of the Ben Docktor Award of Excellence. This year’s recipient was Richard Bronstein who after a lifetime of service in media, culminating in the publishing of the Jewish Free Press for the past 15 years, decided to retire.

In addition to Mr. Wall’s conversation and presentation the focal point of entertainment was the live auction. Rambunctious auctioneers and runners took to the stage to find the highest bidder on some truly wonderful packages leaving all attendees with smiles on their faces.

The evening was a smash success. A highlight was the Co-Chairs of the event having their chance with the microphone. Jordan Balaban, Perry Feldman, and Michael Men thanked the crowd for their attendance, and exuberance and explained the importance that B’nai Brith played in their Jewish lives. For years the three young leaders attended Camp BB Riback in Pine Lake, and participated actively in the B’nai Brith Youth Organization, in which they made life long friendships which continue to this day. Seeing months of hard work and fundraising pay off in such tremendous fashion was awe inspiring, and the three Co-Chairs were quick to offer praise and thanks to Polina Brener, B’nai Brith Calgary Lodge 816 Office Administrator, and Lodge President, Dr. Robert Barsky.

Proceeds from the evening went to support the Calgary Menorah Foundation. For over 100 years Calgary B’nai Brith Lodge 816 and the Menorah Foundation have been pleased to provide financial assistance to numerous community charities. One of the featured charities of the night was Project Cypress, an organization near and dear to Mr. Wall’s heart. Funds from the dinner for Project Cypress were directed to the RCMP Veterans’ Association Foundation which helps ensure our Mounted Police are taken care of during times of need, and that vital information and education is provided to underrepresented communities. 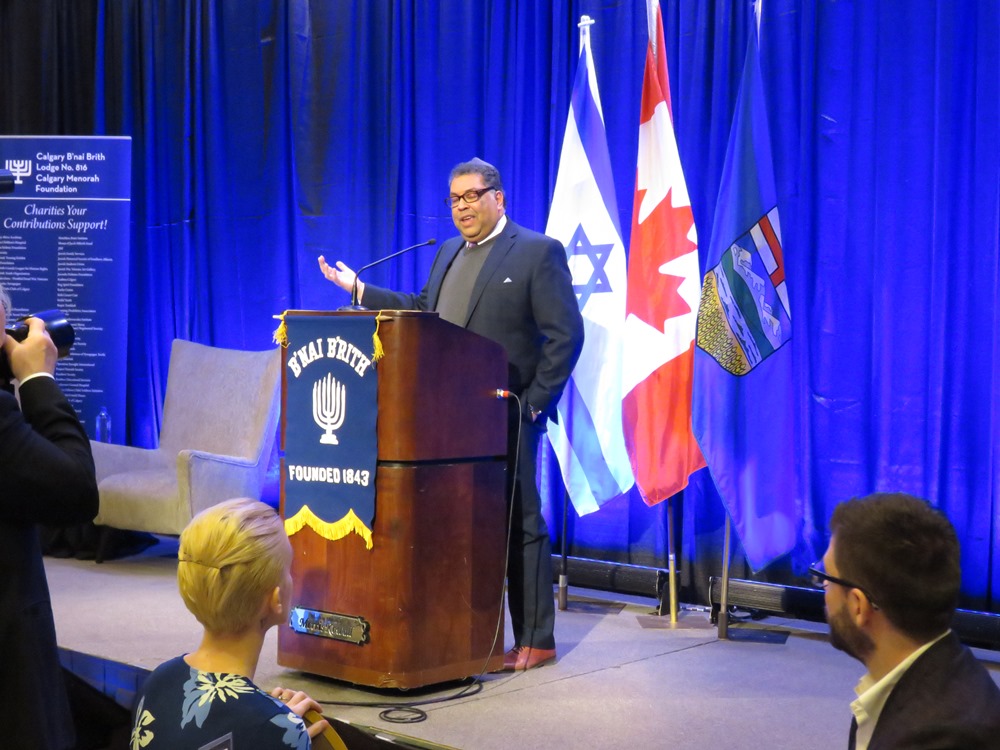 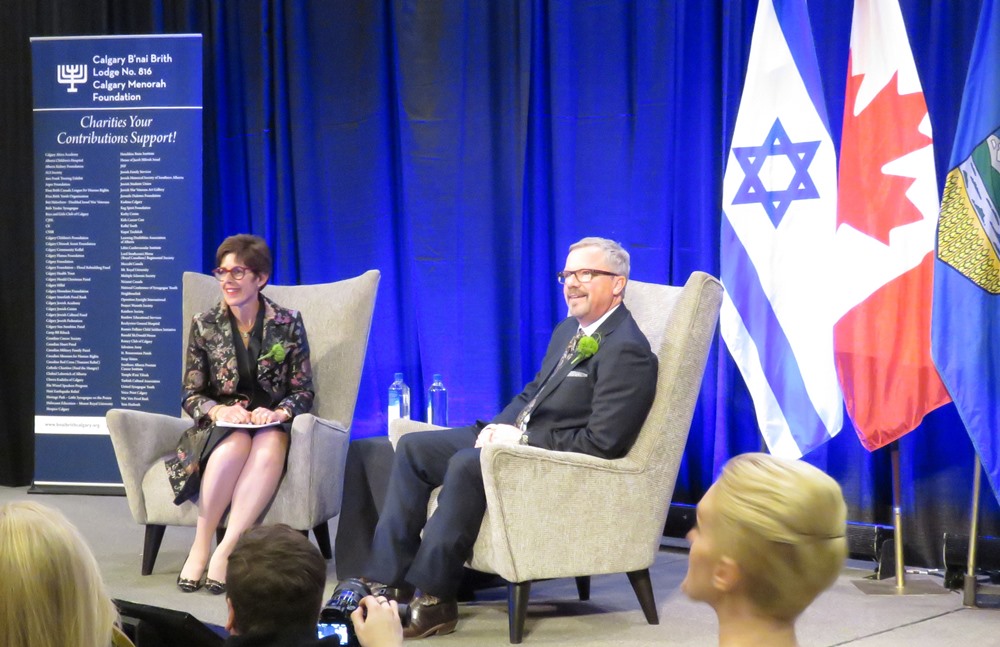 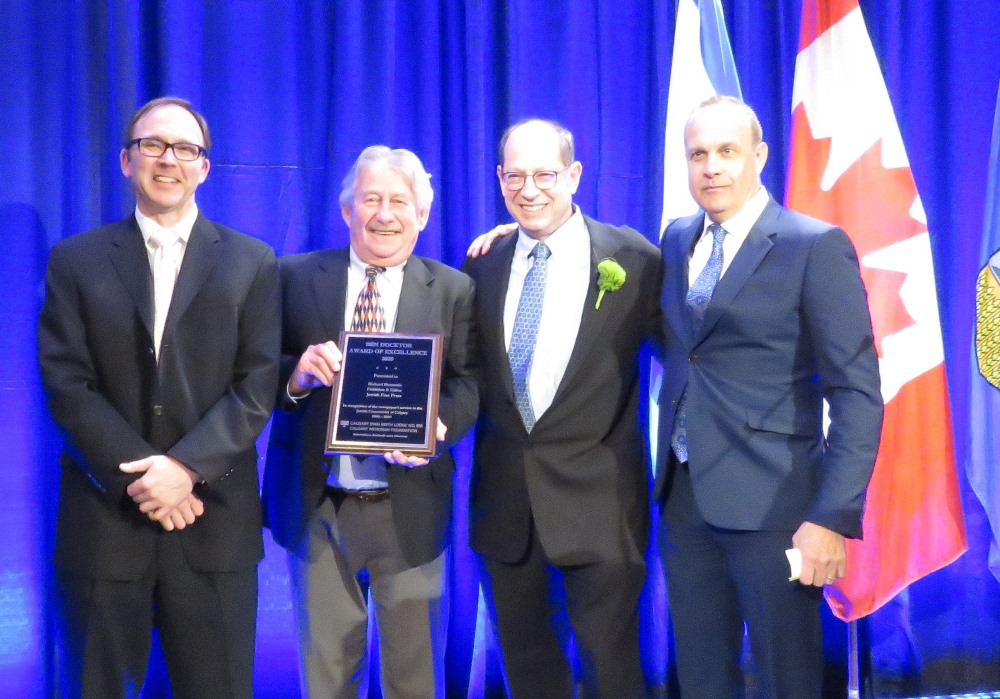 Jewish Free Press publisher Richard Bronstein was honoured to receive the Ben Doktor Award of Excellence for his outstanding service to the community. 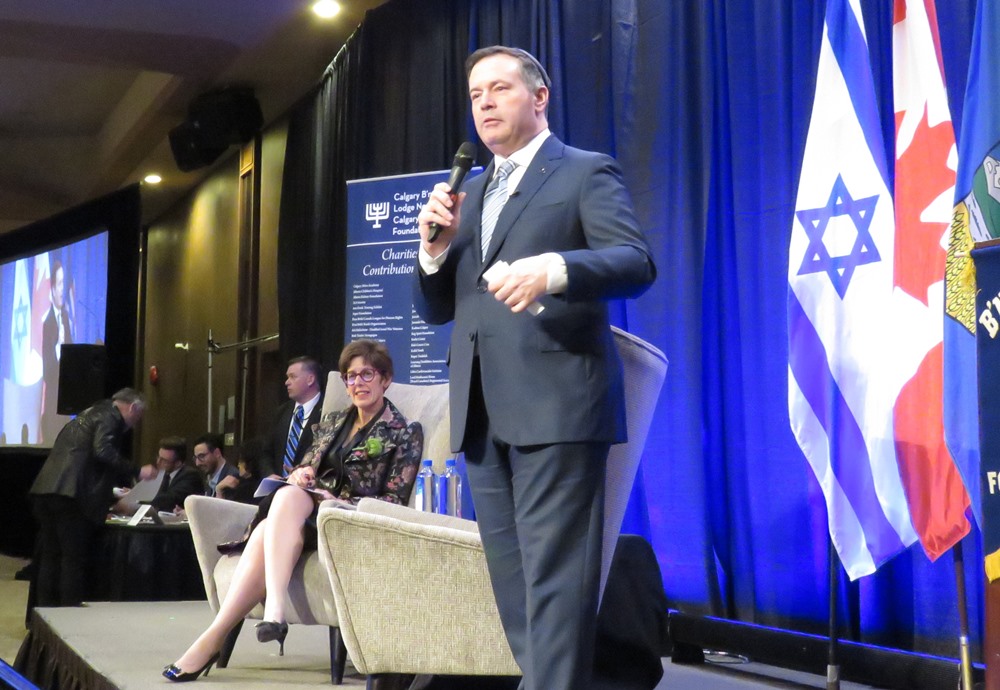