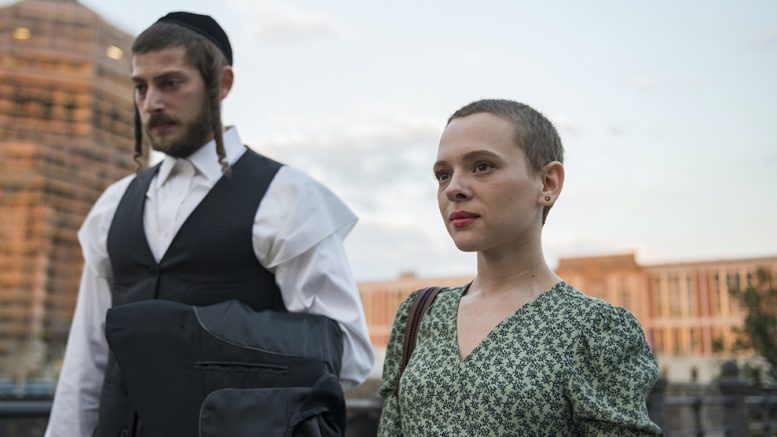 Social distancing and staying inside is hard. Thankfully, accessing good things to watch during this time is not. This is the 16th installation of a weekly column on Jewish movies and TV shows that you should stream in quarantine.

(JTA) — A lot has been written about the hit Netflix series “Unorthodox,” from the show’s lauded portrayal of a young woman’s departure from an Orthodox community to its accurate depictions of haredi garb.

So I eagerly began my binge of the four episodes last week. Friends and family had been urging me to hop on the bandwagon for months.

I had also seen lead actress Shira Haas in supporting roles in multiple other Jewish movies and TV shows — the Holocaust blockbuster “The Zookeeper’s Wife,” Natalie Portman’s adaptation of Amos Oz’s “A Tale of Love and Darkness” and the Israeli show “Shtisel” (also involving the haredi Orthodox) — and I was excited to see her in a high-profile star turn.

But nothing could have prepared me for the visceral brilliance of her performance in this show.

For those who are also late to the phenomenon, here’s a quick plot summary (without any big spoilers): Haas plays Esty Schwartz, a 19-year-old who leaves the haredi Satmar community in Williamsburg, Brooklyn, for Berlin, where her estranged mother — who left the same world when Esty was a child and has agreed to take her in — lives with a female partner.

Through flashbacks, the viewer learns why Esty felt compelled to leave the only world she has ever known: an unhappy marriage to the awkward Yanky Shapiro, an unrelenting pressure to reproduce as quickly as possible, a restrictive culture that does not allow her to play her beloved piano.

The show is broadly influenced by the 2012 memoir of the same name by Deborah Feldman. Some of the details about Feldman’s life are kept, but just about everything else is fiction.

For those who haven’t seen the 25-year-old Israeli Haas before, the first thing that strikes a viewer is her size: one website lists her at 4-foot-9, and she is rail thin. It’s partly a product of treatment for kidney cancer that she contracted at age 2. The chemotherapy stunted her growth.

But her size is a perfect deception — it belies the powerhouse of intensity she brings to every scene.

Several articles mention Haas’ acting in the show’s most pivotal and poignant scenes, such as when she tearfully shaves her head (to ensure that no one can ever see her real hair, which is forbidden in Orthodox law) or takes off her pantyhose and wig publicly for the first time. And yes, she is flawless in those.

But many scenes, especially those set in Brooklyn, involve a lot of difficult silence and rely on Haas’ face to do the emotional work. She conjures an energy so tense that it feels like even her face muscles are held captive in Williamsburg. (It’s worth noting that co-star Amit Rahav, who plays Yanky, also delivers a powerful performance.)

It’s not all silence, though. During her many arguments with Yanky and ventings of her frustrations, veins pop out of her head and neck, and her face flushes red from the intensity. She may be under 5 feet tall, but she can quickly turn into a Jewish Hulk of sorts.

Haas additionally has to embody the sense of wonder and fear that one entering the larger non-Orthodox world for the first time would experience — and at an unrealistically quick pace. Almost immediately upon landing in Berlin, she falls in with a group of friends at a music conservatory near her mother’s apartment, and they take her all over the city — from the beach to a dinner party to a nightclub.

Throughout it all, Haas is able to convey so much through slowly, carefully deliberated words, especially when speaking in English. Yiddish is the primary language in her Brooklyn community.

Unsurprisingly, Haas has been mentioned as a possible Emmy and Golden Globe nominee.

So whether or not you’re familiar with the haredi Orthodox world, or in a position to agree with Esty’s reasons for leaving, “Unorthodox” is well worth the watch — if only to see the birth of a new Jewish star.