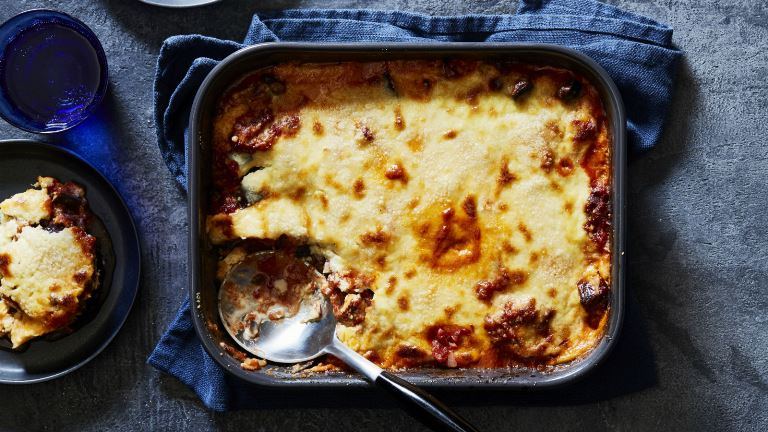 (The Nosher via JTA) –  Greek Jews are no strangers to moussaka, the rich casserole traditionally made from eggplant and lamb and thickly layered with bechamel. But because kosher laws prohibit the consumption of milk and meat together, Jewish versions of the dish tend to either skip the bechamel , which is a shame flavorwise, or make a dairy-free topping from fat, flour and stock.

In this take, the moussaka’s eggplant base is paired with cremini mushrooms instead of lamb, so it’s meat-free and perfectly suited for its creamy topping. Moussaka is warming, hearty and easily transportable, making it the perfect dish for al fresco meals on Sukkot.

Reprinted from “Little Book of Jewish Feasts,” by Leah Koenig, with permission by Chronicle Books, 2018.

1/4 cup extra-virgin olive oil, plus about 3/4 cup for greasing and brushing

4 small eggplants (about 1 pound each), peeled

6 garlic cloves, minced or pushed through a press

For the bechamel sauce:

(Leah Koenig’s writing and recipes have appeared in The New York Times, The Wall Street Journal, Saveur, Epicurious, Food52, BonAppetit.com, Departures, More and Tablet, among other publications. Her most recent cookbook, “Little Book of Jewish Appetizers [Chronicle Books], came out in August 2017. Her previous book, “Modern Jewish Cooking” [Chronicle], was published in 2015 and featured in Food52’s Piglet cookbook tournament.)