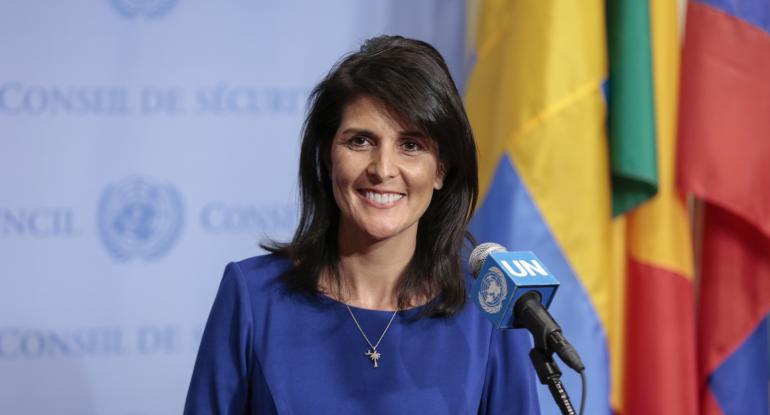 Nikki Haley, Ambassador of the United States to the United Nations Press Conference after her Security Council meeting on the situation in the Middle East, (Rex Features via AP Images)

WASHINGTON (JTA) — U.S. Ambassador Nikki Haley called for a United Nations resolution that would condemn Hamas as a terrorist organization.

Haley delivered her remarks on Tuesday June 20, 2017 at a Security Council meeting on the Middle East, saying Hamas is a danger to both Israel and the Palestinians.

“The Security Council must unite to say that enough is enough,” she said. “We need to pressure Hamas to end its tyranny over the people of Gaza. We should condemn Hamas in this council’s resolutions and statements.”

Haley, who was in Israel and the Palestinian Authority for three days earlier this month, called on the Security Council to re-evaluate its approach to Hamas.

“You can bash Israel. You can bash the Palestinian Authority. And we will get nowhere,” Haley said. “But if you saw what I saw, if you see the terrorist activity that is happening in that area right now, you would understand that every ounce of what we say in this council – pitting the two sides against each other is only strengthening the terrorists.”

Since she was tapped for the U.N. post by President Donald Trump, Haley has been outspoken about the Security Council’s criticism of Israeli practices. Earlier this month, in Geneva, she advocated for the elimination of the U.N. Human Rights Council agenda item mandating a debate over Israel’s human rights abuses of Palestinians in the West Bank and Gaza.

More nations are withdrawing from the discussion. The Jerusalem Post reported that 35 countries spoke at the last debate, but no Western countries participated.