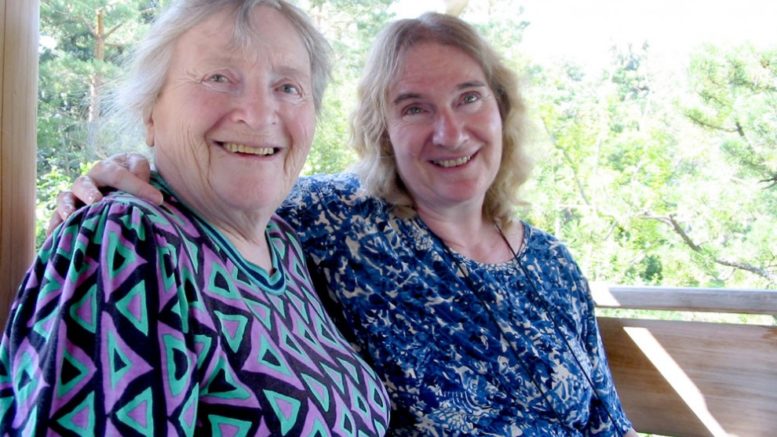 (October 2019) – Dr. Goldie Morgentaler, a professor of English at the University of Lethbridge, will receive a 2019 Canadian Jewish Literary Award for Confessions of a Yiddish Writer and Other Essays.

For the book, Morgentaler translated thirteen essays written in Yiddish by her mother Chava Rosenfarb z”l, one of the most celebrated Yiddish novelists who survived the Holocaust and settled in Montreal. Rosenfarb passed away in 2011.

The essays offer personal accounts of a childhood imbued with Yiddish. They chronicle Chana’s experiences before and during the Holocaust as she strives to preserve the Yiddish literary canon from destruction by the Nazis. Later essays showcase the vibrancy of the post-Holocaust Yiddish literary milieu in Montreal. This collection marks the first time that Rosenfarb’s non-fiction essays have been presented together in English.

“I am extremely honoured to receive this award,” says Morgentaler. “This book was a labour of love and I know my mother would have been delighted to know that her personal essays will live on.”

Confessions is one of eight outstanding books that the Canadian Jewish Literary Awards is honouring for 2019. Now in its fifth year, the CJLA recognizes and rewards the finest Canadian Jewish writing. Winners have been declared in the following categories: fiction, memoir, biography, history, scholarship, Holocaust, Yiddish, and books for children and youth.

“Choosing just eight award winners was a challenge this year,” says Jury chair, Edward Trapunski. “The depth and breadth and quality of the submissions show the vibrancy of the culture and the appeal of Jewish themes for fiction and non-fiction writers.”

The awards ceremony will be held on October 27, 2019 in Toronto.

The other seven honorees are:

Fiction – The Gown: A Novel of the Royal Wedding by Jennifer Robson (HarperCollins) is an enthralling historical novel about one of the most famous wedding dresses of the twentieth century — Princess Elizabeth’s wedding gown — and the embroiderers who made it. Told through the eyes of three women, one of them a Holocaust survivor, The Gown is a story of rebuilding friendship and family after the devastation of the Holocaust. The quality of the submissions in the memoir/biography category was so rich this year that the Jury decided to give two separate awards: one for memoir and one for biography.

Memoir – The Art of Leaving by Israeli Canadian writer, Ayelet Tsabari. (HarperCollins). An intimate collection of essays, the book documents her travels around the world as she searches for her identity. As an Israeli of Yemeni descent in a country sometimes seen as devaluing her cultural traditions, Tsabari searches for a sense of belonging as she drifts from Thailand to India to Vancouver and Toronto before she rediscovers her heritage and embraces her family history.

Biography – Vasily Grossman and the Soviet Century by Alexandra Popoff (Yale University Press) is a well-researched book that introduces, or reintroduces, readers to a significant writer whose stand against totalitarian ideology has taken on new relevance and urgency. Grossman’s epic novel, Life and Fate, was the first Soviet work to equate Nazi Germany and the Soviet Union, pairing Stalinist anti-Semitism with Hitler’s campaign to annihilate the Jews. Popoff grippingly captures the stories behind Grossman’s stories, particularly of censors’ efforts to alter and limit them.

History – With Spies of No Country: Behind Enemy Lines at the Birth of the Israeli Secret Service (Signal/McClelland & Stewart), Canadian Israeli Journalist Matti Friedman introduces us to four unknown, young Mizrahi Jews who became the nucleus of Israel’s nascent intelligence service. The tiny, amateur unit known as the “Arab Section” consisted of Jews from Arab countries who could pass as Arabs thus allowing them to go undercover to gather intelligence and carry out sabotage and commit assassinations. More than a spy story, it sheds light on the complex nature of Israel — a country that many see as European, but where more than half of the population has Middle Eastern and North African roots and relates more to its Middle Eastern neighbours.

Children and Youth – Slavery is a recurring experience in Jewish history. In A Cage Without Bars (Second Story Press), Anne Dublin tells the story of Joseph and his younger sister Gracia who, along with hundreds of Jewish children, are abducted and sold into slavery in 1493 after the Expulsion from Spain. They are shipped to the island of São Tomé, off the west coast of Africa, where they are forced to work on a sugar plantation under brutal conditions. Dublin recounts the horrors faced by these children in a way that is appropriate for her audience of young readers. This coming-of-age tale, filled with adventure, captures a little-known moment in Jewish history and fills a gap in historical fiction for young adults.

Scholarship – Culture in Nazi Germany by Michael Kater (Yale University Press). This book by a Distinguished Research Emeritus of history at York University examines the fate of the arts under Nazi rule. Modernism in music, Expressionism in film, and the Bauhaus in architecture were all manifestations of the arts and culture of Germany’s Weimar Republic before the Nazis came to power. For the Nazis, the arts were only useful as political propaganda. They attacked the artistic movements that they felt were dominated by the Jews and leftist groups. Kater’s book examines how cultural life, including architecture, journalism, film, music, opera, theatre, and the visual arts became the means to control the minds of the people, and the fate of the Jewish artists caught up in the social madness.

Holocaust – Choices Under Duress of the Holocaust: Benjamin Murmelstein and the Fate of Viennese Jewry Volume I: Vienna (Texas Tech University Press). A culmination of more than three decades of research by Leonard and Edith Ehrlich, and edited by their son, Carl S. Ehrlich, Director of the Koschitzky Centre for Jewish Studies at York University, it chronicles the harrowing decisions Jewish communal leaders in Austria were forced to make while under Nazi occupation. It examines the decision-making process from both a historical and a philosophical 4 perspective and investigates the actions of the controversial Rabbi Dr. Benjamin Murmelstein, who was leader of the Jewish community of Vienna between 1938 and 1942 and later Judenältester (Chief Jewish Elder) of Theresienstadt concentration camp-ghetto.

The Canadian Jewish Literary Awards is hosted and sponsored by the Israel and Golda Koschitzky Centre for Jewish Studies at York University. For more information visit cjlaawards.ca.