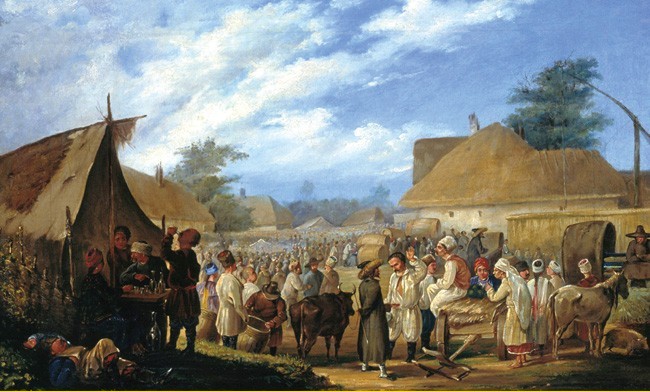 A Journey through the Ukrainian-Jewish Encounter will be on exhibit in Edmonton from Aug 4 - 18 at St. John's Institute at 11024 Whyte Ave. The launch is Aug. 4 at 7:30 pm and includes live music and kosher snacks.

The territory of modern-day Ukraine has been the homeland of diverse and flourishing cultures, including one of the most populous Jewish communities in Europe, whose presence on Ukrainian lands dates from 2,000 years ago. The vast majority of Ashkenazi Jews today have their origins in Ukrainian lands.

The blended Ukrainian-Jewish story, up to the end of Tsarist Russian rule and Habsburg Austro-Hungary, will be of particular interest for both Ukrainian and Jewish audiences, but also for a wider Canadian public, offering diverse perspectives on a shared history.

Created by UJE and co-funded by Citizenship and Immigration Canada, this multi-media exhibition consists of narrative, images, music, and continuously running videos. It offers an integrated account of the historical experience of Ukrainians and Jews, in all its complexities- under ever-changing political regimes, as two stateless peoples, side by side, over long periods of normal co-existence conducive to the creation of enduring cultures and cross-cultural influences, and during intermittent episodes of crisis and violence.

The exhibition consists of 36 panels displaying thematic texts accompanied by maps, graphics, paintings, photographs, and other images, as well as continually-playing short videos that highlight such themes as sites of the encounter (inns, taverns and marketplaces), cross-cultural influences in music and folk art, the role of artisans, and scenes of daily Jewish and Ukrainian life. Compelling period photographs accompanied by evocative music, including music recorded over one hundred years ago on wax cylinders during the 1912-14 ethnographic expeditions in the Jewish Pale of Settlement (led by S. An-sky, author of The Dybbuk), are featured in the videos.

The display panels guide the visitor through two thousand years of history, exploring such themes as the implications of the role of Jews as economic intermediaries between the largely Catholic noble estate owners and the largely Orthodox peasant serfs; divided historical memories regarding Cossack uprisings against Polish rule in the seventeenth and eighteenth centuries; the origins and extraordinary advance of Hasidism on the territory of Ukraine; the flourishing Hebrew/Yiddish publishing scene and literary renaissance; perceptions of Jews among Ukrainian literary figures and leaders of the Ukrainian national awakening and the depiction of Ukrainians in Jewish literature.

Rodel notes that there is much to be learned from the fresh approach taken in the exhibition, featuring an integrated narrative of these two peoples. The exhibition treats their historical experience together, in all its complexity – during periods of crisis and intermittent violence, as well as long periods of normal neighbourly co-existence, conducive to creating and sharing enduring cultures.

This approach may offer a model for addressing divided memories and entrenched stereotypes by the incorporation of differing perspectives on contested issues, taking into account the broader context and impact of changing regimes and empires, and distilling germane information in an accessible visual format.

The Ukrainian Jewish Encounter (UJE) is a privately organized multinational initiative launched in 2008 by a group of individuals from Canada, the United States, Ukraine, and Israel. Its work engages scholars, civic leaders, artists, governments and the broader public in an effort to promote deeper mutual comprehension and solidarity between the two peoples.

Be the first to comment on "Ukrainian Jewish Encounter Exhibition comes to Edmonton: August 4 – 18"