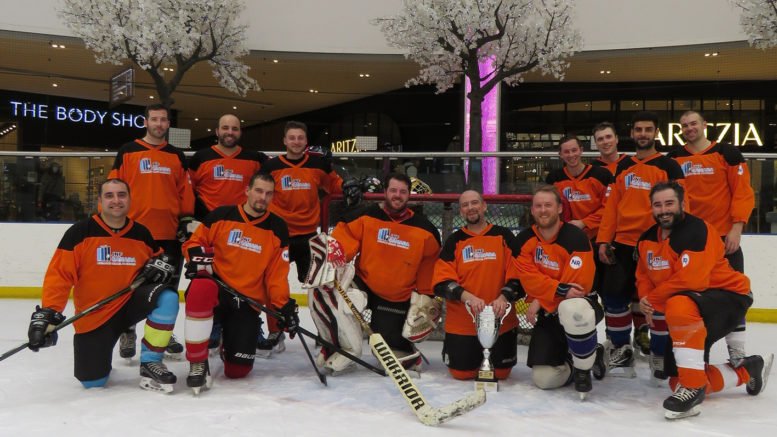 (AJNews) – The 2022 JNF Alberta Cup Hockey Tournament hit the ice on February 26 & 27 at the West Edmonton Mall Ice Palace, with four teams competing for the coveted cup. Yasher Koach to JNF Edmonton Director Jay Cairns for hosting this amazing event and to all the players, and sponsors who helped make it a success. Mazal tov to the Tu Bi’ Shevat Tigers for winning the tournament. 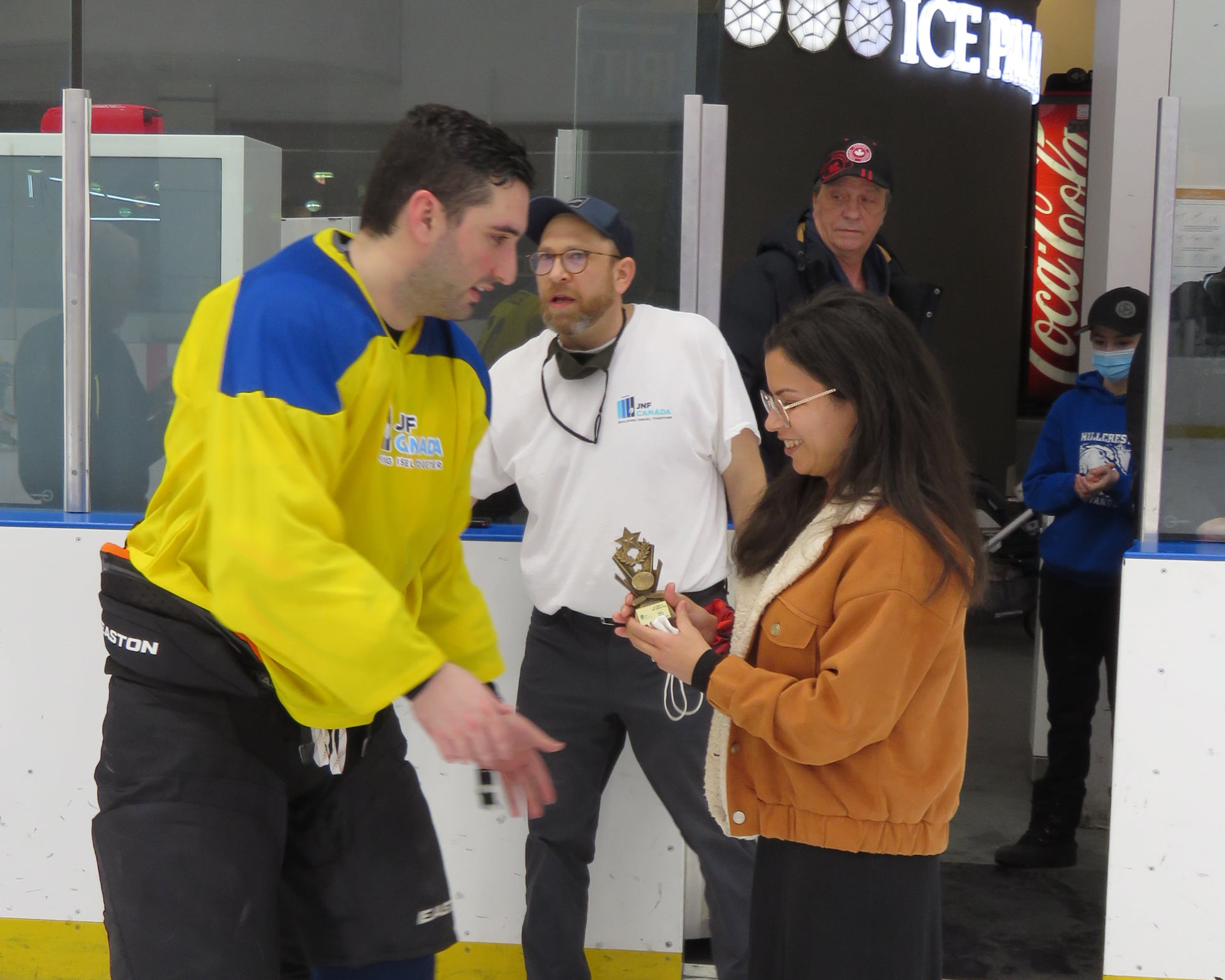 “The 2022 JNF Alberta Cup was a sign that more good things are coming!” remarked Cairns. “After a long pause on gatherings, it was a pleasure to host such a great event with such a positive group of people. It’s more than just a hockey tournament when you see the people and the relationships that deeply connect. It’s such a warm atmosphere of friendship – whether you saw each other yesterday, last year or several years ago.”

The tournament has become a favourite event pitting the competitive hockey prowess of Edmonton vs Calgary and Edmonton vs Edmonton – the camaraderie of friends, families and colleagues gathering for some good fun. Team names like Fighting Yids, Chai Shticks, Charlestown Ribacks and Tu Bi’ Shevat Tigers show that in addition to great hockey, there is good humour.

The action started on Saturday night Feb. 26 at 8:30 pm and picked up again at 8 am on Sunday morning Feb. 27. Each game was one hour in duration and each team played at least three times. The first and second place teams – Fighting Yids and the Tu Bi’ Shevat Tigers then played off for the championship – with the Tigers winning the game and the cup. Both teams that reached the final were wearing patches to commemorate their recently passed friend and teammate Nathan Reboh z’l.

This is the fourth year that the JNF Alberta Cup has been held and each time, the team spirit and friendships among the players is heartwarming. For this reason, it’s become important to Cairns that the tournament be a time to recognize and remember beloved community members who enjoyed sports, demonstrated exemplary menschlichkeit and passed away too soon.  Following the final game, in addition to the Alberta Cup, an award ceremony featured special trophies honouring the memories of two stellar young men who had an impact on our community: Nathan Reboh z’l and Stevie Schwartzberg z’l. 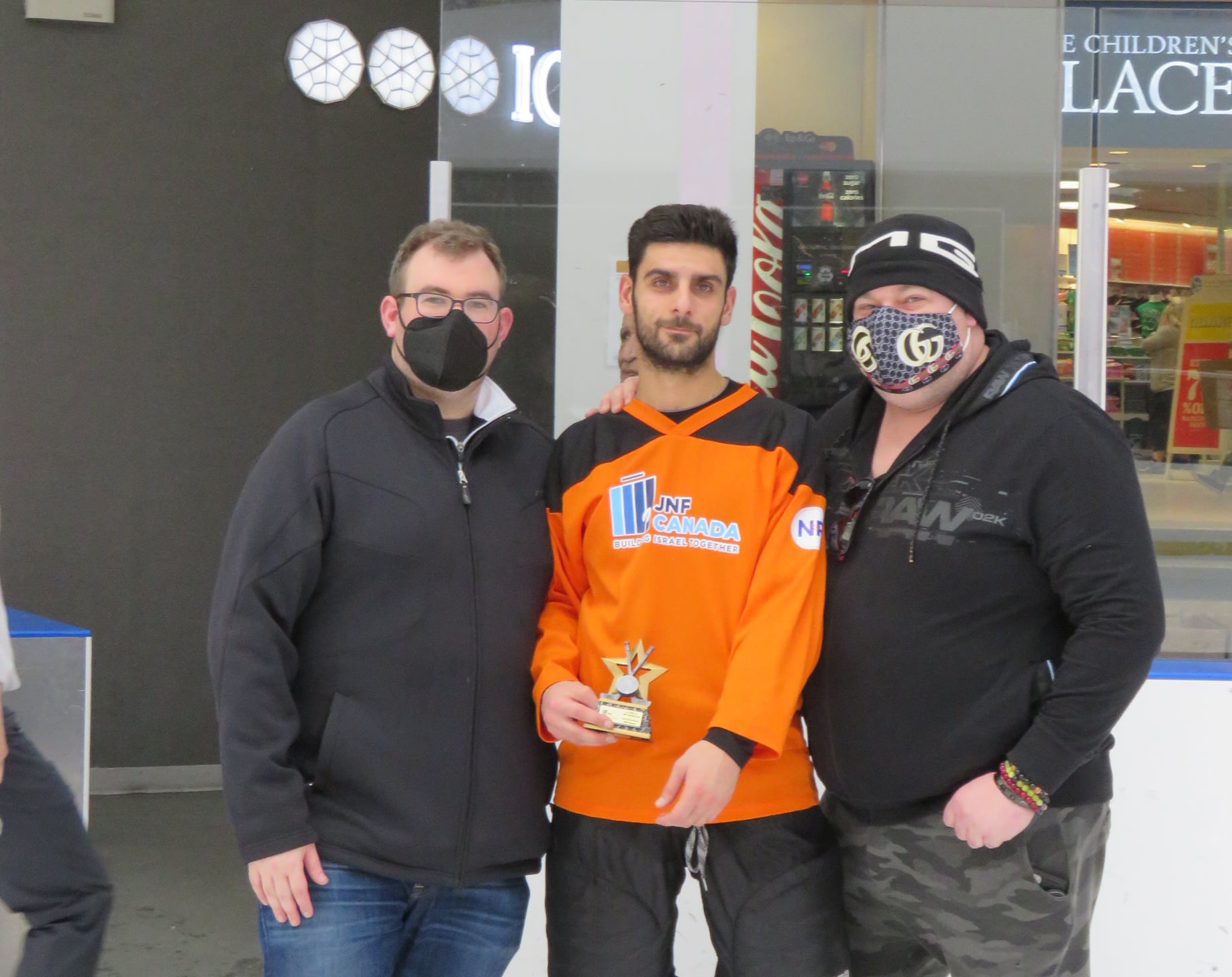 “The tournament has become an opportunity to honour and remember these two outstanding community members who are gone, but not forgotten and their legacy lives on through their friends, families and the JNF Alberta Cup,” said Cairns.

Presenting sponsor Barry Slawsky and his son James dropped the puck for the final game and presented the Alberta Cup to Lee Tappenden, captain of Tu B’Shevat Tigers.

One of the highlights of the event was the free skate with BBYO leadership, Regional Director Stacy Shaikin, City Supervisor Eliyanna Forbes and BBYOers. They were joined by family and friends of the players for a delightful hour of recreational skating at the Ice Palace.

JNF is very appreciative of the generous contributions of the event sponsors and everyone else who contributed to the success of the 2022 JNF Alberta Cup, said Cairns. 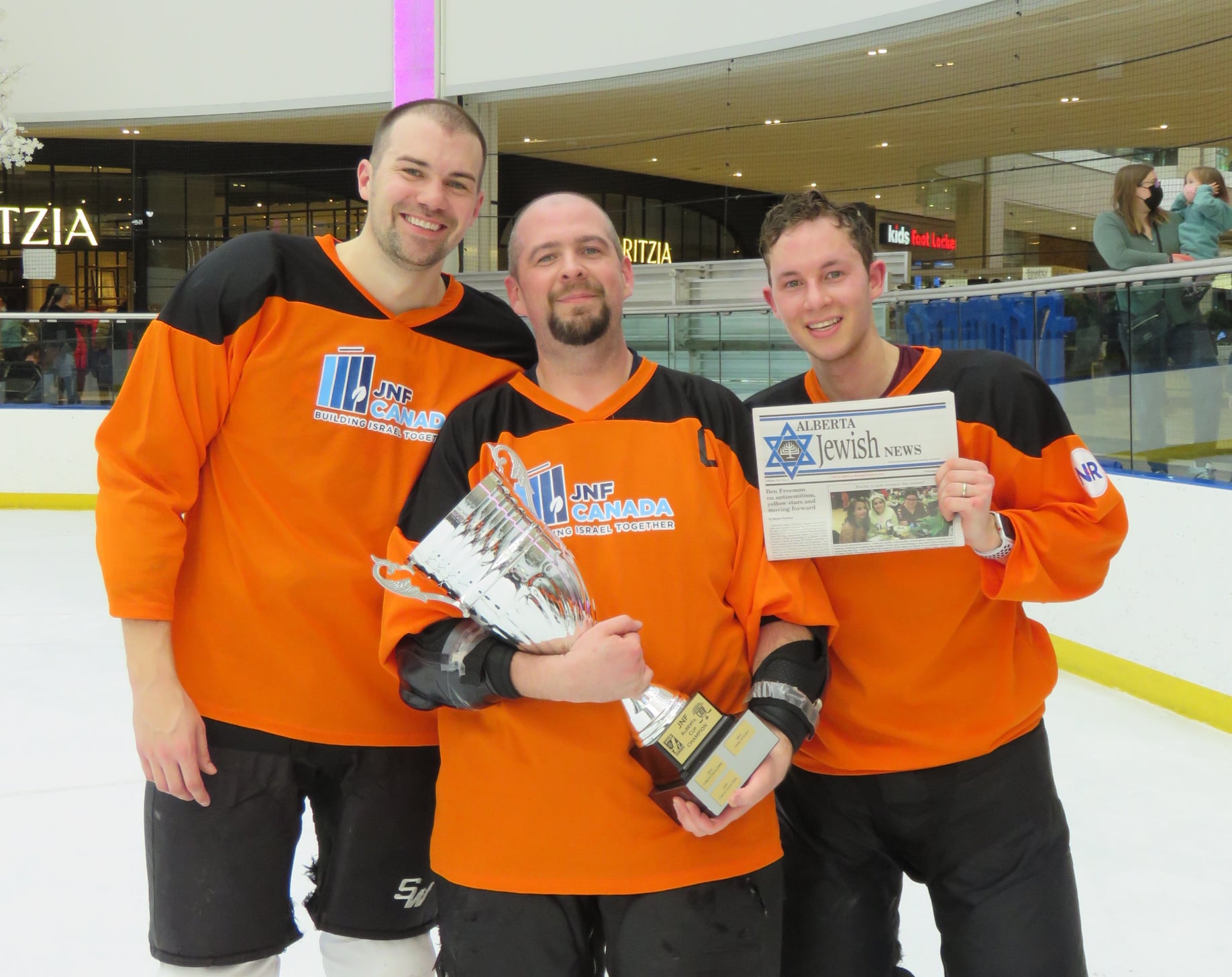 “Congratulations to the Tu Bi ’Shevat Tigers,” added Cairns, “ and speaking of Tu Bi ‘Shevat, if you have not yet made your donation to the Jerusalem Hills rehabilitation, click here! https://jnf.ca/the-jerusalem-hills-rehabilitation/

Click here for the our photo gallery of the free skate, and the award ceremony from the JNF Alberta Cup Hockey Tournament. 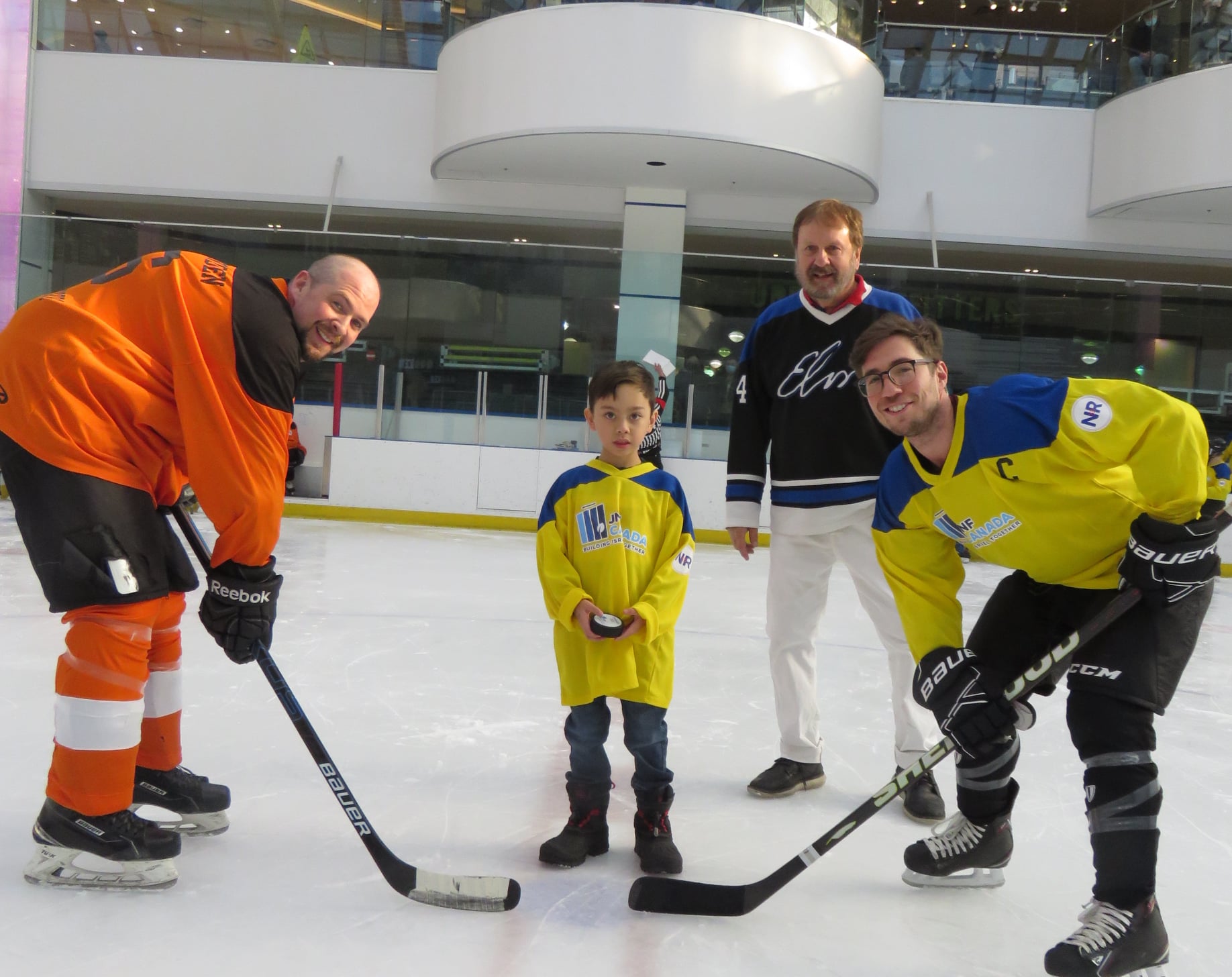 Presenting sponsor Barry Slawsky and his son James drop the puck for the championship game of the JNF Alberta Cup Hockey Tournament. 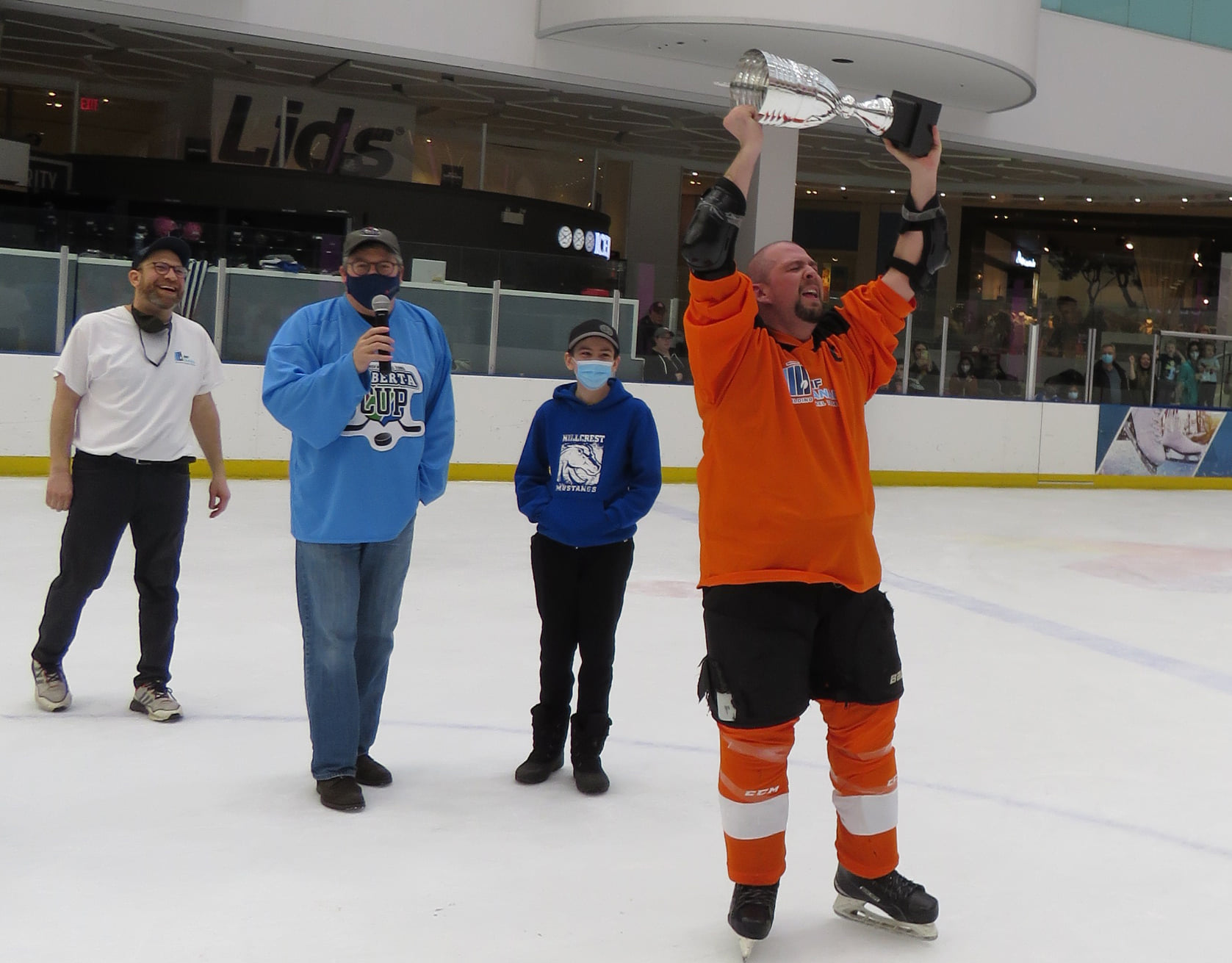