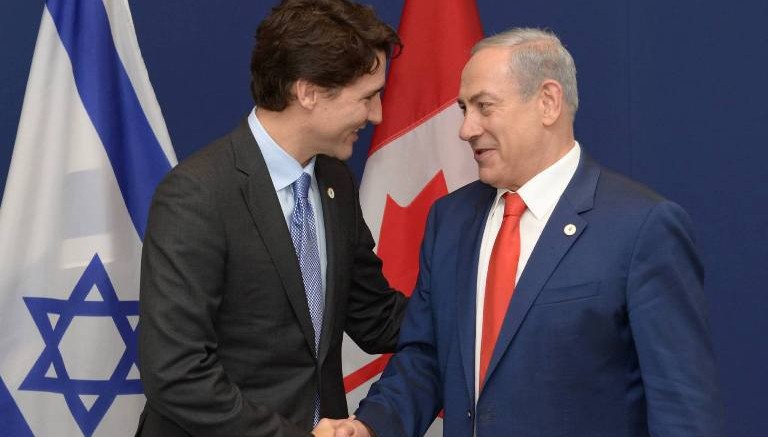 Prime Minister Justin Trudeau and Israeli Prime Minister Benjamin Netanyahu met for the first time on November 39 near Paris where both are attending the United Nations climate change conference.

“I’m delighted to see Prime Minister Trudeau. We’ve had a chance to speak on the telephone. Canada and Israel have had superb relations, and there’s a foundation there to make these relations even stronger. Very practical things are of interest to both our peoples, and I look forward to having that conversation with you. I am inviting you to Israel at your earliest opportunity,” said Netanyahu at the brief meeting.

Trudeau responded: “It would be a pleasure to return to Israel when it works out. In general this is really about starting a conversation to continue the very strong friendship and relationship between Canada and Israel. We have many issues to talk about and discuss, but also many issues to collaborate on and I look forward to continuing the strong friendship that Canada has shown towards Israel for decades.”

He said, “Mr. President. It’s good to see you again. This is our second meeting after our meeting in Moscow, and we also use the telephone to communicate.

“I think that, as you say, the events of recent days prove the importance of our coordination, our de-confliction mechanisms, our attempts to cooperate with each other to prevent unnecessary accidents and tragedies and I believe that we’ve been successful. It’s important.

“Secondly, I think we are engaged in a big battle against militant Islam, the terrorism it spews forward, the savagery, the barbarism. And this is another point of contact in addition to many others that we’re engaged in.

“I hope that Israel and Russia can see eye to eye on all the strategic matters, but I want to assure you that we believe that it’s within our powers to have very good coordination on the ground and in the air so that we do not create the kind of problems that we’ve been experiencing.

“I’m very satisfied by the fact that our militaries have been very careful to coordinate with one another and will continue to do so. I think this is an indication of the openness and the success of the relationship between Israel and Russia, our relationship. It’s good to see you again.”

Russian President Putin replied,  “Distinguished Prime Minister, it’s my pleasure to have a meeting with you on the sidelines of today’s event.

“I remember our detailed talk when you visited me in Moscow.

“Very many dramatic developments, including dramatic ones have been happening globally. But let me start with congratulations on the coming Chanukah holiday. It’s a very good and bright holiday that symbolizes the victory, the triumph of light over dark. And I really hope that in international affairs we’ll have it this way as well.

“We are satisfied with the progress of bilateral relations. And let me note that the mechanism that has been promoted by you and proposed by you presupposes contacts between the militaries to prevent incidents due to the dramatic developments in the region has been efficient. And we also have advances in other spheres as well.”

Be the first to comment on "Trudeau and Netanyahu meet for the first time in Paris, also Putin"