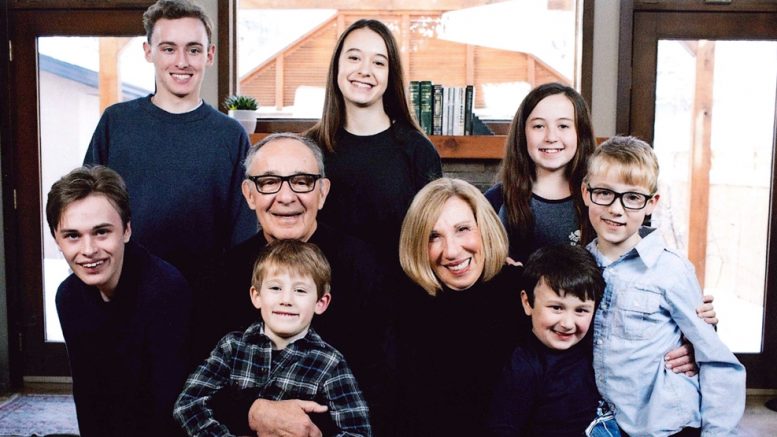 Together with a growing number of LIFE & LEGACY Donors, Cheryl and Morley Shore – pictured here with their grandchildren – are investing in the future of Jewish Calgary through their after-lifetime gift.

(Calgary) – When Joey Tappenden first heard about Harold Grinspoon Foundation’s LIFE & LEGACY program, he was intrigued, both as a Jewish professional and as an individual who is personally passionate about the future of Jewish life.

A relative newcomer to Calgary, Tappenden, a former Edmontonian who is the Director of Marketing and Advancement at The Calgary Jewish Academy, was eager to bring his organization to the table and to become a philanthropist in his own right – at the relatively young age of 31 – through a Letter of Intent supporting CJA and two other beneficiaries with an after-lifetime gift.

The Calgary Jewish Academy is one of ten local Jewish organizations that eagerly stepped up to participate in the four-year LIFE & LEGACY program, launched locally in February 2019, to ensure the future vibrancy and economic viability of Jewish Calgary through endowment gifts.  Donors of all ages and economic means are encouraged to consider the community institutions and causes that mean the most to them and to provide for them in perpetuity through wills, trusts, retirement funds and life insurance policies.

Together, these institutions and a growing number of local philanthropists are engaging in a proven community-building initiative that is backed by training, support and cash incentives from the Harold Grinspoon Foundation, also well-known for PJ Library, an internationally acclaimed Jewish literacy success story.

Calgary was the first Canadian community to adopt the LIFE & LEGACY program and has since been joined by Montreal, Ottawa and Toronto.

According to figures released through September 2019, since the launch of LIFE & LEGACY in 2010, the Grinspoon Foundation has helped 630 Jewish organizations in 63 communities secure more than 25,000 after-lifetime gifts with an astonishing combined estimated value of just under $1 billion in legacy gifts.

Early local results are remarkable and bode well for the future of Jewish Calgary.  Ten months since our community’s LIFE & LEGACY launch, more than 71 Calgary donors have stepped up with over 238 gifts representing a combined value of just over $11 million.

Joey Tappenden already believed in the power of formal and informal Jewish education when he moved to Calgary two years ago. A graduate of the Edmonton Talmud Torah and a former Camp BB – Riback camper and staffer, he was raised with benefits he is already paying forward as he lays down some roots in Calgary.

As an initial investment in his own future, Tappenden’s Letter of Intent designated The Calgary Jewish Academy, Camp BB-Riback and Beth Tzedec Congregation as recipients of his after-lifetime gift.

“I chose these organizations because I believe in their causes,” Tappenden says.

“Even in the short time I’ve been in Calgary, they’ve shown me that this is a worthwhile investment.  They’ve certainly earned it.”

Tappenden – who met his wife-to-be, Mira Feldman, at Camp BB – made a point of investing in the organizations the young couple plans to take part in as they grow their own family.

“I am young and new to the community, but I’m not the only one who is committed to this initiative.  There are others stepping up in their 30s and 40s.  They are thrilled they can make an impact with no money down,” adds Tappenden.

As a key member of The Calgary Jewish Academy’s LIFE & LEGACY team, Tappenden is impressed with the power of LIFE & LEGACY to change the way the community looks at fundraising.

“While you are making your commitment to participating organizations, there is also the opportunity to gift other Jewish and secular causes.  It allows anybody to be philanthropic on a whole new level.  We all want the organizations that matter most to us to succeed.”

That is a sentiment shared by former Vancouverites Barb and Ron Krell, retirees who raised their family in Calgary and are looking forward to the birth of their second grandchild.

“It is about giving now and in the future,” says Barb Krell.  Our LIFE & LEGACY gift doesn’t take away from the annual giving we are committed to today.”

“We’ve come to the realization that many local organizations are struggling to make ends meet.  Endowments seem to be the answer going forward.  If enough people give endowments over time, it will assure ongoing resources for our community,” adds Ron.

Barb Krell found it reassuring to sign a LIFE & LEGACY Letter of Intent knowing that it is a coordinated effort by many of Jewish Calgary’s bedrock organizations, those primary institutions needed for a vibrant Jewish community.

“The funds are managed and maximized through the agreement we make with JCFC,” adds Barb.  “We know it will be managed well into the future.”

The Krells appreciate that LIFE & LEGACY – and JCFC endowments in general – provide a tax-effective way of giving.

“It allows us to leverage and direct our resources for charitable gifts.  By working together, we will all achieve more,” says Barb.

The organizations named by the Krells in their LIFE & LEGACY Letter of Intent include Beth Tzedec Congregation, Jewish Historical Society of Southern Alberta, Calgary JCC, The Calgary Jewish Academy and Calgary Jewish Federation, the latter in support of Holocaust Education, which is fitting given that Barb and Ron are two of the original founders of the Federation-sponsored Annual Holocaust Symposium.

While there are many other Jewish organizations the Krells support with annual gifts, they were strategic in their choice of after-lifetime beneficiaries, favouring local organizations in which their family has been active and which, by definition, have a more limited base of potential donors than national and international agencies and causes.

Ron says that grandparenthood has helped to focus them in a forward-thinking way.

“You start to realize how important it is for organizations to have stability and to continue doing what they do for the community.”

“We want to make sure these organizations will be there for our children and grandchildren in whatever future form they take,” adds Barb.

Denver-based Tammy Dollin, the Grinspoon Foundation Legacy Consultant who has been guiding the Calgary LIFE & LEGACY team, is effusive in her praise of this community’s early successes which includes meeting and exceeding the goal of 180 Letters of Intent in under a year.  As we went to press, the Calgary tally was an impressive 238.

“I love the way Calgary has come into it,” said Dollin during a recent visit to Calgary.  “From the beginning, it’s been a wonderful synergy between the Jewish Community Foundation of Calgary and Calgary Jewish Federation.  You don’t see that everywhere, but you sure do in Calgary.”

Dollin is impressed by the JCFC’s Legacy Calculator, an online tool that allows donors and potential donors to calculate and optimize charitable gifts.

While democratizing the culture of giving, LIFE & LEGACY delivers a program that, first and foremost, focuses on the hopes and dreams of donors.

“The whole community comes together to tell donors that we want them to give to the places they care about,” said Dollin.

It is a sentiment echoed by Diana Kalef, Director of Development, Calgary Jewish Federation. In addition to staffing the local LIFE & LEGACY initiative, Kalef and her husband, Elliott Steinberg, are also proud donors.

“LIFE & LEGACY is providing us with the tools to build upon and deepen a culture of giving that has always been a part of our community,” says Kalef.  “While many members of our community are generous when it comes to annual gifts, it has become clearer over time that our future sustainability will depend more than ever on endowment gifts.  After-lifetime donations allow more individuals and families to give gifts to the community that last forever.  The donors I speak with are excited to be a part of that, and so are we.”

“Donors are so impressed by the potential of LIFE & LEGACY that many of them aren’t even waiting for us to contact them,” says JCFC Chair Stuart Myron.

“They are coming to us to discuss how their hopes and dreams for the future can be realized through their own after-lifetime commitments.  It is an exciting two-way street with multiple lanes that, over time, will transport our community toward a vibrant and viable shared future.”

“Thanks to those who are making legacy commitments, we are closing the gap between meeting day-to-day communal needs and fulfilling our individual and collective desires for Jewish Calgary’s future.  Like other LIFE & LEGACY Donors, my wife Deb and I want to ensure that the important things we are doing today to build a strong Jewish Calgary will continue for generations to come.”

For more information on LIFE & LEGACY in Calgary, go to  www.jewishcalgary.org/life-and-legacy or http://www.jcfc.ca/resources/life-legacy/.  To see how you can maximize your charitable giving, go to the JCFC website at www.jcfc.ca and click on the Legacy Calculator tab.    If you would like to plan your own LIFE & LEGACY after-lifetime gift, please contact Diana Kalef at 403-444-3154.

(Maxine Fischbein is a freelance writer who proudly supports the future of Jewish Calgary through LIFE & LEGACY.)

Be the first to comment on "To LIfe & Legacy: Early successes bode well for Jewish Calgary’s future"