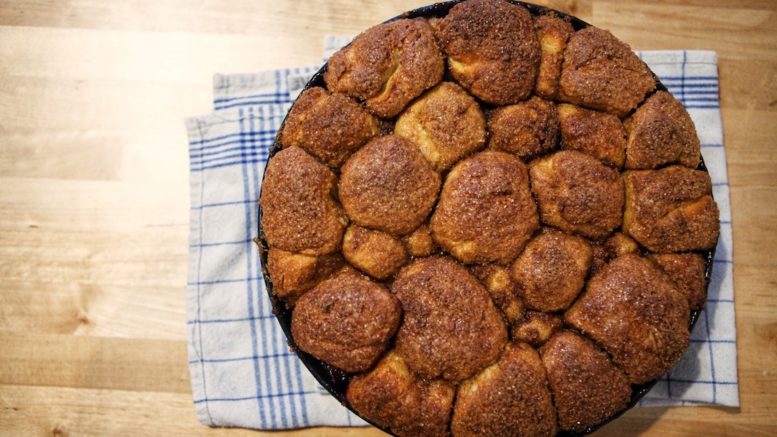 (JTA via Keller) – One morning, my wife suggested I look into making a different kind of bread. Not necessarily to replace my weekly challah habit, but just to try something new. I asked what she had in mind and she mentioned monkey bread. I’d never heard of it.

So I Googled and turns out that monkey bread is actually a yeasted cake. Its origins are rooted in the immigrant Hungarian Jewish community that came to the United States. I immediately thought of my father’s grandparents, Jews who immigrated from the former Austro-Hungarian Empire. I texted my father and sure enough he remembered his grandmother, Bertha Stern, making him what she called Hungarian coffee cake, but what many call aranygaluska.

Aranygaluska looks something like a Bundt cake without the doughnut hole and the splash of powdered sugar. That’s because the goodness lies within, where the warm, gooey jam awaits between doughy dumplings covered in butter, cinnamon and brown sugar. Aranygaluska has all the characteristics of a dessert but can just as easily go down with your morning cup of coffee.

Jewish food historian Gil Marks included aranygaluska in his Encyclopedia of Jewish Food, noting the arrival of the “golden dumpling” in the 1880s. Hungarian Jewish immigrants started selling it in their bakeries sometime in the mid-20th century, and it transcended Jewish foods when it was included in a 1972 edition of Betty Crocker, referred to as “Hungarian Coffee Cake,” as my great-grandmother called it.

Eventually it became known as monkey bread. There’s no definitive reason why, but one of the more popular theories is that the act of pulling the bread apart mimicked how a monkey picks something apart.

Joan Nathan, the matriarch of American Ashkenazi cuisine, says she first came across the recipe in George Lang’s “The Cuisine of Hungary” (1971). She also notes that replacing the walnuts with cocoa turns the dish into the wonderfully Yiddish kuchem-buchem.

I admittedly was a bit verklempt when I realized I had stumbled upon a heritage food, especially one laced with two of my favorite ingredients, cinnamon and honey.

This is great for an inexperienced baker because it’s a difficult recipe to screw up. As you get your dough together, it just involves taking pieces of that dough, swooshing them around in bowls of butter and cinnamon sugar, then arranging the chunks of sweetness in layers. Fill the gaps with jam and you’re set. 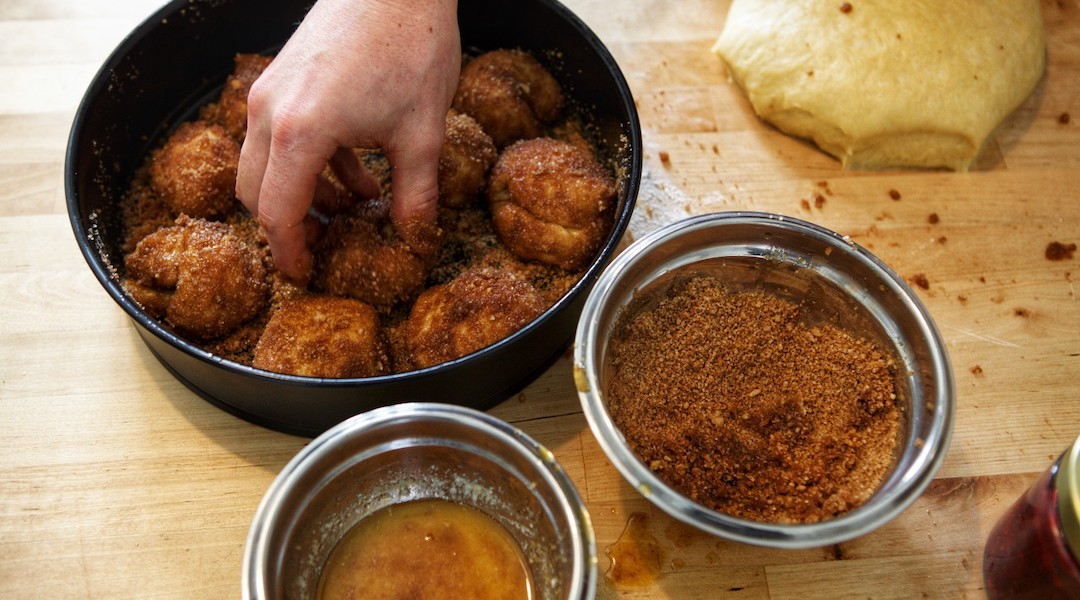 1. Put your yeast in a small bowl with 1 tsp sugar. Pour in a cup of warm milk or water and whisk together. Let it sit for the next 5-10 minutes until it foams.

2. In a large bowl or mixing bowl if you’ll be using a stand mixer, whisk together your eggs, salt, sugar, honey and melted butter. (Make sure your melted butter has cooled to at least room temperature before mixing it with the eggs.)

3. Once your yeast is activated (foamy), dump it into your mixing bowl and start working in your flour. Continue adding your flour in stages until a ball starts to form. Then, drop the dough onto a floured surface and knead for about 10 minutes. Place your kneaded dough into a lightly oiled pot and leave it in a warm environment to rise for the next 60-90 minutes.

4. Meanwhile, start making your topping. Throw the walnuts into a food processor and run it until very fine. Mix that with your brown sugar, cinnamon and pinch of salt. Melt a stick or ½ cup butter into a second bowl.

5. Take some of your melted butter and grease your pan. Then, generously layer the bottom with your cinnamon-sugar-walnut-mix.

6. Once your dough has risen, preheat your oven to 360 F. Punch the dough out onto your working surface. At this point, there are two methods to make your dumplings. You can either roll out the dough until it’s about a ½-inch thick or eyeball it. I’m on team “eyeball it” and use my dough cutter to cut off golf ball-sized dumplings. However you do it, roll your dumpling into a ball and drop it into your bowl of melted butter. Then drop your butter-coated dumpling into your cinnamon-sugar-walnut mix, covering it on all sides. Place the dumpling into your pan and repeat, leaving a little space between each one.

7. After you complete the bottom layer, place a dollop of jam on each dumpling. Don’t overdo it with the jam or it’ll seep out of the sides of your springform pan, burn in the bottom of your oven and ooze out when you remove the spring.

8. Using a 9-inch pan, you’ll only have two layers of dumplings. After you complete your second layer, coat the dish with whatever butter you have left followed by the rest of your topping mix. Throw it immediately into the oven for 35-40 minutes until golden.

9. Remove the aranygaluska from the oven and let it cool off for a good 15 minutes before removing the ring.