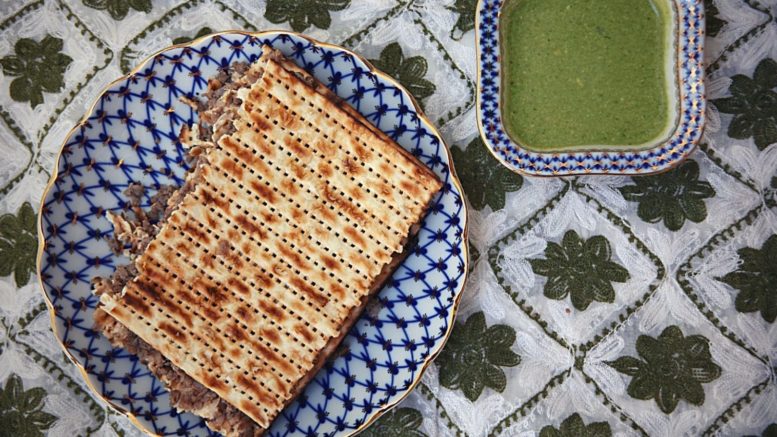 I first started cooking in my own kitchen when I got married at the age of 16. As a Syrian Jewish Mexican I brought with me my mother’s training and traditions, and my mother-in-law inspired me to be a dedicated home cook. Both would make enough to feed an army, despite having relatively small families.

This recipe for kewash en nogada (matzah meat pie with walnut sauce) was handed down by my paternal grandmother who was from Damascus, Syria. She brought it when she came to Mexico for the first time to meet my mother, her daughter-in-law. Exiled from Damascus and brought to Israel by the Jewish Agency for Israel before the state’s founding, my grandmother passed down her Syrian traditions to each of her 10 children.

Lovers of Mexican cuisine may be familiar with the Mexican national dish, chiles en nogada (stuffed poblano chilies in a walnut cream sauce). The sauce (nogada), which accompanies the meat pie in this recipe, can be traced back to medieval Sephardi influence on New Spain, as well as to other Levantine influences.

As my paternal grandparents came from a lower-middle-class background, blending ground beef with matzah was considered basic, cheap cuisine. Yet it’s often these kinds of dishes that withstand the test of time. It has been in our family for more than 180 years.

Even though it’s a family favorite, I only make it for Passover. I always double the portion because it goes fast!

Note: You can assemble the pie one day ahead of time, just remember to take it out of the refrigerator at least two hours before baking. Baking it at room temperature will avoid breaking any glass or ceramic casserole dish and also let any additional condensation dry out to keep the moisture in the dish even. You must serve in the same dish you bake it; you can’t transfer it, as it will break apart.

For the matzah meat pie:

For the walnut sauce:

1) To make the matzah meat pie, heat the oil in a large skillet, then add the onion. When the onion is transparent, add the ground meat. With a wire masher, smash the meat finely until it is separated and small. Add salt and pepper.

2) While the meat is cooling, grease a 30-centimeter glass or ceramic casserole dish, approximately 9 by 13 inches, with oil.

3) In a bowl full of water, soak each matzah square one by one, then arrange them at the bottom of the dish, make sure to cover the surface completely. You may have to break one or two matzah squares for a full covering. (Approximately 2 1/2 squares per layer, for 3 layers.)

4) Cover the bottom layer of matzah with ground meat.

5) Soak another 2-3 matzah squares one by one, and cover that layer completely. Cover again with ground meat, and continue until the dish is fully layered, ending with a matzah layer on top. Spray or brush the top matzah layer with oil.

6) Cover the dish with aluminum foil, bake in a preheated oven for 40 minutes at 350 F. If you prefer that the top layer comes out crunchy, remove the foil 5 minutes before taking out it of the oven.

7) Remove from oven and cut with into squares. Serve at room temperature with the sauce on the side.

8) To make the sauce, blend all ingredients together. If dry, add water. The texture should be slightly thick, yet moist.