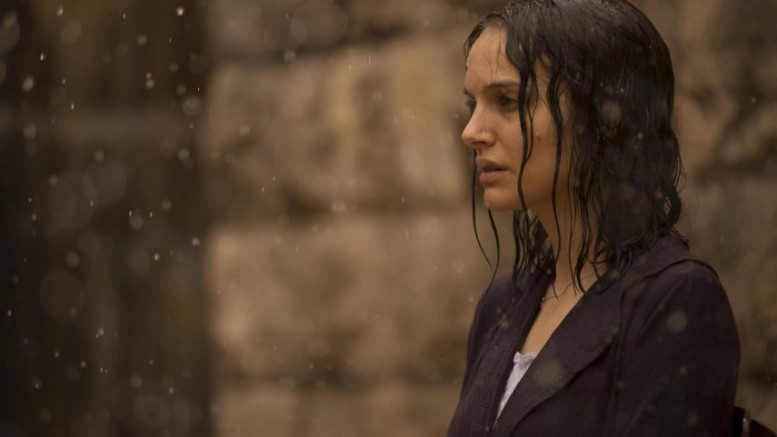 Israeli born actress, director, producer Natalie Portman is one of the top newsmakers of 5775. She is currently directing and starring in "Tale of Love and Darkness," filmed in Israel and in Hebrew.

(JTA) — Whether you love them or hate them — or your feelings are purely pareve — these 13 Jews repeatedly made the news in 5775.

American-Israeli coach David Blatt, in his first season as the Cleveland Cavaliers head coach, guided the club to the NBA Finals and put the Midwestern cityon the radar of Israelis — Prime Minister Benjamin Netanyahu among them. Blatt, 56, had come to Cleveland after coaching Maccabi Tel Aviv to an unlikely Euroleague title. The Boston-area native had played professionally in Israel, making aliyah in 1979, and in college at Princeton.

Few Jewish names are as well known worldwide as Abraham Foxman, who retired from the Anti-Defamation League after nearly three decades at its helm (and five decades on its staff).  In addition to being the world’s most outspoken critic of all things anti-Semitic, the 75-year-old Foxman has a personal story worthy of a film: Born in Poland one year after Germany’s invasion, Foxman was left in the care of his Catholic nanny during the Holocaust and did not discover he was Jewish — or reunite with his parents — until after the war.

Long one of America’s most prominent modern Orthodox rabbis, Barry Freundel, 63, shocked the Jewish community when he was arrested on charges of voyeurism. He was sentenced in May to 6 1/2 years in prison for secretly videotaping dozens of women in the mikvah affiliated with his Washington, D.C., congregation, Kesher Israel. Freundel had encouraged women studying for conversion to take “practice dunks” in the mikvah, and as the case against him unfolded, numerous leaders called for checks on rabbinic power and a more transparent system for Orthodox conversion to Judaism.

How many 82-year-olds not only continue to work full time but also have a hipster fan blog on Tumblr, T-shirts and tattoos celebrating them, and get to be played by Natalie Portman in a movie about their life? In recent years, Justice Ruth Bader Ginsburg, one of the U.S. Supreme Court’s most reliably liberal votes, has morphed from merely being a prominent public figure to “the Notorious RBG” and the subject of a forthcoming book and the aforementioned film. Though some critics think it’s high time Ginsburg retired, the Brooklyn-born justice and feminist icon is still going strong.

In December, 65-year-old American Jewish contractor Alan Gross got the best Hanukkah present ever: release from a Cuban prison, where he had been languishing for five years. Gross’ freedom was negotiated as part of a historic thaw in relations between the United States and Cuba. Since returning home, Gross has credited the Jewish community for helping to secure his freedom and has lobbied for easing U.S. travel and trade restrictions with Cuba.

American-born Michael Oren, 60, is the former Israeli ambassador to the United States — but his new book, “Ally,” has been anything but diplomatic, inflaming many with his harsh (and some say unfair) criticism of the Obama administration. Although Oren is a Knesset member for Kulanu, the center-right party’s leadership recently distanced itself from his contention that President Barack Obama betrayed Israel. Oren, who was raised in New Jersey and has a doctorate in Near Eastern studies from Princeton, made aliyah in 1979.

The Israel-born Natalie Portman, 34, was among the most talked-about stars at this year’s Cannes Film Festival, which premiered her directorial debut, an adaptation (in Hebrew) of a memoir by the Israeli writer Amos Oz. A Harvard grad and Oscar winner who will star in upcoming films about Jacqueline Kennedy Onassis and Ruth Bader Ginsburg, Portman sounded off in a recent Hollywood Reporter interview on various Jewish topics, including her dislike of Israeli Prime Minister Benjamin Netanyahu and what it’s like to be a Jew living in Paris.

Since announcing in April that he would challenge prohibitive favorite Hillary Rodham Clinton for the 2016 Democratic presidential nomination, the Vermont senator and self-described socialist (he’s officially an independent) Bernie Sanders has been a left-wing darling, appealing to those who see Clinton as too establishment. The only Jewish candidate in the race, the 73-year-old, Brooklyn-raised Sanders bristled recently when radio host Diane Rehm incorrectly said he had dual Israeli citizenship. That’s not to say he isn’t proud of his Jewish background, which he says sparked his interest in politics.

Lacey Schwartz, 38, grew up believing she was a white Ashkenazi Jew, only to discover that her biological father was an African-American man with whom her mother had an affair. In “Little White Lie,” a documentary that screened in major U.S. cities and aired on PBS in March, Schwartz explored her shifting racial identity and what it means to be black — and Jewish — in America. Designated a New York Times Critics’ Pick, the film received favorable reviews overall. Plus, in a year in which high-profile police brutality cases involving black youth and a massacre at a black church have captured the public’s attention, “Little White Lie” has contributed to the larger discussion about race in America.

Israel’s justice minister, 39-year-old Ayelet Shaked, came into the public eye this spring as Prime Minister Benjamin Netanyahu struggled to cement his right-wing coalition following the March 17 elections. Although she is secular and lives in Tel Aviv, Shaked is a member of Jewish Home, a pro-settler party. Her calls to deport African migrants, limit the powers of Israel’s High Court and enact the controversial “Jewish state” law have alarmed many on the left.

Wendy Sherman, who is in her mid-60s, was the chief U.S. negotiator in the nuclear deal with Iran and one of the few women participating in the negotiations. In May, Sherman announced that once the Iran deal concluded she would step down from the Obama administration, where she has served as under secretary of state for policy — the No. 3 position in the department — since 2011. In a statement published in The New York Times, President Obama praised Sherman’s “unique combination of intellect, toughness and persistence, which have made her one of the most effective diplomats of her generation.”

Inspired by her own father coming out as transgender in 2011, TV producer-writer Jill Soloway, 49, created “Transparent,” one of the most acclaimed shows of the past year. Described by the Forward as “the Jewiest show ever,” the Golden Globe Award-winning comedy follows the very Jewish Pfefferman family in the wake of its patriarch announcing that he is becoming a woman. The series — which features a female rabbi character — has been at the forefront of a larger transgender awareness zeitgeist this year (thanks, in large part, to one Caitlyn Jenner).

The announcement this year that “Daily Show” host Jon Stewart, 52, was stepping down devastated his fans – particularly when news surfaced that his South African replacement, Trevor Noah, has made anti-Israel remarks on Twitter. Nominated in July for an Emmy, the unabashedly liberal Stewart (nee Jonathan Stuart Leibowitz) presided over Comedy Central’s fake news program for 16 years, during which time there have been countless Jewy moments.