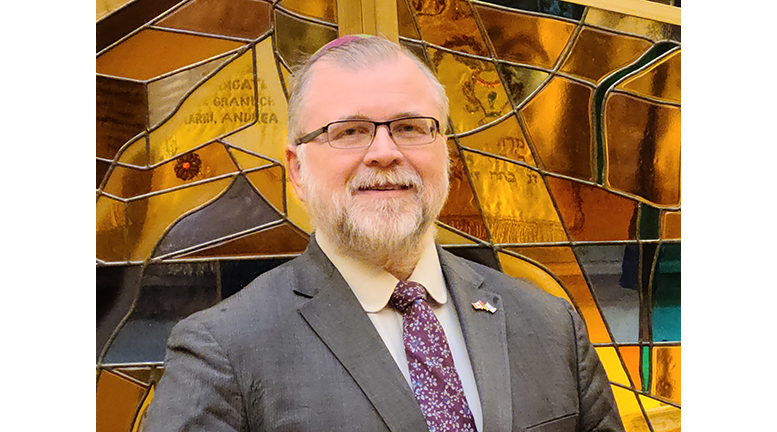 Born and raised as a Roman Catholic in Boonton, New Jersey, Russell Jayne made a spiritual journey that took him through Anglicanism to Judaism, transforming the former altar boy into an engaged Jew, a talented and skilled Cantor, and a soon-to-be Rabbi.

Having recently celebrated his 19th anniversary as a member of the tribe, Cantor Jayne describes his long and winding road as a “marvellous journey.” His story – which he shared during online talks for Beth Tzedec congregants and Limmud Winnipeg participants – inspires those who were born Jewish and those who have chosen Judaism.

“In 21st century North America, we are all Jews by choice, because every morning we have to wake up and make a definite choice to say I am going to live my Jewish identity.”    – Cantor Russell Jayne

Russell Jayne was born and raised in a town of about 7,000. It was a place where everyone knew each other, not unlike the tightly-knit Calgary Jewish community he now serves.

While his father was nominally Anglican, Jayne’s mother and grandmother were devout Roman Catholics, steeped in Slovakian tradition.

“They made religion beautiful for me,” recalled Cantor Jayne, who reminisced about the beautiful rituals in his family’s home, especially around the major holidays. “Church was just something we did.  It was never questioned.  Sunday morning you just got up and you went to church.”

“For me, that was probably one of the most beautiful and meaningful experiences in terms of shaping my early life . . . . Ritualism spoke very, very deeply to me,” Cantor Jayne said.

It was inevitable that Russell Jayne would become an altar boy. “The priests would always request my presence when it was time for a specific service . . . because I really was exacting in my ritual and I knew everything like the back of my hand,” said Jayne.

While his peers focused on sports, Russell Jayne was on speed dial at the parish.

“I think one of the reasons that I was originally drawn to the cantorate is because of that love of ritual.

“The chazzan, the cantor, is the keeper of the traditions of our people and I really see it as a natural extension of my life as an altar boy . . . . Now, as a Jew, I get to learn and experience and understand all of the beautiful ritual foundation that we have, and I get to teach it to the next generation.”

Cantor Jayne noted that people are often uncomfortable with ritual because they don’t understand it. Yet ritual, when properly explained, can help people become more connected to their Judaism.

Russell Jayne remained a devout Catholic until he went to university. His discovery that he was gay would, however, soon lead to profound changes.

“I could only come out if I could justify it with my faith at that time,” recalled Jayne, who worked hard to reconcile his spiritual life with his desire to live proudly and openly as a gay man.

“I just couldn’t give up my faith because of the foundation that my mother and grandmother laid out for me. They made faith such a beautiful and integral part of my life that for me to come out of the closet necessitated that I should be able to be a person of faith and still be able to express who I was as a homosexual.”

Delighted when he had worked things out for himself, Jayne went to speak with the priest at his home parish. What ensued was an “extraordinarily disappointing conversation.”

“It didn’t mean I wasn’t going to be a person of faith anymore, but what it meant was that I could no longer be Roman Catholic,” Cantor Jayne recalled.

After some exploration and study, Jayne was received into the Anglican Church when he was 21. He jumped in with two feet, joining the choir and the altar guild. “Anglicanism was something that really helped and sustained me,” said Jayne, relieved that he didn’t have to give up mainly familiar rituals and tenets.

After graduating from the Philadelphia College of Pharmacy and Science, where he earned Bachelor of Science and Doctor of Pharmacy degrees, Jayne met his namesake and future husband, Russell Janiger, who was Jewish but only marginally engaged.

Janiger had attended Hebrew school but “remembered nothing.” Although his family celebrated Passover and the High Holidays, the ritual that most stood out for him was the annual argument with his mother about whether he had to take time off from work on both Rosh Hashanah and Yom Kippur.

“That bothered me,” recalled Cantor Jayne, who said he was frustrated and sad that his boyfriend related to his own religion “at arm’s length.”

Russell Jayne decided he would learn about Judaism and teach his soon-to-be fiancé about his heritage while, at the same time, exploring the roots of his own Christianity.

Jayne encouraged Janiger to affix a mezuzah to his front door. He studied the Haggadah with him so as to make Passover more meaningful and suggested that they buy and light a menorah on Chanukah. “He humored me,” said Jayne, who began to suspect that he was gaining more from the effort than his fiancé was.

As Jayne continued to explore Judaism, he found that it was affecting his practice of Anglicanism. “I began to become very critical of the Christian interpretation, especially of the Jewish bible,” said Jayne.

He was going to church and singing in the choir but, more and more, Russell Jayne was discovering that he had a problem with Christian theology.

Ironically, Jayne found himself back in a closet, of sorts. He kept his struggle from Janiger, fearful that the pull he felt toward Judaism might negatively impact their relationship. Jayne continued to delve into Jewish ritual while leading a Christian life. Russell Janiger sometimes accompanied him to church, much to the consternation of his mother.

One December night, everything changed for Russell Jayne. Returning with Janiger after an evening on Broadway, he remembered they hadn’t yet lit the Menorah. “You light the menorah,” said his Jewish partner. “I’m going to bed.”

Jayne lit the menorah and began to wonder whether he had encouraged the ritual for his fiancé or for himself. He pondered whether he was truly Christian anymore. Suspecting that he had moved on, Jayne began to “edit” from his personal theology all the aspects of Christianity that no longer worked for him. A friend told him that what was left looked a whole lot more like Judaism.

After some more thought, Jayne realized he had been drawn to Jewish ritual for his own sake more than his partner’s. One night, unable to sleep, he made a 3 am decision that would alter the former altar boy.

When he softly expressed aloud his intention to convert, a strange thing happened. The stained glass image of a cross that hung in his living room window – next to Janiger’s stained glass chai – fell to the floor.

“I am not a superstitious man but sometimes the universe does, I think, send a very clear message when you make the right decision.

“And I do like to think that at that moment, I made the right decision.”

The next morning, when Jayne told his fiancé what had transpired, he nearly had to pick him up off the floor.

Jayne studied toward his conversion for nine months, guided by Reform Rabbi Melinda Pankin, who helped him to find his place on the Jewish spectrum. It is a good thing she insisted on having both Reform and Conservative Rabbis as part of the Beit Din that participated in his conversion, because Jayne found his spiritual home in Conservative Judaism.

After he converted in the spring of 2002, Jayne found a friend and mentor in Rabbi Ruth Gais, also a Reform Rabbi, who encouraged him to study Judaism further and to learn the nusach – distinctive melodies for each of the prayer services – so that he could lead their small, independent congregation, Chavurat Lamdeinu, in prayer.

“She saw my passion,” recalled Jayne, adding that Rabbi Gais urged him to consider the cantorate.

Although he saw himself as a Conservative Jew, the movement’s Jewish Theological Seminary (JTS) wasn’t yet accepting openly gay students. Jayne therefor applied to the Reform-affiliated Hebrew Union College. Rejected there, he was later told by a selection committee member that he had been deemed “too pious.”

Unwilling to return to the closet, Jayne honed his davening and nusach skills and patiently waited for the inevitable. In 2008, JTS passed a resolution allowing openly gay Jewish men and women to enroll. He spent five years at the H. L. Miller Cantorial School and Jewish Music College, one of them in Israel and four at the JTS Campus on Manhattan’s Upper West Side.

Following his graduation and ordination in 2013, Cantor Russell Jayne discovered that while the seminary had become more progressive, many congregations had not. Some openly expressed a preference for male cantors who had wives and not husbands. Some more liberal-leaning congregations already had male Rabbis but, in the interest of diversity, wanted to hire female Cantors.

After filling some interim positions, Cantor Jayne was hired by Calgary’s Beth Tzedec Congregation in 2014. He had been told by friends that he would never find a job in Canada where Conservative Judaism was more traditional than in the United States.

“I didn’t realize that, really, what they were talking about was Eastern Canada, and that Western Canada is truly a very, very different atmosphere,” said Jayne.

“Here in the wild west we do seem to have just a slightly more liberal, progressive viewpoint.”

While leading the congregation as Kol Bo – an increasingly popular position that combines cantorial and rabbinical responsibilities – Cantor Jayne has been studying online toward rabbinical ordination through the Pluralistic Rabbinical Seminary. He anticipates achieving Smicha by the end of this calendar year.

“I’ve come a long way from the altar boy in New Jersey, but yet in some ways I really haven’t. I’ve really just deepened the foundation that my mother and my grandmother gave me.”

In recognition of their profound influence on his life, the Cantor honoured his late mother and grandmother by taking Hebrew names based on their monikers. Thus he became Yochanan Yosef, for his mother, Anna, and his grandmother, Josephine.

While the matriarchs in his life had passed away before he embarked on his Jewish Odyssey, Cantor Jayne credits them for the religious affinities that led him to Judaism. He continues to feel supported by his father – whose name is also Russell.

The Cantor’s mother-in-law – who had initially worried that Russell Jayne was going to turn her son into a Christian – didn’t kvell at Jayne’s conversion to Judaism because he was now too religious.

“It was all about choice,” Cantor Jayne says.

“I still wake up every day and choose to be Jewish, but it’s one of the best choices I ever made in my life.”