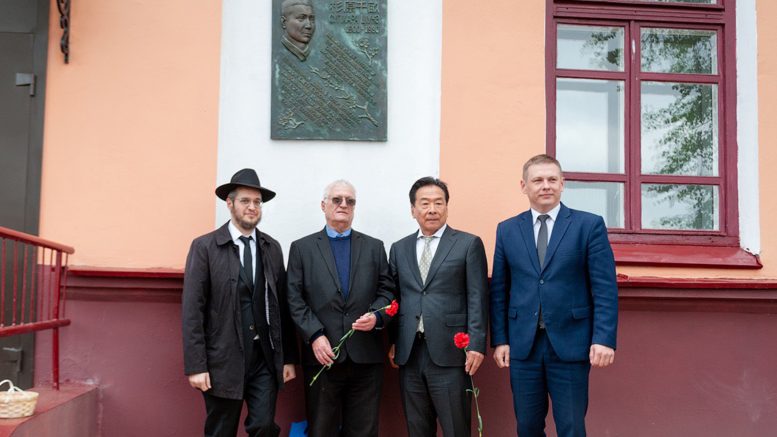 Nobuki Sugihara, second from right, with Chaim Chesler, in blue shirt, and guests of Limmud FSU Minsk at the village of Mir, Belarus, during an unveiling of a plaque for Chiune Sugihara, May 2, 2019. (Boris Brumin)

(JTA) — After decades of relative obscurity, the tale of the Japanese diplomat Chiune Sugihara has become one of the best-known Holocaust rescue stories, rivaling those of Oskar Schindler and Irena Sendler.

The late Sugihara, who issued thousands of life-saving visas to Jewish refugees in Lithuania in defiance of his pro-Nazi government, became popularly known only about 20 years ago, in part due to the 2000 opening of a museum about him in Japan. A year earlier, a Sugihara museum celebrating his actions had opened in Kaunas, Lithuania.

Amid the growing recognition, one of the Sugihara’s four children, Nobuki, recently began traveling around the world telling audiences about his father’s legacy.

But Nobuki Sugihara’s aim is not to glorify his father, he told the Jewish Telegraphic Agency. If anything, his goal seems to be to cut his father’s public image down to size.

“I noticed a few years ago there are inaccuracies in circulation about what my father had done,” Nobuki Sugihara, 70, said in an interview earlier this month in Minsk, Belarus, where he spoke about his father at the Limmud FSU conference on Jewish learning. “I started speaking just to set the record straight on those embellishments.”

On May 22, Nobuki spoke at New York’s Museum of Jewish Heritage. One of the stories he refuted in his talk was the one about his father writing visas on the train he left on for Germany after being expelled from his post in Lithuania. Sugihara supposedly “threw the signed visas” through a train window, as the Kaunas museum states on its website.

Both Sugihara museums say it happened. The Japanese one even plays a film that re-creates it.

“That never happened,” Nobuki Sugihara said. “Maybe, maybe he gave three or four visas at the hotel” just before his departure.

Another myth has Chiune Sugihara giving his consular seals to refugees so they could continue making visas on their own after he was forced to leave. Also never happened, Nobuki said.

The formation of myths around any heroic character is natural, he acknowledged.

“But my father would not have liked it,” Nobuki Sugihara said. “He would have not approved, he was always in favor of telling things like they were, no melodrama.”

Some Christian writers and websites have attributed religious motives to Sugihara. One fake quote has him saying “I may have to disobey my government, but if I do not, I will be disobeying God.”

Yet religion never entered the picture, according to Nobuki.

“The truth is, he just took pity on these people and decided to do something,” Nobuki Sugihara said. “This wasn’t about ideology.”

Chaim Chesler, founder of Limmud FSU, thinks that the younger Sugihara is actually doing a service to his father’s legacy.

“Sugihara’s legacy as a role model is more relatable and powerful when it accurately tells the reason he helped these people: human kindness. Not a political or ideological move,” Chesler said.

The life of Nobuki Sugihara, Chiune’s youngest son and the only one still alive, has been shaped significantly by what his father had done. In 1985, Chiune Sugihara was declared a Righteous Among the Nations by the State of Israel. In 1968, the Israeli Foreign Ministry arranged for a scholarship for Nobuki at Hebrew University.

The people from the Israeli Embassy “were the only people I knew from outside Japan, from the West, at the time,” Nobuki recalled.

He went to Israel and eventually took a job at the Ramat Gan diamond exchange, where he learned the secrets of the trade at a time when it was dominated by Jews in Israel, Belgium and London. Nobuki Sugihara is now a diamond trader in Antwerp, Belgium — a city with a sizable Jewish population — and lives there with his wife. He has four children of his own, speaks fluent Hebrew (from his time in Israel) and has passive knowledge of Yiddish.

Even without the embellishments that Nobuki Sugihara insists on debunking, his father’s story is legendary. Chiune Sugihara, who died in 1986, ignored orders from Tokyo while posted to Kaunas (then Kovno) in 1940 and helped Jews flee the Nazis and travel through Russia to China, Japan and beyond. He issued over 2,000 visas, which led at least twice as many people to safety. As many as 100,000 people today are the descendants of the recipients of Sugihara visas.

His official title was with the consular department in Kaunas, but really he was a Japanese intelligence operative collecting information on the Russians, his son said in Minsk, confirming an open secret about the father. When the Russians invaded Lithuania in 1940, foreign diplomats, including Sugihara, were ordered to move out.

Before leaving, Sugihara and his Dutch counterpart, Jan Zwartendijk, issued the visas, including some to the entire student body of the Mir Yeshiva. Shortly thereafter, the Nazis invaded Lithuania and turned that country into a graveyard for its Jews. Mir was the only yeshiva to escape Eastern Europe.

Chiune Sugihara had no idea for decades that he had saved so many lives, according to his son.

“He assumed a few people, maybe a few dozen, had actually used the visas to escape,” Nobuki said. “He truly did not realize the magnitude of his actions until much, much later in life.”

These actions had a dramatic influence on the diplomat’s life and that of his family. Chiune Sugihara was forced to leave the Japanese Foreign Ministry in 1947. A superior called him in for a talk and said: “You know what you did. Now you need to leave the ministry,” according to Nobuki.

Disgraced for violating orders, he became an office manager for a trading company and moved to Moscow in 1960. (Sugihara spoke fluent Russian, in addition to several other languages.) Before marrying Nobuki’s mother, Yukiko, Chiune was married to a Russian woman with whom he stayed in contact throughout his life.

“He always felt responsible for everyone in his life,” Nobuki said of his father.

The younger Sugihara said it gives him great pleasure to tell Jewish audiences about his father’s character, which few of the people he rescued got to know.

“I feel at home speaking to Jewish audiences,” Nobuki said. “I feel the warmth from the people I speak to, who react to my directness.”

Most of all, though, he finds conversations with survivors and their descendants satisfying.

During a recent encounter in Israel, one woman recalled how Nobuki’s father, sensing her distress in line for a visa, told her to go back home. The diplomat said that “in the morning, she will have her visa and everything will be all right.”