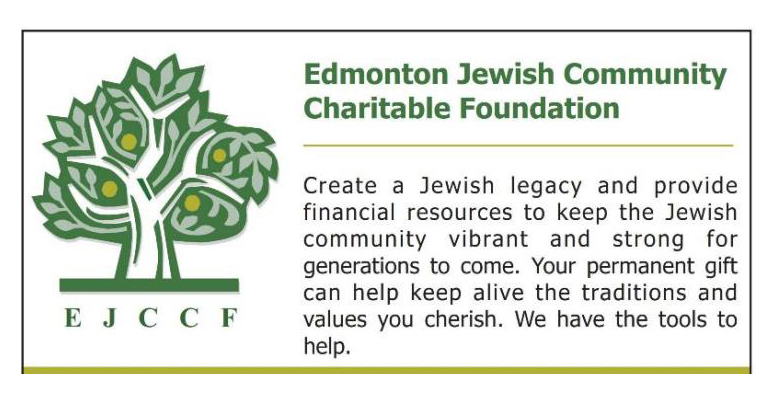 (AJNews) – Endowment funds are increasingly critical when it comes to the future vibrancy of our Jewish community organizations.  With that in mind, the leaders of the Edmonton Jewish Community Charitable Foundation (EJCCF) are seeking to further promote endowment giving in Jewish Edmonton.

An important step toward that goal was the December 2019 vote endorsing the EJCCF board recommendation to entrust the management of its donor funds to the Edmonton Community Foundation (ECF).

As of August 31, 2020, funds held by the EJCCF totalled approximately $1.5 million.  The capital yielded some $37 thousand in grants to Jewish organizations last year.

While the funds are not huge, they enrich Jewish communal life, supporting some much loved initiatives, says EJCCF Chair Stephanie Hendin. Recent examples include a grant supporting the Edmonton Jewish Film Festival, a  substantial grant  to Camp BB Riback earmarked for the purchase of hand washing stations and PPE (a sign of the COVID times), and the purchase of guitars to augment the music program at Edmonton Talmud Torah.

Prior to the decision to transfer EJCCF funds to the Edmonton Community Foundation, a small volunteer board handled all business pertaining to the management and investment of donor funds. Over the years, successive EJCCF boards had the assistance of trusted investment advisors, occasional part time help, and, in recent years, administrative assistance by the bookkeeper at Jewish Federation of Edmonton.

The EJCCF and Jewish Federation of Edmonton are linked, though the EJCCF board has functioned independently for many years, notes long-time board member Michael Paull.

While successive EJCCF boards have ensured good rates of return on the endowment gifts entrusted to the EJCCF, Hendin says the decision to partner with Edmonton Community Foundation makes sense on multiple levels.

“It is hard to administer, market and grow endowment funds if you are not big enough,” adds Hendin who characterizes the EJCCF’s partnership with the ECF as a win-win situation.

The ECF was managing some $640 million in funds as of December 31, 2020.  Last year alone they disbursed close to $36 million in grants. They handle funds on behalf of many of Edmonton’s most prominent charitable organizations including hospital foundations, places of worship, theatres and other major arts organizations.  The ECF also manages myriad funds established by individuals and families.

Now that ECF handles the business end of endowment gifts raised within the Jewish community – including such specialized tasks as the drafting of fund agreements – the EJCCF will be able to concentrate its efforts on development and disbursement of funds, Hendin says.

The synergy has been enthusiastically embraced by fund holders, Hendin told AJNews, adding that donor funds have already been transferred to the ECF and new fund agreements established.

Together with EJCCF Board members Michael Paull and Catherine Miller-Dolgoy, Hendin will continue to promote endowment giving in the Edmonton Jewish community. Both the EJCCF and ECF will play an active role in the stewardship of donors, Hendin said.

Edmonton Community Foundation Counsel and Philanthropy Advisor Kathy Hawkesworth has been instrumental in ensuring a smooth transition and a wonderful working relationship between ECF and the EJCCF, Hendin told AJNews.

Hawkesworth has similar high praise for the efforts of the EJCCF and says the partnership between the two foundations will allow each organization to shine in its area of strength. ECF has an economy of scale, time-honoured procedures and a professional staff to carry them out. For its part, EJCCF is better positioned to initiate conversations with Jewish donors and potential donors about their hopes and dreams for the Jewish community; to assess where funds are most badly needed; and to make disbursements in accordance with fund agreements.

“We can’t reach into the [Jewish] community as well as they can, but because we have processes and staff, we can do some of the logistical stuff.  It is just better consolidated so that energies can be placed where the value really is,” Hawkesworth says.

She exudes passion for the work.

“You get to talk to people who are committed to their community and want to make a difference,” Hawkesworth says. “Folks that place their money in an endowment fund get those dollars recycled over and over because they are invested instead of spent, and then it’s a portion of the fund that is granted each year.  It creates this engine that can be counted on year over year to provide support.”

Funds can be named in honour of loved ones who will thus be remembered in perpetuity.

“To me, that is one of the wonderful and reflective components of these funds,” Hawkesworth adds.

The process is donor-centric, allowing individuals, families and organizations to support those agencies and/or causes that are important to them.

Current and potential EJCCF fund holders have the reassurance of additional transparency and checks and balances now that donor funds are overseen by both the Edmonton Community Foundation and the Edmonton Jewish Community Charitable Foundation.

EJCCF Board Chair Stephanie Hendin urges community members who are interested in establishing a fund in support of their most cherished Jewish community programs or causes to contact her at ejccfoundation@gmail.com or by leaving a phone message at the Jewish Federation of Edmonton, 780-487-0585. As always,  EJCCF is also on the lookout for volunteers willing to bring their time and talent to conversations with community members about gifts that will keep on giving dor l’dor – from generation to generation.

The Edmonton Jewish Community Foundation’s Certificate of Incorporation was signed on October 21, 1966. Two months later, the Memorandum of Association was signed by Tevie Miller and Daniel Pekarsky.  Supporters of the initiative included a list of 24 Edmonton Jewish community leaders and philanthropists, among them Rose Bogoch, Mickey Dlin, Marvin Dower, Evelyn Kline, Boris Laskin, Eugene Pechet, Joe Shoctor, Henry Singer, and Dr. Morris Weinlos, all pillars in the Jewish community and the Edmonton community at large.

The intention was to garner endowment gifts in support of a wide range of initiatives including the advancement of Jewish education; research in the fields of health and welfare; scholarships, prizes and bursaries;  interest-free education loans;  teacher training;  the maintenance of buildings devoted to education and Jewish worship; and poverty relief.

While intentions were good, the foundation experienced a lengthy period of dormancy, but in 2001 EJCCF became more active and began to attract donors. The work has always been driven by volunteers without benefit of any full-time staff.

Current EJCCF board members have deep roots in the Edmonton Jewish community, representing the second generation of family members connected with the foundation.  The longest-serving board member, Catherine Miller-Dolgoy, follows in the footsteps of her late father Tevie Miller.  Like his uncle Tevie and his late mother, Helen Paull, Michael Paull has dedicated himself to the work of the foundation. EJCCF Board Chair Stephanie Hendin became involved in the Foundation after years of Jewish Federation board experience and has, since, established with her family a charitable fund in memory of her later father, Alex Davis.

According to Edmonton Community Foundation Counsel and Philanthropy Advisor Kathy Hawkesworth, Tevie Miller – who later served as the Associate Chief Justice of the Court of Queen’s Bench and as Chancellor of the University of Alberta – was instrumental in the formation of the Edmonton Community Foundation, gathering community leaders together with the idea of forming a community foundation.

In a brief history on the ECF website, Curtis Gillespie writes, “The story of ECF began in 1970, with a letter from then-lawyer Tevie Miller to the provincial secretary. In it, he explained a group of local citizens had hit upon the idea of forming a foundation, which “would provide a very useful service for the city of Edmonton and its citizens … it is thought that the best procedure would be to seek a Private Bill at the next sitting of the Legislature.” On April 27, 1971, the Edmonton Community Foundation Act was passed.”

A period of dormancy followed but 18 years later the ECF was “reborn” and has been a growing concern ever since.

Marshall Shoctor, who has just begun a second three-year term as secretary of the Edmonton Community Foundation, is one of many Jewish community members who have strengthened the greater Edmonton community by serving in leadership positions at ECF.

Many members of the Jewish community – and organizations with which they are affiliated – have established endowment funds at ECF, supporting a wide variety of agencies and causes in the greater community.

Now Catherine Miller-Dolgoy, Michael Paull and Stephanie Hendin have arranged a shidduch – or marriage – between the Edmonton Jewish Community Charitable Foundation and the Edmonton Community Foundation that will help fulfill Tevie Miller’s vision of strengthening both Jewish communal and civic life.