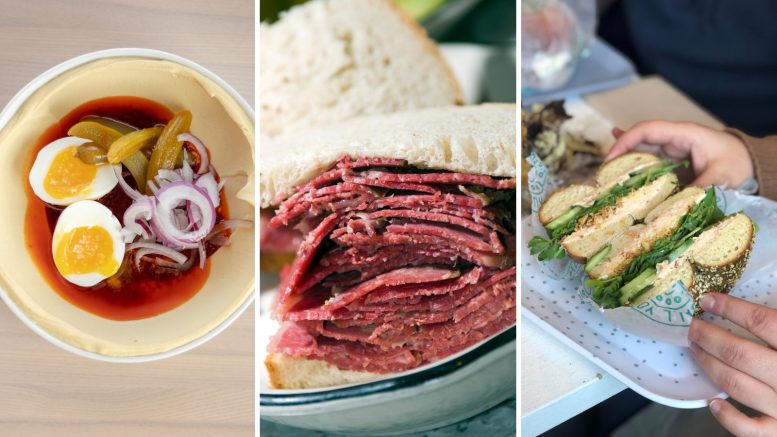 (The Nosher via JTA) – It seems not too long ago that Jewish food was a novelty, the comfort food of older generations. The heyday of Yiddish comedy in the Catskills is long gone and for many young Jews, Jewish food — especially Ashkenazi food — was only something you ate on holidays or when visiting bubbe.

Here’s a list of some of the most exciting Jewish restaurants that opened in 2018.

Brought to the Mile High City by the James Beard Award-winning chef Alon Shaya, Safta toes the thin line between Israeli classics and modern food-porn. Delicious hummus is served topped with an Instagram-worthy, yolky soft boiled egg — or ravished by a “ménage à traif” with sweet, forbidden blue crab meat. The menu gets even fancier: Safta serves kibbeh nayeh with malawach (lamb tartare and crispy Yemenite flatbread), duck matzah ball soup, and even caviar and potato chips. While Safta is too expensive to scratch your daily Israeli food itch (a schnitzel sandwich will run you $17 before tax and tip), it is the perfect place to celebrate special occasions with friends who love to eat well and drink Arak. www.eatwithsafta.com

Call Your Mother celebrates and embraces the differences between Jewish and Jew-ish food. I has no problem mixing brisket and cheese for a Jew-ish Philly Cheesesteak, or combining pastrami and crispy rice for, well … pastrami crispy rice. Founder Andrew Dana and Argentine head chef Daniela Moreirra even offer a South American matzah ball sopa (“¡che matzo-boludo!”) that they swear is made true to “your South American grandma’s recipe.” During the day, Call Your Mother is open to the public, but at night the restaurant transforms into a semi-private dinner party. For $62 you can get a seat at the Supper Club — a nightly communal dinner with themes like homemade pasta, Shirley’s brisket and McMamma’s: Gourmet Fast. Food. www.callyourmotherdeli.com

Kish-Kash is the newest concept restaurant from the Israeli chef Einat Admony. The restaurant serves enticing food from a part of the Jewish world beyond the Ashkenazi horizon, including homemade couscous with a variety of companions like chicken tagine (served with olives and a three lemon sauce), chraime (spicy fish stew, a Sephardic favorite), braised short ribs and even mafroum (a Tunisian stuffed potato). For a few extra bucks, dishes can come with any of three robust North African sauces and spreads. Before you say dayenu, don’t forget about their hummus, served with an indulgently large slice of challah. www.kishkashnyc.com

It has been an exciting few years for Jewish food in Denver; the ubiquity of Rosenberg’s Bagels has taken the town by storm and Leven Deli Co. is charming Denverites with its new take on what it means to be a deli. But the folks at Rye Society have been around before all these other guys even moved to Colorado. Rye Society owner Jerod Rosen is a third-generation member of the Mile-Chai Club. From a small space north of downtown, Rye Society serves down-to-earth, mouthwatering classics good enough to make even the kvetchiest eater happy to schlep across town for a sandwich and some of Aunt Cindy’s homemade rugelach.  www.ryesociety.com

Larder Delicatessen & Bakery is more than just a restaurant; it’s a sanctuary of experimentation and learning. Larder creates a bridge between Jewish food lovers and food nerds. The menu features a heavy use of koji — filamentous fungus (aka mold) ubiquitous in Japanese cuisine used to makes things like miso and soy sauce — to make many dishes, including pastrami, that may well have a savory depth beyond anything you thought possible. Aside from serving outstanding food, Larder also works to build the culinary community, offering classes from foraging to fermentation and beyond. But you better act fast — the classes fill up fast. https://larderdb.com

Daughter’s Deli is literally the restaurant child of the famed Langer’s Deli in L.A; Daughter’s is owned by Trisha Langer. Most restaurateurs adopted the deli, but Langer was born into it. Unlike the other places on this list, Daughter’s doesn’t spend energy trying to reinvent the genre — the most outlandish thing it serves is grilled cheese on challah (which sounds unspeakably delightful). The menu focuses on a short list of no-nonsense classics, each with clear intention and eye for detail. Whether you’re going for a little whitefish salad and a bagel or some corned beef on rye, after a quick glance at Daughter’s Deli, you know you’re in good hands. www.daughtersdeli.com

(Josh Klasco is a Denver-based writer and multi-instrumentalist. He is a founding member and songwriter of the Colorado-based klezmer band Hadgaba. His humorous writings, critiques, food reviews and more can be found across the internet or on his Medium page @jklasco.)