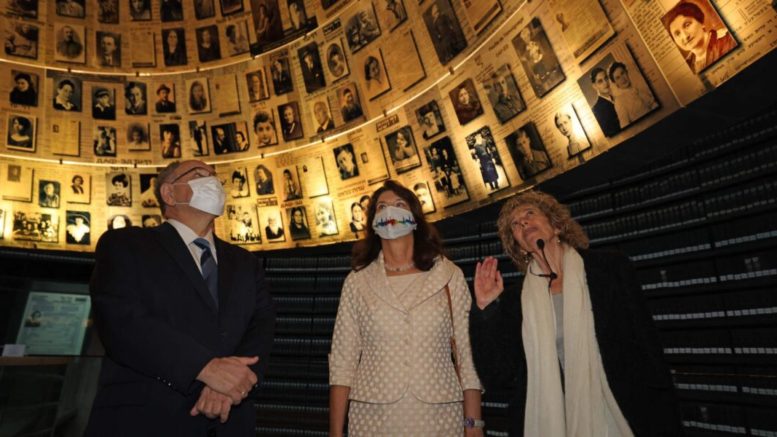 STOCKHOLM (JTA) — Sweden’s foreign affairs minister visited Israel on Monday, ending a seven-year freeze in diplomatic relations between the two former allies that had started over disagreements on Israel’s treatment of the Palestinians.

“Sweden and Israel have a deep and long-standing friendship, with extensive trade and cultural ties. There are also quite a few arguments. In recent years, these arguments have caused us to drift apart. Today we are changing that,” Lapid said at a press conference with Linde in Jerusalem on Monday.

The visit came less than a week after Sweden’s government hosted a high-powered international conference on combating antisemitism in Malmö, a city known in recent years for being a hotspot of that form of hate.

“On behalf of Sweden I promise that we say ‘never again,’ and mean it,” Linde tweeted Monday after a visit to Yad Vashem, Israel’s Holocaust memorial and museum. “We will continue to take action to combat antisemitism in all its forms, to make sure that we never forget.”

Israel and Sweden had ceased formal relations in 2014, after Sweden officially recognized a Palestinian state. The following year, after the multiple terrorist attacks in Paris that left 130 dead, Sweden’s then-foreign minister, Margot Wallström, linked the killings to what she argued was a feeling of hopelessness among Palestinians.

Wallström, a longtime outspoken supporter of a Palestinian state, then in 2016 called for an investigation into how Israeli security forces responded to Palestinian attackers during a spate of violence. In response, Lapid, then an opposition leader in Israel’s parliament, called her antisemitic.

On Monday, Lapid — whose father and grandmother were among the tens of thousands of Jews saved by the Swedish diplomat Raoul Wallenberg during the Holocaust — welcomed Linde at a press conference in Jerusalem.

“In my parents’ house there is a wooden box in which my late father kept some souvenirs that survived the Holocaust. There is a yellow badge with the letter J, Jude — Jew, some photographs and letters that somehow survived the war,” Lapid said. “And there’s a ‘Wallenberg passport,’ a document laden with seals and signatures, designed to hide the fact that Raoul Wallenberg had virtually no authority to grant it to my father. But he did … and saved their lives.”

Linde said that “Sweden’s policy on the Israeli-Palestinian conflict,” which supports a two-state solution, “has not changed.” She added that she has been impressed by how Israel’s new government has shown it is interested in improving living conditions for Palestinians in Gaza, and that it has condemned violence by Israeli settlers.

On Tuesday she visited Palestinian Authority President Mahmoud Abbas and PA Foreign Minister Riyad al-Maliki in Ramallah, and in talks emphasized that Sweden wants to play “a bigger role in renewing the peace process.”

“I have invited both [Israel’s and the PA’s] foreign affairs ministers to Stockholm,” Linde also told the Swedish newspaper Expressen. “Not at the same time though, we take it step by step.”