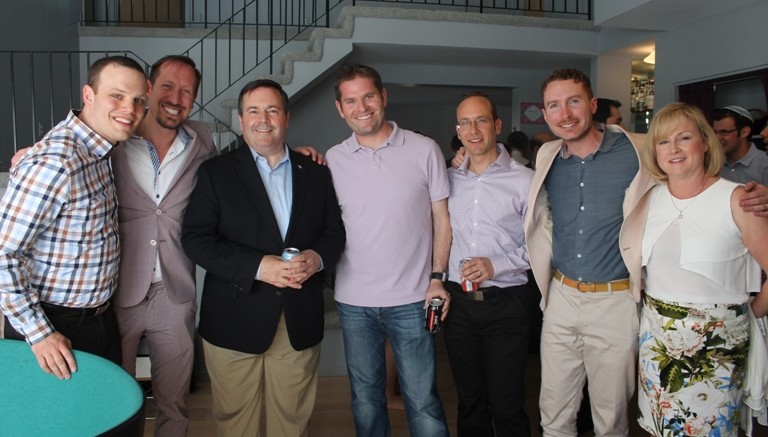 (May 19, 2015) – A select group of Edmontonians had the pleasure of meeting the Hon. Jason Kenney, Canada’s Minister of National Defense and Minister of Multiculturalism, at a small invitation-only afternoon event held on May 18 at the home of WEJCC president Joel Reboh and his wife Christina Tsiporah.

Minister Kenney (MP for Calgary South East) has long been a suspected leadership hopeful  in the Conservative Party of Canada.  He is a wonderful speaker and considered on Parliament Hill to be the most influential Member of Cabinet. While at the event, Minister Kenney introduced the likely Conservative  candidate for Edmonton West Kelly McCauley and for St. Albert  Michael Cooper. He also spoke about Canada’s strong friendship and unwavering support of Israel as well as describing some aspects of Canada’s role in the Middle East.

He criticized the defense platforms of both Justin Trudeau and Thomas Mulcair and reminded everyone in attendance to pay attention to the upcoming federal election rather than follow the NDP trend set in the recent provincial election.

Minister Kenney, 46, is a seasoned politician having been re-elected 5 times and represented Calgary Southeast in the House of Commons since 1997. He is known as the hardest working MP in Ottawa and he is an ardent supporter of Israel.

Last month on the occasion of Yom Haatzmaut, Kenney issued this statement:

“Canada was proudly one of the first countries to formally recognize the State of Israel and was one of the 33 countries that voted in favour of the 1948 United Nations resolution which called for the creation of a Jewish state.

“Those celebrating Yom Ha’atzmaut will also reflect on the remarkable story of Israel. After more than two thousand years, the dream of a homeland for the Jewish people was finally realized. Unfortunately, after enduring unspeakable horrors and great suffering throughout their history, the people of Israel faced opposition the moment their state was born.

“Today, Israel continues to face constant threats to its existence. It remains resilient in the face of adversity and Canada is proud to continue to support the independent State of Israel. The deep friendship between Canada and Israel is rooted in our shared values of freedom, democracy and the rule of law.”

In addition to being a good friend and avid supporter of Israel, Minister Kenney is also a strong advocate for Holocaust education in Canada.

On the occasion of Yom Hashoah last month, the Minister spoke eloquently at the Canadian War Museum in Ottawa. He said, “The Holocaust, in its immediacy, constellates everything that we mean by evil… (it is) the expression of ordinary secular corruption raised to immense powers of magnification and extremity.

“Every year we are moved to reverence at this ceremony by the presence of survivors of the Shoah. But every year, fewer of them are with us, which is why we must renew – and are renewing – the work of remembrance. It is why we will soon see the National Holocaust Memorial rise within sight of this place, as a sign for future generations.

“It is why the Government of Canada supports initiatives such as living digital archives, to record the testimony of our survivors, so that their memories can be transmitted over the centuries. It is why we built the Canadian Museum for Human Rights in the heart of Canada, in order to remember the consequences of denying human dignity.

“And we will continue to remember the other great genocides of the “century of tears,” including the centenary of the Armenian Genocide, which we commemorated with the House of Commons adopting a motion to establish April as Genocide Remembrance, Condemnation and Prevention Month.

“Finally, we must give real meaning to the commandment “never again”, which comes to us from the voices of the survivors. Because as Elie Wiesel reminded us: “We must take sides… Sometimes we must interfere… Wherever men and women are persecuted because of their race (or) religion… that place must – at that moment – become the centre of the universe.”

“That is why we have deployed the Canadian Armed Forces to join the fight against the genocidal anti-Semitic death cult of Da’esh, the so-called Islamic State in Iraq and Syria. By acting with our allies, we have saved countless innocents – Christians, Yazidis, and others – from attempted genocide.

“Just as Canadian troops helped to liberate Bergen Belsen seventy years ago this month, today Canadians are helping to defend human dignity against genocide. And so today we rededicate ourselves to a world without genocide, as we call to mind the sacred memory of the Six Million.”