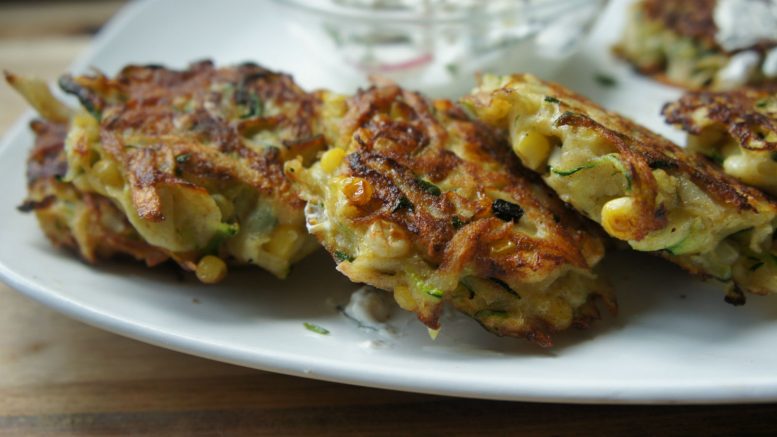 (The Nosher via JTA) — Who says latkes are just for Hanukkah? Well, it’s not me. And summer is a great time try using seasonal produce to make some crispy, delicious latkes.

I recently fried up some fresh corn and zucchini latkes, served with herb sour cream (or yogurt) and thinly sliced radishes. The texture of the fresh corn with zucchini and potato was so delicious. If you’re looking for other ideas for non-potato latkes try broccoli stem latkes or even these healthful spaghetti squash and quinoa fritters from Julia’s Album, which after all, is just another name for latke.

These corn and zucchini latkes are great for a light dinner, or paired perfectly with some poached eggs for brunch. Ready to cook?

2 ears of corn, kernals removed (corn will be raw)

Cut ends of zucchini and coarsely grate. Place in a large bowl with 1/4 tsp salt. Allow to sit for 20 minutes.  After 20 minutes, place shredded zucchini in a kitchen towel and wring out excess water.

Form mixture into patties, size should be approximately 1/3 cup.

Cook latkes until golden and crispy on first side, around 3-4 minutes. Flip and cook for another 2-3 minutes.

Place onto a wire baking rack and add a pinch of salt immediately.

Shannon Sarna is the editor of The Nosher.