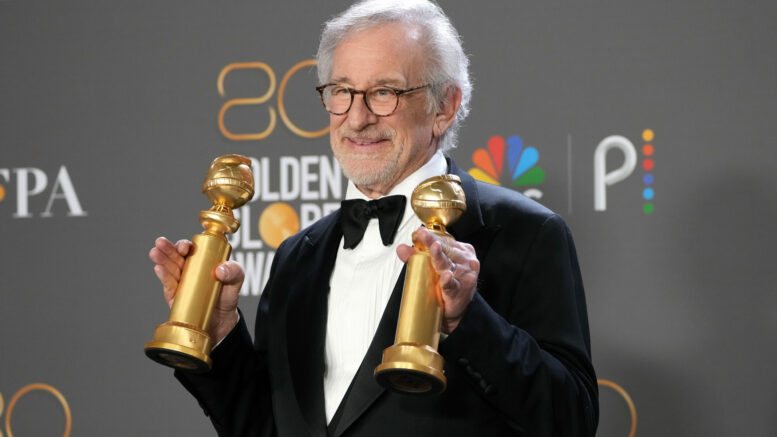 Steven Spielberg poses with the awards for best director and best picture for "The Fabelmans" at the 80th Annual Golden Globe Awards in Los Angeles, Jan. 10, 2023.(Kevin Mazur/Getty Images)

(JTA) — Steven Spielberg said he was the sixth-happiest person in the world after he won best director at this year’s Golden Globes awards for “The Fabelmans,” his autobiographical film about his Jewish family.

“I think … there’s five people happier than I am,” he said in his acceptance speech, which he said he had not prepared in advance out of superstition. “There’s my sister Anne, my sister Sue, my sister Nancy, my dad Arnold and my mom. She is up there kvelling about this right now.”

“Kvell” is the Yiddish word meaning to feel quiet pride in the accomplishment of others — and it’s closely associated with Jewish mothers who are proud of their children. Spielberg’s mother, Leah Adler, was the owner of a popular kosher restaurant in Los Angeles who died in 2017. His father Arnold, who helped him make his first movie, died in 2020 at 103.

“The Fabelmans,” which also won best picture among dramas, tells the story of a child who falls in love with filmmaking and laces his family’s Jewish identity into the storytelling. The character based on Adler is played by Michele Williams, a non-Jewish actor who is raising her children Jewish, while Paul Dano plays the character based on Arnold Spielberg.

During the awards ceremony, host Jerrod Carmichael joked that he watched “The Fabelmans” with Kanye West “and it changed everything for him” — alluding to the rapper’s months-long antisemitic tirade that has cost him millions in sponsorships and led to him becoming a show-business pariah. Addressing Spielberg, Carmichael said, “That’s how good you are. You changed Kanye West’s mind.” (In response, Spielberg clasped his hands in mock prayer.)

Elsewhere, Spielberg was thanked from the stage even by actors who did not appear in his film: “Everything Everywhere All At Once” star Ke Huy Quan, who won best supporting actor in a comedy, thanked the director for giving him his first big break in “Indiana Jones and the Temple of Doom” at the age of 12.

“I like very much the sort of easy way that Jewishness lives in this movie. It’s a very profound part of Steven’s identity, and of the Fablemans’ identity,” Spielberg’s collaborator, the Jewish writer Tony Kushner, said at a September film festival before the movie’s wide release. “But it’s a movie that’s about Jewish people, rather than entirely or exclusively about Jewishness or antisemitism or something. So it’s not a problem, it’s who they are.”

The film has been a critical darling but Spielberg’s worst-ever performance at the box office, where it is unlikely to bring in anywhere close to the $40 million spent to make it. (Many theater releases are struggling in a climate where audiences are accustomed to watching movies at home.)

Spielberg’s attendance at the ceremony was notable because many actors and directors boycotted last year’s pared-down event over years of scandal at the Hollywood Foreign Press Association, which hands out the awards. The group was criticized over conflicts of interest by its members and for including few Black members; it says it has addressed both issues.

Also winning at this year’s Golden Globes was Jewish actress Julia Garner for her Netflix show “Ozark” and Justin Hurwitz, who was named best original score for “Babylon.” The Jewish songwriter has won all four of the Golden Globes for which he has been nominated, all for work with the filmmaker Damien Chazelle, his college roommate. Chazelle attended Hebrew school at a New Jersey synagogue and traveled to Israel with his classmates despite being raised by Catholic parents.

Ukraine’s Jewish president Volodymyr Zelensky also made a special pre-taped appearance at the Globes, thanking Hollywood for supporting Ukraine in its ongoing war with Russia and making a reference to the awards ceremony’s origins in 1943 in the waning years of World War II.

Be the first to comment on "Steven Spielberg on ‘Fabelmans’ Golden Globe: My mom is ‘up there kvelling’"