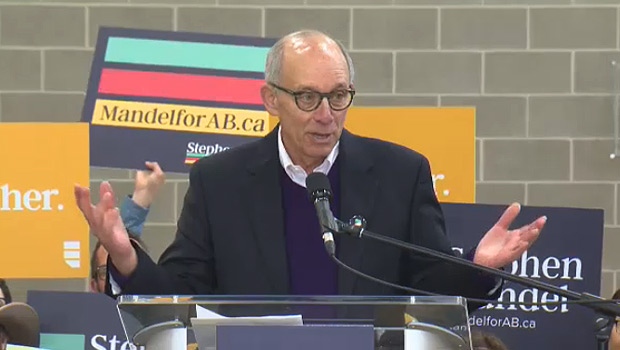 Former Edmonton Mayor Stephen Mandel announced his bid to be the leader of the Alberta Party. (CTV News Photo).

(January 10, 2018) – Stephen Mandel announced, this afternoon, that he’s entering the leadership race for the Alberta Party.

Mandel made the announcement in downtown Edmonton, an area he helped reinvigorate as a Mayor of the city for three terms.

Mandel, a former provincial cabinet minister, is reentering politics because he’s deeply concerned the province is at a critical crossroads in its 113-year history. He says the province is lacking pragmatic, forward-thinking and decisive leadership.

“Alberta is upside down right now. Our economy is fundamentally changing. Many are worried there is no direction and some think our best days might be behind us,” Mandel said.

“We need to bring people together, from different backgrounds and ages, to dream big to build a better tomorrow for our province. It needs to be a positive, bold plan that is both fiscally responsible and socially progressive.”

“While others spend their time and energy attacking and trying to divide Albertans, let’s be the Party that inspires.

“Let’s give Albertans something to believe in and to root for,” he said.

Mandel is scheduled to travel to Calgary on Thursday to hold a campaign launch party. He has also scheduled events across the province during the leadership race, which concludes on February 27.