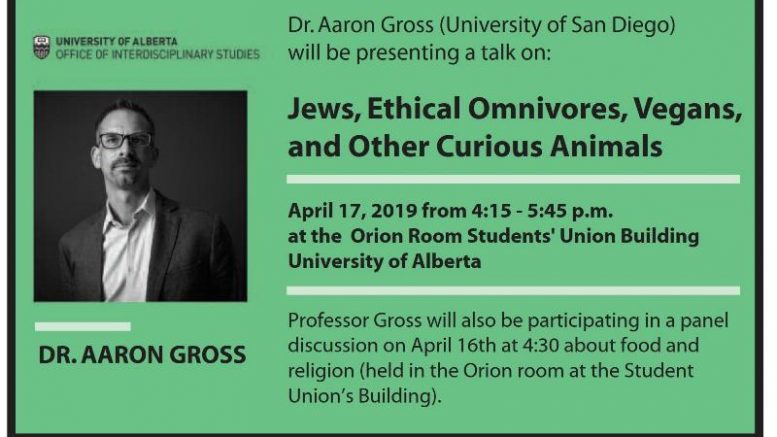 The lecture – “Jews, ethical omnivores, vegans, and other curious animals” –  will be held at the Orion Room, Students’ Union Building from 4:15 to 5:45 pm.

“All life eats,” explains Dr. Gross in his description of the lecture. “Overwhelmingly, we eat what others around us are eating.

“However, some of us – for example, many Jews, so called ‘ethical omnivores,’ and vegans – make a point of eating differently. We are ready to risk inconvenience, expense, and even annoying, angering, or, sometimes, inspiring others in response to how we eat.

“Beyond the important questions of animal cruelty and ecology most commonly discussed in connection with meat, what does the question of meat have to do with sex, gender, race, religion, and Judaism?”

Professor Aaron S. Gross is a historian of religions at the University of San Diego who focuses on modern and contemporary Jewish thought and ethics. Thematically, Gross’s work centers on the study of animals and religion, and food and religion. He is active in the leadership of the Society for Jewish Ethics and the American Academy of Religion’s Animals and Religion Group, and founded and serves as CEO of the nonprofit advocacy organization, Farm Forward.

In addition to the lecture on April 17, Dr. Gross will also be participating in a panel discussion on April 16th at 4:30 pm about food and religion (held in the Orion room at the Student Union’s Building).

Be the first to comment on "Special lecture on April 17 at UAlberta: Jews, ethical omnivores, vegans and other curious animals"