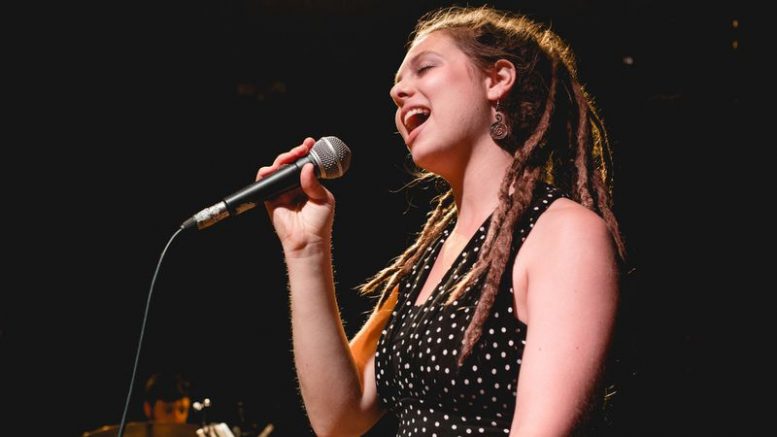 Led by Sivan Arbel, pictured, the Israeli jazz ensemble Sivan Arbel Quartet will perform at the Ironwood Stage and Grill in Calgary on Jan 30 and at the Yardbird Suite in Edmonton on Jan 31. (Courtesy photo)

(January 2020) – Sivan Arbel, a critically acclaimed Israeli vocalist, bandleader, composer and arranger, based in Brooklyn, NY will be bringing her jaw-dropping jazz fusion to Alberta this week with performances in both Calgary and Edmonton.

Sivan will be at Calgary’s Ironwood Stage and Grill on January 30 and at the Yardbird Suite in Edmonton on January 31.

A worldwide performer and an effervescent talent on the international jazz scene, Sivan’s original music, arrangements and lyrics open a window into her inner world. She recently released her second album Change of Light and will be introducing it to the Alberta audience.

With the exception of a brilliant arrangement of a classic Israeli folk song Water Song, the music and lyrics on Change of Light were written by Sivan and are based on her personal experiences.

Alberta Jewish News caught up with Arbel and asked her about the inclusion of the folk song on the new CD. She explained that the song had been part of a set list for a Shabbat gig. “I was excited to perform it because it is such a lovely song with such a beautiful melody. But when I got to rehearsal, I learned that it had been dropped from the list. I was so bummed that I brought it to my band and we did our own arrangement of the song, developed our own version and it has been really well received.”

Change of Light has received international recognition for its emotional range, musicality, rhythms and passion. It features seven original songs, some in English and some in Hebrew, all written by Arbel. When asked how she decides if a song will be English or Hebrew, she explained, “It’s like when I am dreaming, sometimes I dream in English and sometimes in Hebrew. I’ve been living in New York for quite a while and I grew up in a home where English and Hebrew were both spoken so I think that whichever one just comes from the sky through me, ends up on the paper,  it’s always changing depending on where I am, what I’m doing, who I’m thinking of or what I’m thinking of. It doesn’t have any rules of its own.”

Arbel playfully layers her diverse artistic expressions with her love for jazz and musical influences grounded in her Israeli roots and global travels. As a performer, she lights the room and rivets audiences as she fuses her distinct rhythm and groove with scat improvisation, movement and dance.

“When I was in Israel I was very interested in and immersed myself in the jazz world, with several American and African influences. But since I’ve been in New York I’ve been exposed to more Israeli things and Israeli music that has just opened up my curiosity. I’ve been exploring some sounds with that, some rhythms with that and the more I explore the more it automatically influences my music.”

Sivan arrived on the New York City jazz scene in 2014 and has not looked back since. Since the release of her first album Broken Lines in 2014, she quickly made her mark on the local and international jazz scenes, performing at festivals and prestigious venues.

Now with the release of Changing Light, she is pleased to be performing the new songs. “I’m really excited to bring my music to Alberta and share it with everyone who comes to listen,” remarked Sivan.

“It’s my way of saying Shabbat Shalom because we’ll be in Calgary on Thursday night and in Edmonton on Friday night. I think it’s going to be really wonderful to share these evenings and our music with people from the Alberta community.”