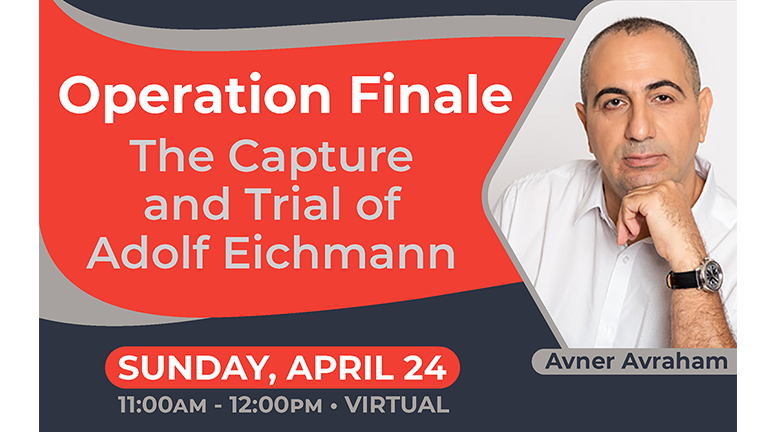 (AJNews) – Calgary Jewish Federation is gearing up for a second annual Shoah Week, providing extended opportunities for Albertans to explore themes related to the Holocaust in the lead-up to and during Yom Hashoah which this year takes place on Wednesday, April 27.

“The Jewish community and the larger Calgary community have been very receptive to the enhanced programming we have committed to during Shoah Week,” says Dahlia Libin, who co-chairs the Holocaust and Human Rights Remembrance and Education Department together with Marnie Bondar.

Operation Finale: The Capture and Trial of Adolf Eichmann

Avraham brings tremendous energy to this fascinating subject matter. While working for the Mossad – Israel’s legendary intelligence agency – Avraham discovered original documents pertaining to the capture and trial of Eichmann, a chief architect of the murder of six million Jews.

Deeply committed to offering multiple angles of view on the Holocaust, Marnie Bondar and Dahlia Libin say that Avraham’s live virtual presentation provides deep insight into the history of the Holocaust while at the same time relating a thrilling spy story.

“It was always Avraham’s dream to shed light on the details of Operation Finale,” says Bondar, who adds that Avraham’s talk hones in on what Israeli intelligence operatives needed to do in order to gather information, apprehend Eichmann in Argentina and transport him to Israel where he was tried in 1961 and executed the following year.

Operation Finale: The Capture and Trial of Adolf Eichmann takes place virtually on Sunday, April 24 at 11:00am. The program is free but requires pre-registration.

Calgary Yom Hashoah Commemoration and The Power of Love

The 2022 Calgary Yom Hashoah commemoration will be held virtually on Wednesday, April 27. The evening begins with a pre-recorded service at the Holocaust Memorial adjacent to the Calgary JCC. As always, clergy representing local synagogues are taking part in the service, with survivors placing stones in memory of loved ones murdered by the Nazis and their collaborators.

“As the virtual audience will see on Yom Hashoah, this was a very emotional moment for the survivors,” says Dahlia Libin. “It never gets easier for them, but it was profoundly moving for the survivors and it will be for those who attend this year’s virtual Yom Hashoah event.”

Immediately following the memorial service, Federation welcomes Sheryl Ochayn for a virtual exploration on the power of love during the Holocaust. Ochayn, a Harvard-trained lawyer, heads up the Echoes and Reflections program at Yad Vashem: World Holocaust Centre, Israel’s Holocaust museum

The Power of Love takes a deep dive into some extraordinary stories about people who refused to give up on individuality, humanity and love— even as they suffered brutality and loss during the Shoah.

“Everyone had a choice when the Nazis and their collaborators unleashed hell,” Bondar said. “You could be selfish, or you could dig deep to remain human and loving even during the worst of times.”

During her deeply evocative presentation, illustrated by photos and archives from the Yad Vashem collection, Ochayn will share a series of poignant stories about some individuals who—despite their dire circumstances— chose light and love over despair and darkness.

“These stories are uplifting and inspiring because they focus on powerful examples of resistance,” says Libin.

“The ultimate message is one of hope and resilience,” adds Bondar. “For many years, and for good and obvious reasons, the emphasis in Holocaust education was on the gravity of the Shoah. While we continue to acknowledge and honour this, especially in light of deeply disturbing current events, it is really critical as well that we honour acts of humanity. This program does that, and it is beautiful.”

The 2022 Calgary Yom Hashoah Commemoration takes place Wednesday, April 27 beginning at 7pm.  Preregistration is not required.  Simply go to www.jewishcalgary.org  and click on the Zoom link.

The Edmonton Jewish community will commemorate Yom HaShoah, Holocaust Remembrance Day on April 28, 2022 from 12 noon to 1 pm outdoors at the Alberta Legislature Grounds, adjacent to the Holocaust Monument  at 96th Avenue and 107 Street. The service will honour the Holocaust Survivors within the community and include readings and a service to memorialize and honour loved ones who were murdered in the Holocaust. More information is available at jewishedmonton.org.

The annual spring Holocaust Education Symposium will take place virtually May 2 – May 6 with approximately 5,000 Alberta students and their teachers expected to participate.

Prior to the pandemic, the symposium—organized by Calgary Jewish Federation— was hosted by Mount Royal University. Due to COVID-19, symposium will once again be held virtually in 2022.

“When the pandemic necessitated a move to online programming we experienced an unexpected but really positive outcome. We were able to welcome students and teachers throughout the province,” said Dahlia Libin.

“It is incredibly important that our outreach extends beyond Calgary to the smaller communities like Bowden and High River,” Marnie Bondar said.

University of Calgary History Professor Dr. David Bercuson will begin the symposium with an overview of the Holocaust providing historical context for the program that follows. Students will view the documentary Path to Nazi Genocide and will then see a newly created presentation featuring the USC Shoah Foundation testimony of Calgary Holocaust survivor Sidney Cyngiser. The virtual presentation includes the participation of Sid and Bronia Cyngisers’ grandchildren and will be followed by a live Q and A session with their daughter, Dr. Francie Cyngiser.

Mount Royal University is continuing the tradition of onsite Holocaust education despite the fact that the Symposium for high school students has – at least for now – moved online. Claire Kolman shared the Holocaust story and testimony of her late grandfather, Benek Herman, with MRU students and staff on Monday, April 11.

Second and third generation volunteers have been visiting schools virtually and in person to share survivor stories, reaching approximately 150 students at more than 20 schools in Calgary and Southern Alberta during March. Many more in-person and online presentations will be happening throughout the spring.

Mark your calendar for the premiere of Here to Tell: Faces of Holocaust Survivors, a breathtaking photo exhibit featuring the portraits and stories of Holocaust survivors who settled in Calgary or have a strong connection to this community.

The visually stunning exhibit, which runs May 27 through July 3, will be showcased by the Glenbow Museum at the Edison Building (the Glenbow is currently closed for renovations). Following its Calgary premiere, the exhibit will tour, with interest having already been expressed nationally and internationally.

Watch for further details in the April issue of AJNews, but if you cannot wait to get a glimpse of Here to Tell, you can order your own copy of the hardcover book. While you are there, check out the trailer of the behind-the-scenes documentary that will be screened as part of the exhibit.

For more information about Here to Tell: Faces of Holocaust Survivors, or to order your advance copy, go to www.heretotell.com.