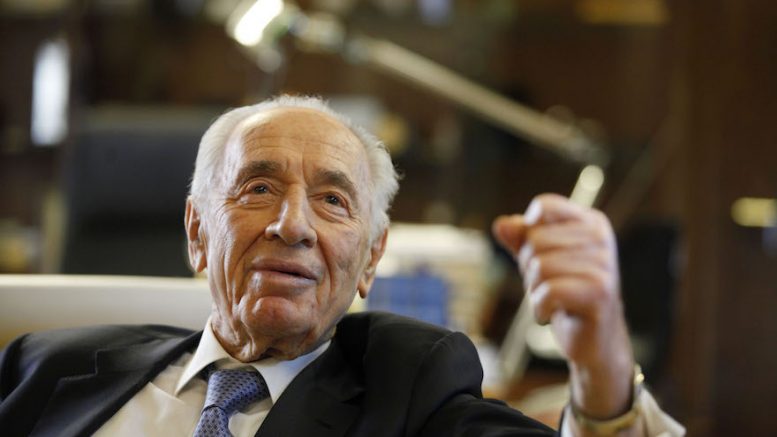 Israeli President Shimon Peres speaks during an interview in the President house on April 10, 2013 in Jerusalem, Israel. (Photo by Lior Mizrahi/Getty Images)

Peres died before dawn Wednesday September 28, 2016 at 93, Israel Radio reported. The former president suffered a massive stroke earlier this month and was reported initially to be in stable but critical condition. His condition was reported to have deteriorated dramatically on Tuesday afternoon. Israel Radio quoted his family, who were at his side, as saying he was “fighting until the end.”

The phoenix of Israeli politics, Peres continually reinvented himself as the country changed. He began his career in the Defense Ministry and was the architect of Israel’s nuclear program, but in his later years Peres was more closely identified with the quest for peace with the Palestinians. He was instrumental in negotiating the Oslo Accords, the landmark Israeli-Palestinian peace agreement, and was present on the White House lawn for its signing in 1993.

Though he served as prime minister three times without ever winning an election outright, and shared the 1994 Nobel Peace Prize for a peace that has yet to materialize, Peres emerged late in life as Israel’s beloved elder statesmen and a rare figure capable of uniting a fractious society.

Following the signing of the Oslo Accords, Peres emerged as Israel’s global ambassador for peace, predicting the emergence of a “new Middle East” in which conflict was supplanted by shared prosperity. Elected to the largely ceremonial role of president in 2007, talk of peace pervaded nearly every speech he gave. Well into his 90s, Peres still insisted he would live to see the day when peace would come.

Peace, however, doomed his political career. After middling political success in the 1980s, the Oslo Accords debilitated Peres’ Labor Party, which fell from power in 2001 with the outbreak of the second intifada and has yet to win another election. When Peres won the presidency in 2007, he was a member of Kadima, a short-lived centrist party.
As president, Peres rose again, this time as Israel’s wise old man. Free to rise above the political fray, Peres trumpeted Israel’s technological achievements and articulated its hopes for a brighter future. More than anything, he became a symbol of the country’s resilience — able to survive, thrive and remain optimistic — no matter the challenges.
“Shimon devoted his life to our nation and to the pursuit of peace,” Israeli Prime Minister Benjamin Netanyahu said in a statement Wednesday. “He set his gaze on the future. He did so much to protect our people. He worked to his last days for peace and a better future for all. As Israel’s President, Shimon did so much to unite the nation. And the nation loved him for it.”

Born Szymon Perski in Wiszniewo, Poland, in 1923, Peres moved with his family to Tel Aviv in 1934. At 20, he became the head of a Labor Zionist youth group, through which he met David Ben-Gurion, who would become Israel’s first prime minister. In 1945, Peres married Sonya Gelman, who had just returned from World War II service in the British Army.

The couple was married for 67 years, though they separated after Peres became a presidential candidate. Sonya Peres had long refused to play the part of political wife, and after Peres moved to the president’s residence in Jerusalem, she changed the name on her Tel Aviv mailbox to Sonya Gal, a Hebraicized version of her maiden name. Sonya Peres died in 2011 at 87.

In 1947, Peres joined the Haganah, managing arms purchases and personnel. After Israel gained independence the following year, he continued working in the Defense Ministry, becoming its youngest-ever director-general in 1952 at 29. In that capacity he expanded Israeli arms purchases from France and later helped manage the 1956 Sinai Campaign. He also founded Israel’s arms production industry and led efforts to develop a nuclear weapon.

Peres was first elected to the Knesset in 1959 with Ben-Gurion’s ruling Mapai party, becoming deputy defense minister. He would serve in the Knesset for an as-yet unmatched total of 48 years. Peres remained a close Ben-Gurion ally, splitting from Mapai with him in 1965 to form a rival party and then rejoining Mapai when it became the Alignment in 1968.

After serving in several minor ministerial positions, Peres became defense minister in 1974 under Prime Minister Yitzhak Rabin. Peres was a territorial hawk, opposing early proposals for West Bank withdrawal and supporting settlement expansion. When Rabin resigned amid scandal in 1977, Peres briefly became acting prime minister, then lost the post when the Alignment was defeated in the 1977 election by Menachem Begin’s Likud party.

Peres headed the Alignment — the precursor to today’s Labor Party — for the next 15 years, contesting three more close elections with Likud. The two parties formed a unity government following the 1984 elections — Peres was prime minister from 1984 to 1986, then foreign minister under Prime Minister Yitzhak Shamir from 1986 to 1988.

As foreign minister in 1987, Peres conducted secret negotiations with King Hussein of Jordan for Israel to withdraw from the West Bank as part of an Israeli-Jordanian peace treaty. But Shamir rejected the proposed agreement, and the following year Jordan unilaterally relinquished its claim to the West Bank.

After the Alignment lost the 1988 elections, Peres again joined a Likud-led government as finance minister, but tried to overthrow the government two years later. In what became known as the Dirty Trick, Peres assembled an Alignment-led coalition with leftist and haredi Orthodox parties, only to see it fall apart after he received a mandate to form a governing coalition. He lost his party’s chairmanship to Rabin in 1992, and again became foreign minister when the party, now renamed Labor, won elections that year.

Under Rabin, Peres was the architect of the Oslo Accords, which gave the Palestinians autonomy in parts of the West Bank and Gaza. He shared the Nobel Peace Prize with Rabin and Palestinian leader Yasser Arafat.

“Israel’s role in the Middle East should be to contribute to a great, sustained regional revival,” Peres said upon accepting the prize. “A Middle East without wars, without enemies, without ballistic missiles, without nuclear warheads.”

After Rabin was assassinated in 1995, Peres became acting prime minister, but lost the post again in a close race with Likud’s Netanyahu. Following his defeat in ’96, he founded the Peres Center for Peace, which runs programs aimed at regional reconciliation.

The next year he won a race for Israel’s largely ceremonial presidency. As president, Peres stayed largely above the political fray, though he conducted secret negotiations with Palestinian Authority President Mahmoud Abbas in 2011, culminating in a peace deal that Netanyahu’s government rejected. After leaving the presidency, Peres remained largely silent on politics.

“A light has gone out, but the hope he gave us will burn forever,” Obama said Tuesday night in a statement. “Shimon Peres was a soldier for Israel, for the Jewish people, for justice, for peace, and for the belief that we can be true to our best selves — to the very end of our time on Earth, and in the legacy that we leave to others.”

Be the first to comment on "Shimon Peres, last of Israel’s founders, dies"