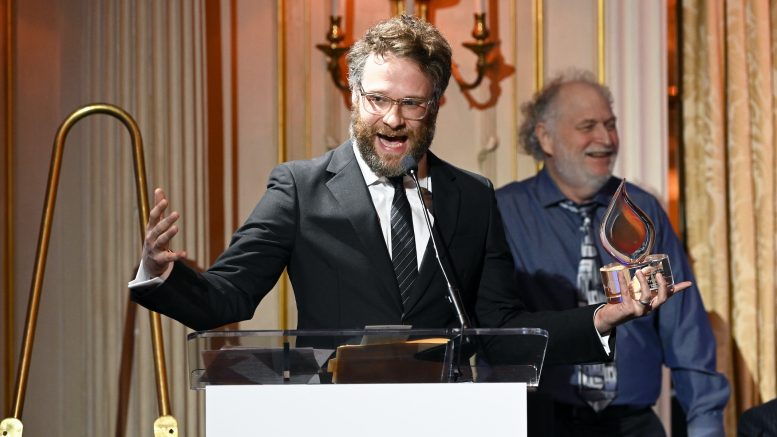 (JTA) — In a new interview, Seth Rogen said his comments about Israel being a bad idea for a state were made in jest but affirmed that he found his childhood education about the country, which he received through Jewish schools and camps, to be problematic.

“I don’t want Jews to think I don’t want Israel to exist and I understand how they could have been led to think that,” the actor and comedian said on a Zoom interview with Haaretz reporter Allison Kaplan Sommer published Monday.

“I was just not given a full picture of the situation and I understand it’s a wildly complex picture to give a child,” he said, adding that he knows Jewish parents who “are taking it on themselves to try to paint a more complete picture of how complex a situation it is.”

The interview came a day after Jewish Agency Chairman Isaac Herzog released a statement saying he had talked with Rogen about “the current situation in Israel,” and that Rogen had “apologized” for his comments. (The Jewish Agency is a nonprofit that works to bolster Israel-Diaspora relations.) Rogen told Haaretz that he did not tell Herzog that he could make details of their talk public.

“I did not apologize for what I said. I offered clarity. And I think [Herzog] is misrepresenting our conversation,” Rogen told Haaretz. “At no point did I give him permission to publish any part of the conversation.”

The new interview and ongoing conversation come nearly a week after Rogen discussed Israel on Marc Maron’s popular “WTF” podcast, and the pair’s comments sparked an outcry among many Israel supporters. Rogen said he was “fed a huge amount of lies about Israel” as a child in Vancouver and that Israel’s organizing principle — grouping Jews together in one state — “doesn’t make sense.”

He clarified to Kaplan Sommer that the principle was “a joke I’ve heard Israelis make.” He also said that comedy inherently carries the risk of being perceived as offensive.

“If you take any comedic monologue and treat it as though it is not based in humour, there’s probably some very questionable thoughts in there,” Rogen said.

Rogen, who reiterated to Haaretz his pride in being Jewish, also discussed “An American Pickle,” his film that comes out this week, which he called “probably the most Jewish movie that almost anyone’s ever made.”

He was on site shooting the film in Pittsburgh when the 2018 Tree of Life synagogue shooting occurred.

I was about a mile away from it when it happened. It was, in a sense, very scary, but in another sense I remember thinking: I’m about to make the most Jewish movie I’ve ever made, probably the most Jewish movie that almost anyone’s ever made, in the wake of the most violent antisemitic attack in the history of America, in the same city. And there was a sense that it suddenly became much more important to do it. And any fear I had about how Jewish a movie it was, I honestly thought that if there was ever a time to double down on this, now was that time.

Be the first to comment on "Seth Rogen: Israel should exist, but I’m not sorry for my critique of Jewish education"