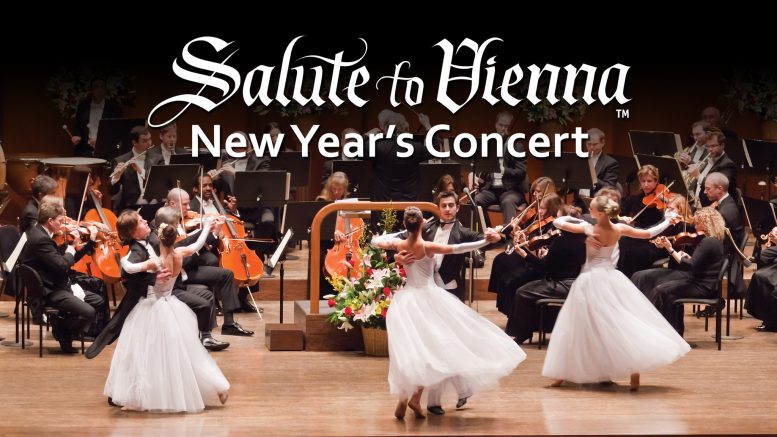 EDMONTON: Usher in the New Year with the dazzling spectacle of Salute to Vienna New Year’s Concert  at the Winspear Centre n Edmonton at 2:30 pm on December 30, 2018. This concert, celebrating 24 years in North America, is a crystalline moment of timeless beauty.

Inspired by the annual Viennese “Neujahrskonzert”, this frothy celebration blends acclaimed European singers and dancers with a full orchestra in a fresh new programme each year. Step into Vienna’s golden age and spend the afternoon caught up in the joy, grandeur, and music of a time past but not forgotten.

On December 30, join Viennese conductor Alexander Steinitz and The Strauss Symphony of Canada, who will perform with Viennese soprano and tenor, Lilla Galambos and Oliver Ringelhahn, members of the Kiev-Aniko Ballet of Ukraine, and International Champion Ballroom Dancers.

Audiences young and old will be carried away by the first notes of the eternal Blue Danube Waltz.  European singers, ballet, ballroom dancers in gorgeous costumes will usher in 2019 with a beautiful concert of light classics, in the style of Vienna’s annual televised Neujahrskonzert.

Marion and Attila Glatz, co-producers and husband and wife team, both grew up in Europe: Attila in communist Hungary and Marion in Austria. The “Neujahrskonzert” — the 80-year strong tradition of new year’s concerts, recorded live in Vienna and broadcast worldwide– was something incredibly significant to them both, before they ever met each other.

Attila describes it: “Listening to that uplifting music year after year—on the radio long before the television was around, we looked forward to the light it brought into our lives and the sense of freedom it provided from the hardship of those most difficult political times behind the iron curtain.”

To date, 338 Salute to Vienna concerts have been produced in the USA and 185 in Canada. Glatz feels it’s his calling to bring this cherished tradition to new audiences: “This music is a flame of inspiration for us to carry forward and it is now a responsibility for us to ensure its protection by developing new audiences who will appreciate its beauty and importance for years to come.”

Be the first to comment on "Salute to Vienna returns to Edmonton at Winspear Centre: Dec. 30 at 2:30 pm"