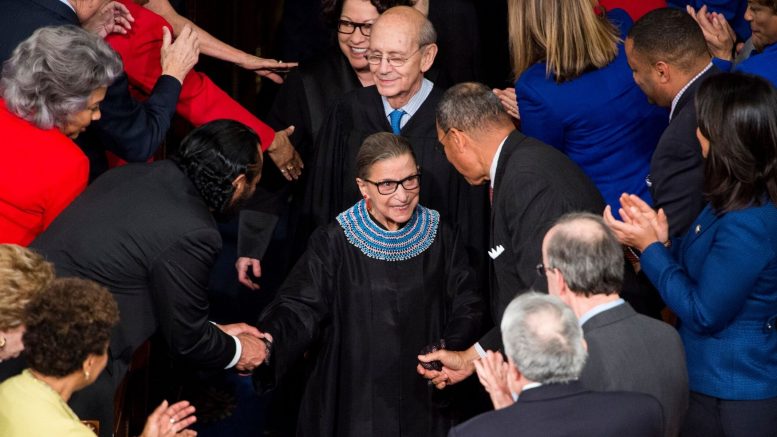 WASHINGTON (JTA) — As she made history during her illustrious life, Ruth Bader Ginsburg will do so upon her passing: She will become the first Jew to lie in state at the Capitol building, and the first woman, Jewish or non.

The former Supreme Court justice who died Friday aged 87 will first lie “in repose” at the Supreme Court building, on Wednesday and Thursday, before moving to the Capitol on Friday, House Speaker Nancy Pelosi announced Monday.

Lying in state is reserved for only the most significant and revered public figures. The plan marks a departure from Jewish tradition, which dictates that a body should be buried within 24 hours, with some exceptions, including the Sabbath and time to gather relatives. (Non-Orthodox traditions have made allowances for other exigent circumstances.) No information on Ginsburg’s funeral has been announced.

Ginsburg will be only the 35th person to lie in state at the Capitol. The first was Henry Clay, the revered Kentucky senator who died while still in office in 1852. The second was President Abraham Lincoln, assassinated in 1865. Ginsburg’s coffin will lie on the Lincoln Catafalque, the Supreme Court said.

Ginsburg will also be only the second Supreme Court Justice to lie in state at the Capitol, after William Howard Taft, who had also served as president, in 1930.

There have been eight Jewish Supreme Court justices; the five who predeceased Ginsburg did not lie in repose. Not every justice is accorded the honor — most recently, Antonin Scalia, Ginsburg’s close friend and ideological opposite, lay in repose after his death in 2016. The Supreme Court did not supply a list of justices who have lain in repose.

The most recent person to lie in state at the Capitol was Georgia Rep. John Lewis, the civil rights legend who died in August.

The plan to have Ginsburg lie in state means that the Jewish period of mourning, called shiva, could be shut short for her. Shiva, a seven-day period when immediate family members separate from the world and are comforted by their community, traditionally begins right after a funeral and is ended early by holidays such as Yom Kippur, which begins Sunday night.